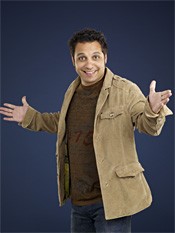 Yukster Johnny Sanchez sums up his debut season on MADtv as "a dream come true," since he grew up on episodes of Saturday Night Live. But he thinks the two shows don't compare. "The difference is with the writing on MAD," says Sanchez, who's in town this weekend for a series of stand-up gigs. "Many of the writers were performers themselves, and they're really good at writing. So the sketches are performed well." Now that he's on hiatus, Sanchez is touring the country to set the record straight about himself: Although he's Latino by ancestry, he's still a California homeboy at heart. "On the inside, I feel very all-American. But on the outside, I look like nachos and cockfighting," jokes Sanchez. "That's my credo." Sanchez goes onstage at 7:30 tonight and 7:30 and 10:15 p.m. tomorrow and Sunday at Hilarities, 2035 East Fourth Street. Tickets are $15 to $23. Call 216-241-7425 or visit www.pickwickandfrolic.com.
Fri., June 20, 7:30 p.m.; June 21-22, 7:30 & 10:15 p.m., 2008