Hell of a Catch 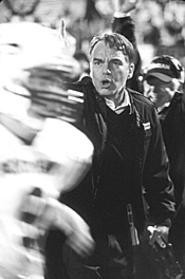 There are at least three movies contained within the covers of H.G. Bissinger's best-selling 1990 nonfiction book Friday Night Lights. One is concerned with the socioeconomic life of a small West Texas town built on the wobbly foundations of oil and racism, and the out-of-whack worship of a high school football team. Another would deal with the inexplicable life of crime pursued by the star players on a Dallas high school football superpower; forfeiting dreams of playing college and pro ball, they would go from playoffs to prison. And there's yet another potential film about the season of the Permian Panthers, a team believed to be destined for the Texas high school football title in 1988. Peter Berg, the Chicago Hope star who most recently directed the Rock in The Rundown, chose the latter course for his adaptation, presumably because it's more fun to show a guy being flipped like a medium-rare burger during a crushing tackle than it is to delve into the politics of a school district that spends a fortune on a new stadium and an embarrassing pittance on English textbooks.

Which leaves us with a familiar-feeling football movie that culminates in the Big Game, sprinkled with glimpses of the off-the-field lives of young men who would run with the ball as far as they could from the small town that adores them to the point of abhorring them. Friday Night Lights lacks the gravitas of Bissinger's book, but that's a given; Berg, the Pulitzer Prize-winning writer's second cousin, is out to entertain the masses, not educate them with a lecture on small-town civics. So the season unfolds with a familiar montage of crashes and thuds -- the sound of snap counts and snapped ligaments, the latter belonging to star running back Boobie Miles (Derek Luke), whose visions of scholarships and million-dollar contracts are shattered during the first game of the season in the time it takes to blink an eye. The football sequences could come from any movie -- Any Given Sunday shrunk down to homecoming size.

But Berg rescues Bissinger from the teen-beat condescension given his material when MTV ripped it off wholesale for 1999's Varsity Blues. Berg, like Bissinger, loves the young Panthers: quarterback Mike Winchell (Lucas Black), who tends to a mother who "ain't right" and believes himself cursed by bad luck and a bad arm; wide receiver Don Billingsley (Garrett Hedlund), son of a state champion (played with unexpected ferocity by country singer Tim McGraw), who never lets him forget it between swigs of bourbon and swings of his fist; tight end Brian Chavez (Jay Hernandez), whose good grades mean he doesn't need football as badly as his teammates do, which doesn't stop him from playing hurt more than anyone else; and Boobie, whose bum leg nearly ruins a season and devastates the ambitions of a young man and the loving uncle who raised him. Leading them is Gary Gaines (Billy Bob Thornton), a decent man who occasionally forgets that he coaches children who are not yet men.

Friday Night Lights' Winchell looks lost and terrified in the haze of a weekend throwdown, a timid, self-loathing square-jawed angel amid the prairie hell-raisers. Early in the movie, he reluctantly goes upstairs with a young blonde; she's looking to nail the stud QB, who may be her ticket out of Odessa. But their encounter goes horribly awry, and she accuses him of being gay, presumably because he's unwilling or unable to perform. Things go even worse for Billingsley, whose father catches him with a girl on the couch and turns an evening of screwing around into a torturous, humiliating lesson in how to hold on to a football. These guys can't turn around without someone -- a parent or booster-club member or just some random fan -- reminding them of how good they're supposed to be and had better be . . . or else.

The movie works because Berg never forgets to keep his heart and not just his head in the game. The football sequences -- especially the climactic game against the mighty Carter Cowboys of Dallas -- are thrilling, bruising, unrelenting; the music cues are especially canny, down to the use of the Stooges' "I Wanna Be Your Dog" during the second half. But ultimately, it's the nasty stuff on the sidelines that grabs and keeps our interest -- the veiled threats made against Gaines by surly boosters who plant "For Sale" signs in the coach's front yard after a loss, Boobie's confrontation with the doctor who tells the running back he'll never play again, and Don's run-ins with the old man, who taunts the kid with his own championship ring. Moments like these make Friday Night Lights the rare football movie that runs up the score.