Hell of a Long Day

24 has been the most talked-about show of the season and for all the wrong reasons. 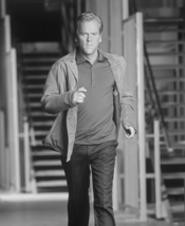 There cannot be man, woman, child or beast alive who does not know that on November 6, Fox will debut its new series 24. Long before the fall season was to begin, it had already been appointed the most anticipated and beloved show of the year--by critics who had seen only one episode, no less. Much was made of its gimmick: The series will be told, more or less, in real time, meaning each episode covers one hour of one day. And much was made of its plot: The head of the government's Counter Terrorist Unit, Jack Bauer (Kiefer Sutherland), has a single day to stop an assassin's plot to execute David Palmer (Dennis Haysbert), an African-American senator and the first black man with a viable shot at the presidency. And in case one missed the extensive press coverage, Fox has beaten the faithful about the head and torso with a bludgeoning ad campaign; it's impossible to watch the network for 10 minutes without stumbling across a 24 promo, accompanied by Limp Bizkit's Fred Durst growling that it's "just one of those days." It's as subtle as electrodes attached to the nipples.

Then there has been the kind of publicity no new network series wants: In the days and weeks since the terrorist attacks of September 11, 24 has been chief among the series mentioned whenever talking heads gather on TV to discuss the need for the entertainment industry's restraint in the wake of televised real-life horror. The show's pilot episode had long been available to TV critics, and its climactic scene--in which a female terrorist leaps from a 747 seconds before we see the airplane blown to bits--overshadowed whatever else the show is about. As far as audiences were concerned, that's all the show dealt with: terrorists, airplanes, explosions, corpses.

"It's not the way we want them to be talking about the show," says the series' co-creator Joel Surnow, "but I guess..." Long pause. "It's fine."

If Surnow, who conceived 24 a year ago with partner Robert Cochran, is to be believed, terrorism is not a central plot. (At press time, only the pilot had been made available to critics.) Rather, he insists, it's a show about two men--Jack Bauer and David Palmer--trying to keep their tenuous family ties from being torn asunder in the midst of crisis; Jack's 15-year-old daughter Kimberly (Elisha Cuthbert) has gone missing, while David's trying to keep a scandal from becoming public on election day. It's also a show about office politics: Jack cannot rely on his colleagues--one likely is in on the hit--nor do they trust him, after he slept with one co-worker (played by Sarah Clarke) and busted three others for taking bribes. Surnow constantly reminds that despite the media's bounding them together in a neat little package, 24 is not The Agency, CBS' new set-in-the-CIA series that had to scrap its pilot, with references to Osama bin Laden, and reschedule another episode that dealt with anthrax.

"We're really not a terrorist-of-the-week show," he says, as much to deflect criticism as explain what the show's really about. "It's a much smaller, more contained story we're telling than that. It's funny, because we did have the explosion of the plane in the pilot, but we really aren't doing stuff like that in the series. In the first 12 episodes, that's really the only terrorist act as such that we even have in the story line. It just happened to be in the first one, so we get a little more for it. I think the subtext of our show is all emotional...and that subtext drives the whole show. That's why it's not a terrorist show. That's why it's not like The Agency."

Last week, Fox sent out a revised version of 24's pilot that no longer contains the graphic image of the airplane's destruction; instead, all we see are small pieces of flaming debris in the nighttime sky--different visual, though the impact and intention are no less visceral. It also trims a second or two of a scene in which the terrorist is seen injecting a stewardess' neck with some kind of knockout juice. But the plane crash could not be deleted in its entirety: The explicitness could be muted, but the act itself is central to at least the first six episodes. To eliminate it would have meant pushing the show back and spending millions of dollars Fox doesn't have in these tenuous economic times. (Indeed, the revised pilot also loses a lot of expensive music by the likes of Madonna and Radiohead, a result of a tightened budget post-September 11.)

"The first week, everything was swirling around," Surnow says of the days after the attacks. "But after that, our first instinct was, 'Should they try and push us back even further? Is it going to take more time?' Nobody knew what the hell was going on in the world, but once we got pushed back a week and things started to settle down after a couple of weeks, we went to Fox and said, 'We'd like to lose that,' and they were happy to do it as well."

The irony is, even as some TV shows self-edit content and feature filmmakers digitally erase the World Trade Center from New York's skyline, it took only moments, in pop-culture time, for television to make fiction out of terrifying fact. NBC's Third Watch has already aired three episodes directly addressing the events of September 11; the first, in which real-life firefighters and police officers addressed the terrorist attacks on Manhattan, walked that fine line between heartbreak and exploitation.

The West Wing bowed this season with a lecture masquerading as entertainment; not since Dragnet has a network series been so condescending and pedantic. In its forthcoming premiere, N.Y.P.D. Blue has shoehorned a handful of clumsy references to the destruction of the World Trade Center. Even those clammy do-gooders at Pax are pressing Billy Ray Cyrus into duty: His show Doc, about a country doctor living in Manhattan, will feature an episode about a firefighter who survives the collapse of the Twin Towers. And that doesn't even take into account the network newsmagazines that scare the hell out of us with hourly anthrax updates by telling us not to, ahem, panic about anthrax.

So much for letting wounds heal. So much for giving us some distance and letting the nightmares fade.

But maybe that was to be expected, even after the hand-wringing that took place in the days after the attacks. Maybe it's because those horrific events happened on television--those planes, those buildings, those flames, those bodies--that TV feels the need to respond so quickly, even if it also does so clumsily on occasion. As has been said more than once since September 11, at least fiction provides the one thing fact does not: closure. The president warns of a prolonged war, but that doesn't stop the networks from giving us a tidy resolution, an ending (though, not always a happy one). Real life is unsatisfying: It's nothing but government talking heads, black-and-white shots of bombs hitting (and missing) their targets, grainy videophone footage of reporters miles from the action. And so fiction steps in to make us feel better, if only for the moment.

"Closure really means uplifting," says Surnow, who was a show-runner on The Equalizer and a writer for Miami Vice and Wiseguy. "People want to be uplifted. They want that in their leaders, and they want that in their entertainment. In England, their art depicts the grimness of life, and we're almost childishly destined to want to have heroes and want to see heroism. That's how we see ourselves as America: We're the heroes to the world--the white knights--and I think it makes people feel good."

In the weeks after the attacks, movie studios postponed releasing films with terrorist themes, and theater owners hurried to fill the multiplexes with feel-good product. Network executives and others have suggested that as new series are canceled, they will be replaced by fluffy shows--light romantic fare, the stuff of smiles. The return of Friends to the top of the Thursday-night schedule, where it was once beaten soundly by Survivor (and never has a series' name rung so hollow), confirms their motives; audiences want their comfort food, their happy half-hour.

But Surnow makes the case for shows that deal with the uncomfortable reality--shows that inform our real life by letting make-believe do the heavy lifting. He mentions a friend who went to a network to pitch a show about an undercover law enforcement official infiltrating a criminal organization, but he had trouble coming up with who that organization ought to be. Should it be a group of money-launderers? The Mafia? Everything he came up with felt phony and pointless--save for a story about penetrating a radical terrorist organization. "That is relevant," Surnow says. "That helps me as a viewer." But there is no way a network would touch that--not now, not with ground zero still smoldering and so many bodies still unaccounted for.

Surnow likes to say that he's a conservative who hates art that indulges in "America-bashing"; he has no tolerance for conspiracy-mongers, for filmmakers and show-runners who posit ours is a corrupt government. At the end of the day, he insists, 24 is a feel-good show--one about "hope," he says. He hopes only that people will watch it that way, without prejudice. It's not just a show about a plane blowing up, he says. It's about victory.

"I think people are going to be disappointed if they come in expecting to see us deal with terrorism every week, because it's not that kind of show," he says. "We want people to feel like the good guys are competent and that they ultimately will prevail, even though it's gonna be bleak at times, and it will be. This show has some really hard stuff in it, and it will continue to do so, but ultimately, the good guys will prevail."