A pair of local comedians fall from grace.

May 18, 2005
comment
Bruce Springsteen Wolstein Center at CSU Sunday, May 15 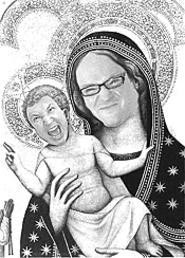 Jeff Blanchard, one-half of the Hearts of Darkness comedy duo, finds it oddly satisfying that he and Mike Baker are staging their latest production, The House of the Holy Tour, in a church. "How many old churches are out there where we can do a show like ours?" Blanchard says of this weekend's performances at the Russian Orthodox Church, which Cleveland Public Theatre has converted to a performance venue. "If you like Everybody Loves Raymond, stay home. There's nothing huggy and kissy about our show." While they never share the stage, Blanchard and Baker throw similar punches at politics, current events, and of course, religion. "Comedy was originally for adults," says Blanchard. "If you're offended by somebody saying fuck, what's the matter with you? We're not doing this to get a sitcom. I don't even want to do clubs anymore. I want to do performance-art comedy in theaters and churches." Show time is 9 p.m. Friday and Saturday at Orthodox, 6203 Detroit Avenue. Tickets are $7; call 216-291-2276. -- Michael Gallucci

Neil Giraldo sounds more like a football coach than the director of the Contemporary Youth Orchestra's Fire Away concert. The Parma native and his rock-diva wife Pat Benatar will perform with this orchestra made up of 97 students from 40 high schools in Northeast Ohio. But here's a word of warning from Giraldo: The teen musicians had better listen up if they're going to tackle the couple's hits like "Hit Me With Your Best Shot" and "Shadows of the Night." "If I say, Whoa, you guys are way to the left of this,' then we'll talk about it," he says. "I'll be right in their face. They'll feel like they're getting coached from somebody who's ready to win the Super Bowl." Showtime is 7:30 p.m. Tuesday at Cleveland State University's Waetjen Auditorium, 2001 Euclid Avenue. Tickets are $30; call 216-241-6000. -- Cris Glaser

Headphones is a side project for Pedro the Lion's David Bazan, which is kinda peculiar, since the perpetually personnel-shuffling Pedro is pretty much a one-man band these days anyway. On Headphones' just-released self-titled debut, Bazan trades in the wordy indie pop for synth-heavy lo-fi rock. It's carefully crafted and overly clever at times, but Bazan seems pretty committed to the project, which he's taking on the road. They're at the Grog Shop (2785 Euclid Heights Boulevard in Cleveland Heights) at 10 p.m. Saturday. Tickets are $10; call 216-241-5555. -- Michael Gallucci