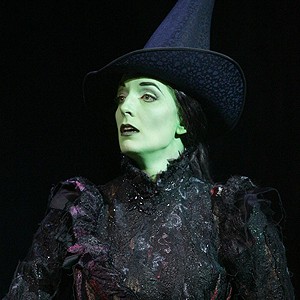 The award-hogging Broadway musical Wicked tells how a pair of childhood friends became the feuding witches of The Wizard of Oz. Stephen Schwartz's play (based on Gregory Maguire's novel) looks at the formative years of green-skinned Elphaba, who would become the Wicked Witch of the West, and her more popular sister, Glinda the Good Witch. It's set in Oz before Dorothy crash-lands and features plenty of special effects, music, and dancing.
Tuesdays-Fridays, 8 p.m.; Saturdays, 2 & 8 p.m.; Sundays, 1 & 6:30 p.m. Starts: June 21. Continues through July 9