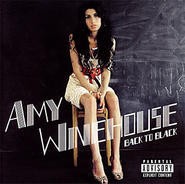 CD -- Back to Black: Amy Winehouse is a stumbling, slurring mess. And the British singer is proud of it -- laughing off failed alcohol treatment in the opening song, "Rehab," and boozing her way through other sultry torch tracks. She's also a pretty lousy girlfriend (see "You Know I'm No Good"). Producer Mark Ronson (who jazzed up Christina Aguilera last year) piles on the slinky, sexy grooves on this terrific R&B/pop/jazz/hip-hop hybrid.

CD -- Life in Cartoon Motion: Twenty-two-year-old Brit Mika checks in with the year's gayest CD, a fun, colorful pastiche of Queen-like operatics and Elton John-style pop. Lots of songs on this debut sound like other, more famous tunes -- which is the point. Mika has a grand time tying genres, decades, and influences together.

DVD -- The Queen: One of last year's best films is also one of its most understated. Helen Mirren (who snagged a Best Actress Oscar) plays Queen Elizabeth, forced to keep a royal stiff upper lip in the wake of Princess Diana's death. It's a magnificent performance, amped by Stephen Frears' sharp direction. Extras include commentary by Frears, the movie's writer, and a noted British historian. Jolly good!

BOOK -- Third Coast: Outkast, Timbaland, and How Hip Hop Became a Southern Thing: Music critic Roni Sarig might be a half-decade or so behind with this look at the Dirty South, but he rounds up all the crucial players. Even if his theory -- rap was born in the South -- is emptier than Master P's bank account, Sarig's profile of Miami, Houston, and New Orleans hip-hop has plenty of bounce. Yeeaaahhhh!