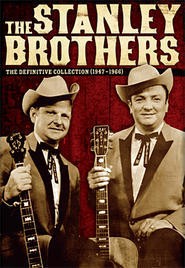 CD -- The Stanley Brothers: The Definitive Collection (1947-1966): This three-disc box gathers 60 tracks by the bluegrass pioneers, including a couple of tunes that showed up on the massively popular O Brother, Where Art Thou? soundtrack a few years back. Several unreleased songs bait collectors, but it's banjo-fueled weepers like "The Lonesome River" and "Man of Constant Sorrow" that seal Ralph and Carter Stanley's legacy.

VIDEO GAME -- Dance Dance Revolution Universe: The addictive game makes its Xbox 360 debut with a whole new set of songs by New Order, Sugar Hill Gang, and . . . Steppenwolf? The beats are as fast and furious as ever, keeping gamers (literally) on their toes as they attempt to replicate dance moves in Workout Mode, Quest Mode, and the super-fun Party Mode.

CD -- New Moon: The 24 songs on this two-disc set of Elliott Smith rarities were recorded between 1994 and 1997. That means fans of the multilayered Beatlesque pop found on later albums like XO and Figure 8 are out of luck. The spare, mostly acoustic tunes recall Either/Or's late-night confessionals. Early versions of faves like "Miss Misery" resonate even more since Smith's 2003 death.

MOVIE -- Spider-Man 3: Everyone's favorite webslinger contends with a pair of new villains -- Sandman and Venom -- in the third outing of this splendid series. But after his suit's cool makeover -- it's now black, sleek, and armed with new powers -- Spidey's real enemy turns out to be himself, as the suit unleashes its own hell. Prepare for another nonstop thrill ride. The movie opens Friday.

DVD -- SpongeBob SquarePants: Friend or Foe?: This disc features seven recent episodes from the best show ever about a yellow, absorbent pineapple-dweller. Highlight is the two-part "Friend or Foe?" -- which reveals the origin of Mr. Krabs and Plankton's longtime rivalry. The bonus photo gallery (featuring baby pics of some of Bikini Bottom's favorite residents) and extended storyboards are pretty cool too.

COURTESY FLUSH, PLEASE -- The Lost Tomb of Jesus: The Discovery Channel's controversial hit is resurrected as a director's cut DVD. James Cameron -- the Titanic director, who knows a thing or two about big, overstuffed features -- executive-produced this self-important documentary about a team of archaeologists who dig through tons of rocks to get to some coffins, one of which apparently belongs to the Messiah. It aims for Indiana Jones territory. Bridget Jones is more like it.