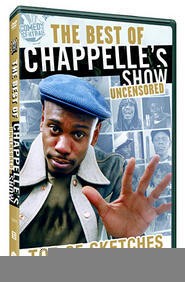 DVD -- The Best of Chappelle's Show Uncensored: This single-disc compilation of the greatest bits from the decade's funniest program includes a few new Charlie Murphy stories, as bait for folks who already own the three season sets. The sketches you know ("A Night With Wayne Brady," "Racial Draft") are worth watching again. And the Rick James riff still thrills, bitch!

CD -- Elvis Costello reissues: Costello's illustrious back catalog has switched hands once again. Prepping for re-release of his first 11 albums, his new record company has put together two new compilations: The Best of Elvis Costello: The First 10 Years and Rock and Roll Music. The latter pulls together plugged-in album tracks. The superlative Best Of includes 22 classics -- from "(The Angels Wanna Wear My) Red Shoes" to "I Want You."

VIDEO GAME: Shrek the Third: This tie-in to the big green ogre's latest adventure can be as overblown and predictable as the movie at times. But it's also as fast-moving. It's available for almost every console, but we prefer the Nintendo DS version, which features cool cooperative multiplayer play in wireless mode -- so you and three pals can save Far Far Away as your favorite talking donkey or cat.

BOOK: Tearing Down the Wall of Sound: The Rise and Fall of Phil Spector: The centerpiece of this insightful bio is the kooky music mogul's last interview before he was charged with murder four years ago. Writer Mick Brown touches on all the usual subjects -- Spector's troubled childhood, his teenage genius, and his penchant for pulling guns on the artists he worked with. The book is the first to truly probe Spector's fractured mind, which eventually shattered.

COURTESY FLUSH, PLEASE -- The Best of Acoustic Jethro Tull: The flute-lovin' prog-rockers are barely tolerable plugged in, so imagine how insufferable they are when the amps are turned off. This 24-song CD spans the band's career, pulling cuts from albums like Living in the Past, Aqualung, and Thick as a Brick. Too bad they're not the ones you want to hear.