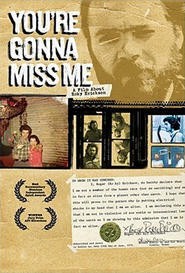 DVD -- You're Gonna Miss Me: Roky Erickson is pretty much the U.S. counterpart of former Pink Floyd member and LSD casualty Syd Barrett. This terrific documentary chronicles Erickson's story -- which includes consuming tons of drugs back when he was in '60s psych-rock band the 13th Floor Elevators, spending part of the '70s in a mental hospital, and making a tentative comeback in the '80s. It's a captivating tale, as moving as it is cautionary.

VIDEO GAME -- Dirt: True to its name, this racer (for the Xbox 360 and PlayStation 3) features off-road courses filled with plenty of rocks and mud. Keeping your custom ride on path is just one of the many challenges. It's also the most authentic driving game available: Turns are a bitch, and crashes result in some serious damage to your car. Plus, the online multiplayer lets 100 gamers rally at the same time. Start your engines!

CD -- Social Distortion: Greatest Hits: Orange County rockers Social Distortion have spent the past 25 years bridging the gap between West Coast punk and Johnny Cash-style redemption songs. This 11-track compilation saves the most space for their brief fling with modern-rock radio in the early '90s. Through it all, frontman Mike Ness plays the world's most introspective badass.

DVD -- The Ultimate Underdog DVD Collection Volumes 1-3: Just in time for Disney's live-action movie, 18 episodes from the classic 1960s cartoon make their disc debut. But there's no need to fear: Unlike the big-screen bomb, the animated TV show -- spotlighting the superhero dog as well as shorts featuring shifty characters like Tennessee Tuxedo -- was spiked with zip and wit.

COURTESY FLUSH, PLEASE -- Tenchu Z: The Xbox 360's first stealth-action ninja video game isn't all slash-and-tear. In fact, a lot of it takes place in the shadows, where sneaky warriors wait for the perfect kill. Unfortunately, that's about all that happens in the latest outing of this veteran series: Gamers creep up on enemies, slice their throats, and repeat. Swordplay at its most dull.