From a local bench to Divorce Court, Lynn Toler has appeal. 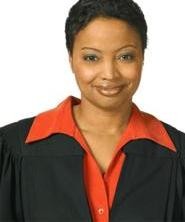 Judge Lynn Toler emerged from her chambers looking as stern as a police interrogator. From the bench, she locked eyes with the ponytailed plaintiff, who was suing her wedding facility for botching the event.

"You listen here," Toler said, her eyes flashing. "You said your wedding was ruined, but the only way your wedding could truly be ruined is if your man don't show."

The audience tittered. The plaintiff's attorney looked as if he wanted to object.

In a softer voice, Toler told the woman that she'd get some money back, but not the whole cost. Too many people expect perfection, she said.

With that, the judge banged her gavel and headed to her private dressing room on the Fox lot.

It's been five years since Toler, the star of the short-lived court-TV show Power of Attorney, saw screen time. But this fall, the former Cleveland Heights judge will return to TV as the leading lady on Fox's Divorce Court.

Toler's transition from municipal court judge to TV star still surprises her. Like most big events in her life, it happened by accident.

In 1993, the Harvard graduate was a fiery young litigator when the chairman of the Cuyahoga County Republican Party suggested that she run for Cleveland Heights Municipal Court.

Toler thought her odds were slim. Cleveland Heights is a Democratic stronghold, and her opponent was Russell Baron, a distinguished lawyer who'd practiced in the city for 14 years longer than Toler had been alive.

"If I hadn't run against him, I would have voted for him myself," Toler quips.

But Toler did bring some ammo: She was the only African American candidate in a largely black district and had a large war chest, thanks to her wealthy father.

On election day, Toler won by just six votes out of the more than 16,000 cast.

She quickly distinguished herself with her creative sentencing. During seven years on the bench, she offered shorter jail terms for convicts who wrote book reports and made obeying their mothers a condition of probation.

Local TV ate it up. In 1998, Channel 19 aired a special on Toler, following her from the courtroom to her living room. When she showed off her tae kwon do skills by splintering wood with her bare hands, it was clear she was made for the limelight.

Her big break came two years later. The producers of Power of Attorney, a new legal show on Fox, were in need of a judge. They canvassed the country for candidates. Naturally, Channel 19 suggested Toler.

Producers didn't tell Toler what show she was auditioning for, so when they asked her opinion of courtroom shows, she put her foot in her mouth. "I love all of them except Power of Attorney," she said.

Despite the faux pas, producers hired her.

"We tested three people, and my opinion was, we shouldn't even test the other two," says producer Laura Gelles.

Toler got her first taste of stardom when she met her co-stars, O.J. Simpson prosecutors Marcia Clark and Christopher Darden. Toler and Clark became fast friends. "She's the nicest person ever," Toler gushes. But Darden was another story. "Chris is a little mercurial. One moment he can be sweet as a pie, and the next he'll hardly speak to you. I never quite figured him out."

The cases Toler presided over were like The People's Court crossed with Jerry Springer. One mother sued because her daughter refused to pay for haircuts. Another mom refused to house her pregnant daughter unless she dumped her slacker boyfriend.

Toler's verdicts were homespun wisdom dispensed with a cut-the-bull edge. She was as likely to cite her mother's advice as she was a precedent-setting decision -- ironic, in light of the fact that her mother thought the show was trashy.

"She didn't understand how her Harvard-educated daughter could do this to her," Toler recounts. "She had visions of me on the Supreme Court."

In 2001, the show was canceled. But TV judges are a lot like Supreme Court justices: Once appointed, they serve for life. For the next five years, Toler made as much as $60,000 annually, just by auditioning for shows.

"There's so few judges willing to do television work that the ones who do are really valuable," explains Michael Cicconetti, president of the American Judges Association.

The sticking point was hair. In 2005, Ephriam wore a wig on the show, the consequence of a bad relaxant. Fox liked the look so much that it asked her to keep it. But Ephriam wanted cornrows. When Fox said no, Ephriam cried racism. Fox, in turn, declined to renew her contract.

When Toler got the nod as Ephriam's replacement, internet message boards lit up with accusations that she was an Uncle Tom.

"Just because you were replaced by another 'black' person doesn't mean it wasn't racial," one viewer wrote. "It simply means they found someone who was willing to abide by their rules. They found . . . a Condoleezza."

While Toler denies the charge, she seems eager not to fan the furor. "I don't know what experiences Mablean had," she says, choosing her words carefully, "but I know that Fox has been nothing but flexible with my hair."

This season, Toler has a full docket that includes a husband who deserted his eight-months-pregnant wife to audition for American Idol, a couple fighting over their 15-year-old daughter's pregnancy, and several military wives who left husbands stationed overseas.

Although the shows won't begin airing till September, Toler's already viewed as a national expert on parlaying local judgeships into Hollywood stardom. The American Judges Association has invited her to speak about transitioning from the bench to TV.

But for Toler, the biggest change may be to her grocery routine. When Power of Attorney was airing, fans would stop her in the supermarket to ask for autographs or argue over rulings. It would take two hours just to buy a loaf of bread.

"Once the show airs, I guess I'll have to start getting up at the crack of dawn again," she says with a smile. "Not that I'm complaining."