The Pixies are reunited, and it feels so good. 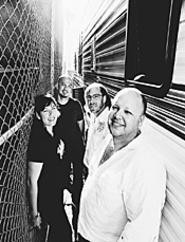 Charles Thompson is infamous for being a grouch. The charismatic Pixies frontman, who shrieked and howled under the name Black Francis before launching a successful solo career as Frank Black, his current moniker, has often been portrayed as being as temperamental as the music he plays.

But on this occasion, Thompson is quickly proving that image wrong -- or at least a little outdated. By 9 a.m. on a day filled with press interviews for the North American tour of the recently reunited Pixies, he's on the morning's third round of questioning, and he's surprisingly laid-back. Down-to-earth. Humble. Even -- dare we say it? -- kind of funny. Life is good for Thompson, and for now, he obviously enjoys just being in the moment as a Pixie.

But the moment isn't what it used to be. Now that guitarist Thompson, bassist Kim Deal, guitarist Joey Santiago, and drummer David Lovering are back in action, the songs are all the same, but the world is different. The music industry has changed since the group got its start in Boston in 1987, and the fans have multiplied by a generation. Demand for Pixies concert tickets is so steep that the band is playing upwards of four nights in some cities. And the Pixies finally gave in and flew to Japan for the first time. It was a brief, two-nights-and-turn-around trip that the Pixies never would've considered before, says Thompson.

"So here I am, older, maybe less arrogant, doing the same thing, you know," he says, launching into a mock-dopey voice. "'Okay, sure, fine, whatever you say -- whatever I have to do to make the money.'"

Timing plays a huge part in the somewhat unlikely reunion of these alt-rock pioneers. (After all, this is the band that suddenly broke up by fax 11 years ago, when Thompson's tensions with Deal, who was struggling with drinking and drugs, were at their peak.) Thompson even admits that if the Pixies had reunited at the five-year mark, it's likely that they wouldn't have been so successful. Now, not only is Generation X feeling nostalgic for songs like "Debaser" and "Monkey Gone to Heaven," but so is Generation Y, even though it missed out on the Pixies' heyday. Keep in mind, these kids were weaned on Nirvana, and Kurt Cobain had gone on the record as one of the Pixies' most famous fans.

"In the United States, the interest in our tour is probably even bigger than it is in Europe. It was the other way around before," Thompson says. "I think things [in Europe] happen a lot faster with pop culture. Because it's taken that long for things to filter out here, and you add in the fact that there are two or three generations of rock kids that have grown up listening to the band -- after the fact, of course -- now they're all coming out to patronize us."

What led up to this was a makeup almost as random as the band's famous breakup. Last summer, a British radio-show host interviewed Thompson and asked the obvious -- and long-deflected -- question about a possible Pixies reunion. "I made a joke with a DJ, and it kind of fanned out from that," says Thompson. "They just decided to turn it into a rumor. They knew that I was being sarcastic, but they decided to overlook that."

Once word got out among indie rock fans around the world, Thompson started to take the notion seriously. "I was on the road, so I don't think that [the other former Pixies] knew how to get ahold of me, so I ended up calling them to say, 'Hey, sorry about this funny thing that ended up in the papers and stuff," he recalls. "I was just kidding around. But anyway, on that note, do you want to take advantage of this moment, and do you want to do it?'"

In April, Minneapolis fans got to see the four play their first show together in 12 years, and in May, the band co-headlined the opening night of the Coachella Valley Music Festival in California. Among the 50,000 spectators who bought out the event, the biggest buzz by far was about the Pixies, who looked happy to be together and sounded as dead-on as any longtime devotee could've hoped for.

"Everyone plays like 10 percent better. Well, we still make plenty of mistakes. But yeah, there's just something about it -- just being a musician for that much longer has made everyone a little more solid. So that's kind of nice," Thompson says.

For now, the Pixies are concentrating on touring, and the only CDs in the works are the limited-edition DiscLive recordings available at each show. Although they haven't ruled out recording another full-length, it's equally possible that they'll release more downloadable singles through iTunes, as they did with "Bam Thwok," their first new work since Trompe le Monde came out in 1991.

"The record business is kind of in a slump right now, so maybe we shouldn't make a record," says Thompson. "It kind of puts the power in the artist's hands a little more, in that you don't need to -- especially if you already have an established career -- you don't need to run around and try to get your record together and find a record label in order to exist. You can just go, 'Hey, there's this movie that's calling up and asking for a song -- Let's do a song.' There's not the pressure to come up with a whole record and finance it and all that."

So the changing times have worked to the Pixies' advantage. Not only that, but the band members have so much more studio experience -- more "rock muscles," as Thompson puts it. "Everyone just kind of plugged in and played," he says. "It was amazing how quickly it all kind of fell together."