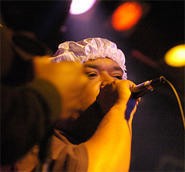 Singer-songwriter Kate Voegele has signed a multi-album deal with MySpace Records, an extension of the internet's most popular music-oriented website. MySpace Records is in a partnership with Interscope, and the deal includes an option for the major label to move the Bay Village native to its roster. Other MySpace artists include sleaze-rapper Mickey Avalon and the emo band Sherwood.

"I've been following Kate's career since she was 16," says Jon Pikus, director of MySpace's A&R division. "When I landed at MySpace Records, she was the first artist I pursued. I had her showcase for [MySpace founder and president] Tom Anderson in our office, with just an acoustic guitar. And she won him over."

Both MySpace and Voegele declined to say exactly how many albums the deal is for. Voegele has recorded an album with Clevelanders Andy Sorenson, Marky Tobik, Patrick O'Donnell, and her father, Will Voegele. Set for an April release, the still-untitled disc was produced by Marshall Altman (Matt Nathanson, Marc Broussard). Pikus says she'll shoot at least one video and a series of behind-the-scenes clips that will be "aggressively" marketed through MySpace and traditional media. The 20-year-old Voegele is a sophomore at Miami University of Ohio. She says the band will tour as much as possible once the album is released.

"MySpace presents an opportunity in a record label that I hadn't see in any other company," she says. "Their approach to marketing and promotion was so innovative and sparked my interest for a lot of reasons."

Playhouse Square is also offering a one-week after-school residence with the Mayhem Poets of New Jersey, held in downtown Cleveland from February 12 to 16. Twenty scholarships are available. High school students 13 to 19 can apply by submitting contact information, their school, and an original poem to director Ray Gargano at garganor@playhousesquare.org. Call 216-348-7912 for more information.

· If you don't like the Eagles and never did, here's another reason to continue: The James Gang reconvened last summer with the intention of writing and recording a new album, but the band's representative says the disc is on hold while frontman Joe Walsh works on the new Eagles album.

· Akron thrashers Hatecore Inc. have posted three new songs at MySpace.com/hatecoreinc. The tracks are from the upcoming follow-up to 2005's This Pure Hatred, tentatively titled Sooner or Later and slated for spring release on Akron's Detained Records. Cole Martinez (Years of Fire, At No End) produced.

· Akron's Black Keys will make two TV appearances this Thursday, January 11: They'll be on MTV2's Subterranean, followed by a performance on Late Night With Conan O'Brien. The band's December 14 feature on NPR's Morning Edition is archived at npr.org.