Did the Old Arcade once harbor a speakeasy? 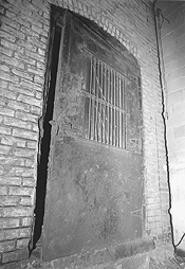 Off Euclid Avenue, past a rusted gate and down a narrow alley paved with centenarian bricks, a battered steel door clings achingly to its hinges. The door swings open to expose an elevator shaft, dark as a throat, with bricks slick from the morning rain and a history just as slippery.

Many years ago, this was a little-known entrance to the soaring, skylit Arcade. It's doubtful, however, that any white-gloved society ladies ventured through this sooty alley on their way to afternoon shopping. The elevator that once occupied this shaft didn't stop on any of the five floors of the Arcade, nor to either of the towers on its flanks. It traveled instead to a hidden two-story space between the Arcade and the Euclid tower.

"You feel like you could get away with something back here," says Arcade project manager Kevin Farrell from the shadows.

Speakeasies were common in Cleveland during Prohibition. From 1920 to 1933, boats filled with fine liquor arrived regularly from Canada. In the winter, it was transported over the frozen lake by car. The Cleveland Press estimated that 30,000 people were peddling liquor here in 1923, supplied by illegal imports and a thousand local stills. An estimated 100,000 residents drank regularly in their homes. Others violated the ban in hidden bars, where they sometimes broke the prostitution laws too.

Speakeasies were so popular that, a year after Prohibition ended, there were still more than a thousand operating in the city. According to The Plain Dealer, the largest area for "speak tours" was located between Carnegie and Lexington avenues and East 55th and 79th streets. A shot of blended whiskey cost a dime. Beer was fifteen cents a quart and mixed drinks no more than a quarter.

The spirits at an Arcade speakeasy would have been pricier. That's because the more exclusive "speaks," well-known to hip cabbies of the day, were located mostly along Euclid Avenue.

If the Arcade did indeed house a speakeasy, it would sully the building's polished history with an intriguing splash of seaminess. Once heralded as Cleveland's Crystal Palace, the Arcade was built in 1890 by local business legends John D. Rockefeller, Charles Brush, Stephen V. Harkness, and the Severance family, among others. An architectural masterpiece designed by John M. Eisenmann and George H. Smith, it has been compared to the Galleria Vittorio Emmanuele in Milan, Italy. The Arcade's five elegant stories are topped with a three-hundred-foot-high iron-and-glass roof.

The building -- proclaimed a national historic landmark in 1975 -- has switched owners only three times. Albert A. List of New York bought it from Rockefeller et al in the 1940s, then sold it to Harvey Oppmann in 1978. Oppmann reportedly denies that his former building once housed a speakeasy, but did not return phone calls.

Historians from both the Western Reserve Historical Society and the Cleveland Police Historical Society Museum could not find any specific evidence of a speakeasy in the Arcade, though they don't discount the possibility. And writer John Stark Bellamy II, a history specialist for the Cuyahoga County Public Library, likes the idea.

"There were speakeasies everywhere," he says of Cleveland in the 1920s. In fact, notorious bootlegger Johnny Joyce used to have an office in the Arcade. Joyce, whom Bellamy describes in his chilling book of Cleveland crime, They Died Crawling, as "dapper to a fault," was charged with (though later acquitted of) murdering car salesman Harold Kagy in 1920. The night Kagy was shot, he and Joyce had accompanied an upstanding judge, William H. McGannon, who was also charged with the crime, to an East Cleveland speakeasy.

The hidden space came as a surprise to Chicago-based LR Development, which bought the Arcade with the Hyatt Corporation and is in the process of converting several floors into a luxury hotel, scheduled to open by spring of 2001. LR Vice President Ted Weldon says his crew found the modest two-floor hideaway gutted and dismantled, with only wallpaper and some beer signs on the wall. It's apparent by the Beck's Beer signage that the first floor was a bar at some point in recent history.

Accessible through the Arcade only by a small, junk-cluttered passageway located deep in the back of a now-vacant store, the windowless bar area is cluttered with plaster and refuse. The elevator shaft has been covered. Only a stairway with a paint-chipped railing leads up to the second floor, which Farrell suspects was used as a storage area -- and to which purpose it will soon return. The bar area will become a kitchen. Farrell himself believes it was a speakeasy and says he looks forward to uncovering more of the Arcade's secrets as it undergoes its $52 million renovation.

Architects working with Jonathan Sandvick, the Arcade's renovation architect, say they have also pondered the speakeasy speculation. A handful of proprietors in neighboring retail spaces had not, but were quick to add that it wouldn't surprise them if it were true.

As one put it, "You expect them to find a few bodies in the walls too."

Jacqueline Marino can be reached at [email protected].