The Play House ends its season on a lofty note. 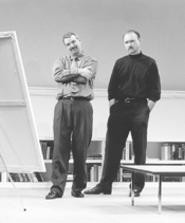 At Corky and Lenny's, Cleveland's kosher haven for theater buffs, devotees of matzo balls and cheesecake gather to sniff out the most viable entertainment prospects.

The buzz emanating over the hot pastrami these days centers around the Cleveland Play House's riveting season closer, Art, by Yasmina Reza, a French actress who also happens to be a nice Jewish girl. Too shrewd to sit around in her beret ingesting fromage and caf´ au lait while waiting for her next role, she dramatized a spat she had with a snooty art-collecting buddy who paid 200,000 francs ($40,000 American) for a painting that bore a striking resemblance to Cream of Wheat sans the bowl. She declared him "fou" (that's French for mad). By turning this real-life situation into a play and substituting a male alter-ego for herself, she created a potent distillation of the egotism that fuels male friendships.

This is a rare play that thrives in every country. It stormed France in 1994 and conquered London in Christopher Hampton's elegant translation in 1996. Since then, it has gone around the international theater world with the intrepid speed of a computer virus, finally landing on the banks of the Cuyahoga, where cutting-edge plays tend to make their appearance "at last" rather than "at once." It is mounted on a glowing nugget of universal truth: that all friendships are predicated on some form of ego gratification. This central perception of human nature is so dazzlingly illustrated that it's impossible for anyone who has ever bonded with another human being not to be fascinated.

Reza's play is ostensibly set among the affluent French working class, but the key to its success is that it has the compact catholicity of a Greek tragedy and is as pure in its comic logic as a Buster Keaton silent comedy. It is imbued with the buffed egos and put-upon dupes of a vintage Jack Benny comic sketch.

Serge (Andrew May), a dermatologist trying to get a foothold in the world of the avant garde, invests a vast amount of money on a painting that resembles a study in whiteout. When he proudly shows off this work to Marc (Murphy Guyer), his horrified ami can't resist belittling him: "You paid 200,000 francs for this shit?" As Serge's mentor and arbiter of taste, Marc feels personally betrayed. Emotional pandemonium ensues. The third part of the triad, Yvan (Mike Hartman), a sad-sack appeaser, finds himself the loser in their manipulative tug-of-war.

Playwright and translator forge language as stylized as the argot of Damon Runyan's Broadway gangsters. Through superbly inter-cut monologues and dialogue, a sly commentary emerges on those who define themselves through taste. "It's a complete mystery to me," says Marc. "Serge buys this painting. It has unsettled me, it has filled me with some indefinable unease."

Serge wonders: "Who are you to legislate? You take pride in not being a man of your time."

Decorated in the tasteful splendor of Bauhaus leather, chrome furniture, and pristine walls, Karen Ten Eyck's set is the epitome of bourgeois intellectualism. The three-member cast coalesces into a symphony of insecurity. May, in a dandyish goatee, smoothly reveals the approval-seeking boy beneath the pompous ass; Guyer is perfectly overprecise and rigid in his perpetual black leather jacket and turtleneck; and Hartman, a road company Henry Fonda, works up geysers of Protestant hysteria.

Back in 1936, Clare Boothe Luce gave us that still potent dissection of the insecurities of Park Avenue females in The Women. Now, 65 years later, an astute French playwright has supplied it with a worthy mate.

With the relentlessly cheery triad of The Sound of Music, The Fantasticks, and Joseph and the Amazing Technicolor Dreamcoat hovering over our summer, threatening to turn our very souls into spun sugar, we give thanks to the Jewish Community Center's Halle Theatre for City of Angels, Cy Coleman and Larry Gelbart's fortifying exercise in musical cynicism. Wizard of Oz-style, it uses a single cast to tell parallel stories simultaneously. We see the moral and artistic decomposition of detective writer Steine as he's chewed up by the '40s Hollywood studio system. His novel, City of Angels, is being turned into a film before our eyes. The joke of the musical is that we keep seeing it altered to fit the demands of a Mephistophelean producer.

Coleman, who is one of Broadway's most adept musical chameleons, weaves a score that uncannily re-creates late-'40s scat, Billie Holiday blues, and fevered film music of the era. Admittedly, the musical frequently threatens to veer out of control as it frantically switches between the two stories. But invariably its originality and sass, expertly punctuated by a sultry, vocally splendid cast, comes to the rescue. Director Rohn Thomas and musical director Larry Hartzell adeptly meld it all together, while Ray Ewers creates a detective who not only bears an uncanny resemblance to the 1940s Burt Lancaster, but is the embodiment of all trench-coat film detectives with the added bonus of song.