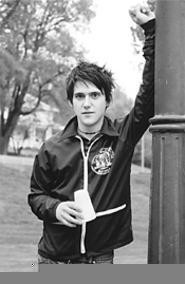 Conor Oberst, the man who is Bright Eyes, does not aim small. Speaking about his most recent album, Lifted, or The Story Is in the Soil, Keep Your Ear to the Ground, he touches on what he considers its overarching theme: "It's sort of about . . . celebrating music and the love I have for my friends, within the context of imminent apocalypse and all this other stuff going on in the world."

This description would be deadly pretentious, if the precocious Oberst -- a 22-year-old college dropout based in unassuming Omaha, Nebraska -- didn't have the intelligence and chops to pull off his ambitions. But Lifted is as deep and -- considered in its best moments -- as vast as such themes deserve.

Take "Bowl of Oranges," the album's sprightly sixth track; its delicately orchestrated folk-pop mirrors the lyrics' immaculately crafted simplicity, so that the occasional, say, Nietzschean sentiment about forging a creative path out of despair catches you off-guard when Oberst's reedy voice throws it at you ("And when crying don't help, you can't compose yourself/It's best to compose a poem"). Later, Oberst sneaks what is probably the most profound use of metaphorical language this side of "I am the egg man" into the song: "But if the world could remain within a frame/Like a painting on a wall/Then I think we'd see the beauty/And we'd stand staring in awe/At our still lives posed/Like a bowl of oranges."

Pretty serious stuff for a guy who, at least until recently, was still living with his parents. But then, Conor Oberst has always been indie rock's gifted child. He cut his first songs on his dad's four-track while he was still in junior high; by age 14, he was fronting Commander Venus and forming Saddle Creek Records with his bandmates. Now, it may be true that thousands upon thousands of adolescent wannabe rock stars get bands together, but Commander Venus toured. And put out two records -- one of which the band did not even have to self-release.

When Commander Venus split up in 1997, Oberst started to record as Bright Eyes (with the help of a rotating cast of characters), dropping four acclaimed full-lengths in as many years. Add to that total two EPs, as well as one warmly received side project in Desaparecidos, whose debut, Read Music/Speak Spanish, came out in February 2002. "Prodigious" hardly does justice.

Perhaps it was only to be expected that, once Oberst reached legal drinking age, he would return to the Bright Eyes mantle after his stint with Desaparecidos and make the best record of his young career. Lifted stands out not only as his most mature work, but also as one of the best albums of last year. As Oberst notes, he's "spent a lot of time writing about, y'know, internal dilemmas, relationships, really personal shit," so much so that he was becoming as notorious for his quasi-confessional balladry as for his melodic, ramshackle sound. And though Lifted is replete with songs about one-night stands, girlfriend nostalgia, family foibles, and artistic self-doubt -- pretty much staples of the Oberst oeuvre -- he's finally crossed the line between self-reflection for its own sake and broader forms of meditation.

"I was aiming for something more universal this time around," he says. "I mean, there's a balance -- I don't think anyone who writes anything can help writing about themselves. But, like, I think this was the first time it really occurred to me that other people would be listening to these songs, and I wanted them to find something there . . . something hopeful?"

That questioning intonation at the end of Oberst's sentence takes on added resonance when he acknowledges that Lifted was very much influenced by the events of September 11. That presence can be felt directly, in lyrics such as "It's a shocking bit of footage/Viewed from a shitty TV screen," from "Method Acting," a song driven by a martial beat that ends in a series of tortured yelps (a vocal method Oberst has all but perfected, if not patented). But it can be felt elsewhere, too.

"Well, for me, the whole album is marked by this . . . feeling," he adds. "Like, shit, life is short, you've got to make the most of it. God, that sounds trite -- it's just, I think that like everyone else in the country, I felt completely changed when it happened. It changed my perspective, and that's not something you forget . . .," Oberst trails off. "Oh, fuck, you know, for some reason I can write songs, but I can't ever fucking articulate myself when I have to talk about them. Can we talk about drums or something?"

Okeydoke. Drums. Which is a worthwhile topic in any case, because the other seven-league step Oberst has taken with Lifted lives in its arrangements, notably in its rhythmic and percussive elements. "Don't Know When but a Day Is Gonna Come" rolls along like a tumbleweed, Oberst's voice quaking into a void, until the pounding of five separate drum kits cues the charge toward the track's apocalyptic finish. "Lover I Don't Have to Love" is up to something entirely different: At once snarling and bouncy, its repetition of melodic elements -- a keyboard hook played like a loop, for example -- creates a throbbing midlevel rhythm over the beats, as often happens with hip-hop tracks.

Though "Lover" is a far cry, stylistically, from the sprawling, album-closing "Let's Not Shit Ourselves (To Love and to Be Loved)," both reveal Lifted's painstaking detail. The everything-but-the-kitchen-sink sound of "Let's Not Shit Ourselves" was, Oberst says, the result of careful paring down from an everything-plus-the-kitchen-sink jam. It's a fitting end to a record that, as he asserts, is meant to celebrate the pleasures of "hanging out with friends and making music," since it came out of doing just that, with tape rolling.

And for the first time, Oberst is taking those friends along with him on the road. Not all of the 30-odd people -- marching band, drunken choir, horn sections, and string quartets -- who helped make Lifted will be along for the ride, but there's enough personnel from each department to be able to re-create the songs as they exist on the record -- something Oberst has never before had the luxury to do. His mini-tour last summer, for example, saw him onstage in a blue tux, with a spartan band of two backup vocalists.

"I've always liked the idea of changing the songs around, making them different for a live show," he says. "But I have to say, one thing I've never been able to do -- which most other bands do automatically -- is to just play the record. I mean, play the songs like how they sound on the record, except it's live." He sighs. "Aw, fuck, I mean, when am I ever going to have five drummers up onstage with me again? For once, I get to play the songs the way I want them to sound." As his teachers might have said, Conor is finally working up to his potential.