His record company dead, Pitbull can focus on his career 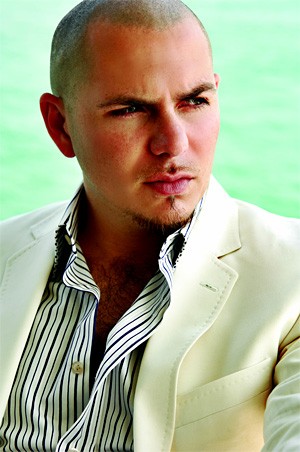 Cuban American rapper Pitbull made his first appearance on the celebrity-news website TMZ.com recently. And it was for the worst possible reason: He was hit in the head with a bottle while performing at a San Antonio club. He left the stage almost immediately, but returned with a blood-soaked towel held to his noggin, challenging his assailant to come up for round two. When nobody materialized, Pitbull did one more song and left to get his head stapled together.

"I guess somebody had a little too much to drink, slung a bottle onstage, and it happened to hit me in the head," recalls the genial rapper. "It was mostly women [at the show], so I think it was somebody's boyfriend just acting out. It's always gonna happen when you got a lot of people drinking. There's always one dummy."

That incident now seems like it might just be the beginning of a turbulent period in Pitbull's career. He is currently out on the road with fellow hip-hopper Baby Bash, supporting last year's The Boatlift. But he's not getting any help from his label — for the simple reason that he doesn't really have much of one anymore. TVT Records — former home to Pitbull, the Ying Yang Twins, and Lil Jon, among others — fired nearly its entire staff a month ago and has now filed for bankruptcy. "I haven't had support from TVT in God knows how long," he says.

You have to wonder whether Pitbull is having a good laugh over the company's predicament. TVT rarely allowed its artists to appear on other labels' records. And in hip-hop, guest spots and mixtapes are just as important as proper albums, if not more so. Pitbull has been quite outspoken in the past about the disputes he's had with TVT over this narrow-minded policy.

"They never held me back, as far as what I wanted to do creatively," he says. "But when it came to getting me a feature, it was always a problem. So now, if I get the chance to deal with somebody independently, I'm gonna be able to. What you're gonna see from the next Pitbull project is gonna be phenomenal."

Let's hope so. So far, Pitbull has released three strong but conceptually tenuous albums. His debut, 2004's M.I.A.M.I. (Money Is a Major Issue), defined him as a Lil Jon protégé with better rhyming skills than most of his crunk and reggaeton peers. By 2006's El Mariel, he had grown as a lyricist, offering clever takes on familiar gangsta/hustler tale-telling and the sex raps that got him noticed in the first place, with singles like "Culo" (for you monolinguals, that's Spanish for "ass").

But on last year's The Boatlift, Pitbull switched gears, making an album filled mostly with strip-club-friendly — when not explicitly strip-club-themed — tracks. And while there are still moments of lyrical bite, the CD comes across even more disjointed than its two predecessors.

Pitbull realizes this. He doesn't apologize for his records, but he's got an explanation for them. "The thing is, I've never had the chance to sit down and really work on an album," he says. "I feel like none of my albums are what I really wanted to do. Dealing with TVT, it's always been a hustle, it's always been a grind. When I do get the chance to bring the producers in — put all the ideas I have on the table — it's gonna be better put together."

In the meantime, Pitbull has got a career to sustain. Free from TVT's shackles, he's releasing a ton of mixtapes and touring with a band that includes a drummer, a conga player, a keyboardist, and a DJ. "That's pretty much all I need right there," he says. "No backup dancers — just me and the crowd, gettin' loose. I don't bring no girls out. If I do, I'll bring 'em from the crowd to the stage." Hopefully, none of their boyfriends will be there, holding bottles.