His Will Be Done

A father's Inheritance leads a son to financial success -- and personal ruin. 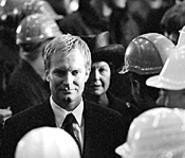 Hey, have you heard about that new Danish film that came out in September? Distributed by Lars von Trier's Zentropa Entertainments, has the same star as one of the Dogme '95 movies, and features a dysfunctional family full of people who yell at each other? Wait . . . don't run away! It's a good movie this time! They use tripods, lights, costumes, sets, music, and an actual script -- honest!

The movie's called The Inheritance, and its star is Ulrich Thomsen, best known to us as the star of the one and only great Dogme film, The Celebration. It begins when a man calling himself Borch Muller (Thomsen) checks himself into a Stockholm hotel, only to learn that the person he's there to see has canceled their meeting. Muller calls his wife, then goes out to the park, where he stares wistfully at the image of a blonde in an upstairs window.

Flash back four years. The man we thought was named Borch is going by the name of Christoffer, and he seems a lot more carefree, mostly because he's a newlywed, married to a stunningly sexy actress named Maria (Lisa Werlinder) who loves to get it on as much as possible, which is good for Christoffer and for us. There are hints of a dark past, though -- Christoffer's father (Ulf Pilgaard) is a dour drinker, and we learn that Christoffer used to work for the family business, until he voluntarily left after suffering a nervous breakdown.

No sooner have we been introduced to Dad than he hangs himself, leaving the fate of his Copenhagen-based steel company up for grabs. As soon as we learn that the name of the company is Borch-Muller, it's pretty clear how things are going to go. Christoffer doesn't want the job -- the logical successor, and the one anointed by his father, is brother-in-law Ulrik (Lars Brygmann) -- but accepts it when he hears that 900 employees are going to be downsized in a future merger, hoping that he can figure out a way to keep them all on board. A compassionate conservative, if you like. Indeed, in this era of muckraking left-wing documentaries, The Inheritance offers a fascinating fictionalized look at what cutthroat capitalism can do to conscience.

Maria's not happy about moving to Copenhagen, since it forces her to give up her long-term acting contract, but she agrees to do it just long enough for Christoffer to steer the merger through. You see where this is going. Christoffer becomes more and more consumed with work, all the while subject to the browbeating and manipulations of his mother (Ghita Norby), who uses the situation to exacerbate old family grudges. Before long, Christoffer's having to fire his friends, suspecting his brother-in-law of conspiring against him, and worrying that when Maria goes back to Stockholm to do a play, she may be cheating on him.

In essence, what we have here is the time-honored theme of a man who metaphorically gains the whole world, but loses his soul. Shakespeare wrote of it many times, and the fact that Maria is a Shakespearean actress could have made for some rather heavy-handed parallels, but director/co-writer Per Fly (The Bench) isn't that obvious. He goes for ironic counterpoint instead; Maria has the female lead in Romeo and Juliet.

Other scenes similarly subvert more banal expectations. Many times we've seen the one where a jealous absentee husband sees a minor incident that leads him to suspect his wife of cheating, upon which she denies it, gets angrily defensive, and that's pretty much the end of things. When Fly gets to that point, we expect no less, but he shows he respects us more than that by giving Christoffer and Maria more than one emotion to play. There's no wrong and no right, and sympathies go back and forth, just as in real relationships. Imagine that!

As for Christoffer's equally inevitable "rock-bottom" scene . . . well, you probably won't expect it to play out the way it does. It's shocking in a way that a Hollywood version wouldn't dare to be. Nobody gets murdered in The Inheritance, but it feels at times like Paul McGuigan's Gangster No. 1 -- not least because lead actor Thomsen has a resemblance to both Paul Bettany and Malcolm McDowell. And now that McGuigan's turned to Hollywood crap with Wicker Park, we need guys like Fly to keep doing their thing.