Catch a Fire's story of an '80s activist resonates today. 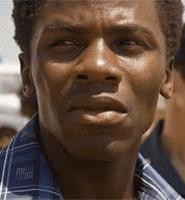 In a scene about halfway through Catch a Fire, freedom fighters -- men and women boasting such nicknames as "Pete My Baby" and "Hot Stuff"-- are being trained at an African National Congress safe house in Mozambique. Their ranks consist of South Africans who've been politicized by cruel life under apartheid rule, where, at any moment, they can be snatched from their homes by the white-controlled Security Branch and beaten for crimes they're only suspected of having committed. In Mozambique, these regular folks -- most of them mothers and fathers who've left their homes without giving their families any warning, lest they too be seized, tortured, and eliminated -- become reluctant soldiers. "Are you ready to die?" barks their commander. He repeats the question, over and over. In unison, finally and forcefully, they all shout, "Yes!"

When I met him last week, Director Phillip Noyce told me that initially, he considered deleting the scene. He fretted that perhaps it would be misinterpreted in "our current context," referring to his concern that audiences would think he was trying to compare the radicalizing of South Africans brutalized by apartheid with suicide bombers' martyring themselves in the cause of religious fundamentalism. As the director pointed out, the South Africans did not want to die -- they didn't strap bombs to themselves and walk into crowded marketplaces -- but they were prepared to. And so the scene was left in.

Yet regardless of its intention or meaning, Catch a Fire can't help but be viewed as a metaphor. A true story about the wrongful imprisonment and prolonged beatings that led to the radicalization of Patrick Chamusso (Derek Luke, bearing the grin that morphs into a growl) in South Africa, it also feels at home in the company of The War Within and Paradise Now, two films from last year that asked the audience not to empathize with terrorists, but to understand a little of what drives them to suicide. Last month at the Toronto International Film Festival, Catch a Fire debuted alongside another film that illuminates modern-day headlines with long-ago and faraway incidents: Mon Colonel, written by Costa-Gavras, is as much about the degradation at Abu Ghraib and the war in Iraq as the French-Algerian conflict at its center.

When first we see him, Patrick Chamusso is a nobody in the middle of nowhere: a foreman at the Secunda oil refinery, which was, in the early 1980s, a symbol of South Africa's prosperity and independence. He has a wife, Precious (Bonnie Henna), and two kids -- and, a few miles away, a mistress, with whom he has another child. He's nothing more than a hard worker and kids' soccer coach, and he has lived his whole life keeping his mouth shut and his head down. He forces his mother-in-law to turn down ANC radio broadcasts, lest someone rat him out to the Security Branch; he defers to white police officers, referring to them as "boss"; he reprimands his own people for using whites-only facilities -- if only to keep the authorities off his own back.

But when the Secunda plant is partially destroyed, Patrick's arrested, detained, and severely beaten by thugs who work for Security Branch Colonel Nic Vos (Tim Robbins), a fictional representation of two officers who nearly killed Chamusso during his nine months in prison. Vos is more monster than man, though Noyce and screenwriter Shawn Slovo (whose parents were two of South Africa's most beloved anti-apartheid activists) try to keep him from slipping into gross caricature. We're meant to see him as a man merely doing his duty and protecting his family, to whom he introduces Patrick during a particularly tense sequence drenched in a thousand coats of subtext. In time the audience comes to view Vos as a stand-in for soldiers who engage in torture at their commanders' demand; he's reprehensible and responsible, but, like Patrick, also a man just carrying out orders and doing his job to care for the family.

In the end, Catch a Fire plays like some weird hybrid on the crazy-quilt filmography of Phillip Noyce, which includes small films made in his native Australia and the Sharon Stone sexcapade Sliver (for which the director's been repenting for years). It crams together the boom-boom political machinations of his Tom Clancy adaptations (Clear and Present Danger, Patriot Games) with the intimate intricacies of his recent return to small-scale stuff (Rabbit-Proof Fence, The Quiet American); the studio's selling it as a firebombing thriller, when it's much, much more. And what it's definitely not is the standard-issue movie about apartheid; there's no white protagonist, no pale-faced hero riding in on his high horse to save the oppressed black man in need of his wisdom and strength. It's the story of Patrick Chamusso, who intended no harm until harm was done to him. Fact is, he could be just about anyone anywhere -- South Africa, the Middle East, or right next door.