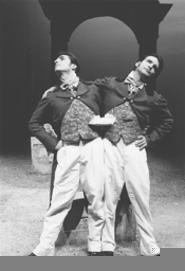 The Cleveland Play House's The Emancipation of Valet de Chambre, personally commissioned and locally produced, reflects glory on all concerned. At times, it's as exhilarating as a winning day at the races, and at other times, it's as dark as one of Ingmar Bergman's plunges into despair.

Artistic Director Peter Hackett has been tenderly incubating playwright/director Murphy Guyer in his reign at the Play House. Guyer, in turn, has periodically hatched for the theater a brood of interesting but flawed black-hearted farces that almost, but not quite, took flight.

Now Guyer has pulled off a dexterous mating with the 90-years-deceased progenitor of Huckleberry Finn, transforming one of his lesser-known works into a theatrical bird of paradise. Mark Twain's Puddn'head Wilson, A Tale (1894) is a salty chronicle of the repercussions that occur when a desperate slave switches her light-skinned baby with the master's. This is a favorite novella of Twain aficionados, but it unfortunately has fallen through the cracks between Huck's Mississippi raft adventure and Tom Sawyer's cave exploits. The reason for this is its schizophrenic nature. The work is equal parts cracker-barrel satire and detective whodunit, mixed with a fiery biblical indictment of the curse of slavery. All this makes for a fascinating, one-of-a-kind hodgepodge.

Guyer's adaptation is one of the few that refuses to Disneyfy one of America's most complicated authors. He captures both sides of Mark Twain/Samuel Clemens, encapsulating the spinner of tall tales of eternal childhood on the Mississippi as well as the fire-breathing misanthrope casting caustic humor to mask savagery and sadness.

In an image out of Greek tragedy, Guyer gives us a glimpse of ultimate betrayal, when an ex-slave mother comes to the realization that her no-account son has put her back into bondage by literally selling her down the river. In this moment, the play takes on the power of a primeval lightning flash, making us spectators to original sin.

Guyer has a flair for harnessing the macabre and grotesque. He sets the story in a Charles Addams-inspired graveyard full of elongated tombstones and whimsical monuments. To propel the action as well as inject Twain's voice and humor into the story, he invents an undertaker narrator, Youth Griffin, played by Ernest Perry Jr. -- an ex-slave who, like a jolly Virgil, has the ability to lead tours through the netherworld of Twain's long-gone sinners.

As director, Guyer is an inspired puppetmaster, who moves his lush marionettes through Twain's labyrinthine plot in a rollicking presentational style. They act as troubadours dressed in antebellum finery, reliving their lives in the graveyard, making their tombs approximate their former residences -- going so far, in a stroke of macabre wit, as to have a sarcophagus serve as a piano. For the audience's edification, they reenact the quixotic follies that plagued their lives.

Dave Wilson, the young lawyer who comes to the pre-Civil War Hadley's Landing, Missouri, is forever labeled "Puddn'head" because of an ill-advised joke: "I wish I owned half that dog, so I could kill my half." As Twain's jester and wise fool, he will ultimately redeem himself by using the newfangled art of fingerprinting to reveal the identity of a murderer.

When Twain first started his novella, he aimed high with his satiric darts by introducing a pair of Italian Siamese twins named Luigi and Angelo Tocci. However, an overly pragmatic publisher separated them into mere identical twins. The play wisely reunites them. Played by Mark Giordano and Matte Osian, joined at the hip, they are referred to as the "compulsory" brothers. Forever posing like lawn ornaments, icy and disdainful of each other -- one emitting a Byronic sneer, playing the angry warrior, the other all languid sighs, forever the enervated poet -- they create a comic tour de force.

As Roxy, the light-skinned ex-slave, buffeted by storms at sea, treacherous offspring, and former masters, Siobhan Juanita Brown acts with the defiant smoky hauteur that Billie Holiday brought to her songs. She whirls through the play's two hours and 50 minutes as a fury of avenging motherhood.

As Thomas Driscoll, Roxy's baby raised to believe himself a master, James Ludwig plays with the white arrogance of a Shakespearean dastard -- yet, when informed of his true status as the son of a slave, we see him transmogrified into a sniveling lethal villain out of Dickens. The ultimate victim, the eponymous Valet de Chambre, brought up as an abused slave and then too late restored to his rightful place, is the tragic heart of Twain's fable about the destructive effects of measuring status through blood. Myk Watford brings to mind an Arabian prince cruelly deprived of his deserved happiness, left to flounder between slave and master. As implied by the title, he is emancipated only by his death -- perhaps the ultimate tragedy of the Twain canon.

As a cracked Southern belle, Suzanna Hay transforms the myth of Southern womanhood into a comic delight.

In a world dictated by shrinking budgets and attention spans, usually only operas and musicals are allowed the luxury of size and splendor allotted to this production. Its scenes are sharp little vignettes that complement the crazy-quilt pattern of Twain's original. Here, human failings are fermented through the Clemens still until they turn into a pungent moonshine. Those of a fanciful disposition may even have a vision of a bemused, aging patriarch in a white suit, whispering congratulations in the playwright's ear.