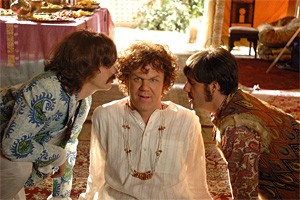 As Dewey Cox — a hard-livin', hard-lovin', hard-everythingin' singer who owes something to every major music figure of the past 50 years — actor John C. Reilly cuts a hilarious and electrifying figure. That is, he does when he's live. On a recent promo tour, which included an appearance at Cleveland's Rock Hall, Reilly slipped into the guise of a surly, self-obsessed spotlight hog, playing selections from his protest-singer phase ("not that I believed in that shit") and congratulating the crowd for its taste: "I've never heard so many men say, 'I love Cox!'" His Dewey was an arrogant bastard — and he was funny as hell.

Sadly, Walk Hard: The Dewey Cox Story isn't. And seeing Reilly perform the material live only proves how misconceived this barrage of dry-docked yacht-rock gags is at every level — starting with its flaccid Cox.

Written by the high-powered team of Judd Apatow (40-Year-Old Virgin, Knocked Up) and Jake Kasdan, and directed by Kasdan, Walk Hard often plays like scene-for-scene nose-thumbing at the Johnny Cash biopic Walk the Line. Only Dewey is less a Man in Black than a twerp in twill, a humble country boy who steps forward at his high-school talent show to croon a mushy ballad — which, of course, induces a riot, prompts cries of "It's the devil's music!" and unleashes an epidemic of teenage lust. It also bum-rushes Dewey down the path to stardom, leading to an affair with duet-partner Darlene (Jenna Fischer) as well as busted marriages, drug addiction, and, at rock bottom, his own '70s variety show.

Had Dewey been the mean, obscene sex machine of Reilly's live shows, Walk Hard might've been a hoot. But Dewey doesn't hang together as a character. He's festooned with ill-fitting traits swiped from a season's worth of Behind the Musics. When the movie isn't sending up something specific — Cash's drug habit, Dylan's protest singing, Brian Wilson's obsessive mania — Reilly has nothing to play. And even when the skewering of bio tropes is spot-on — as in the obligatory conquering-the-charts montage for a single "recorded just 35 minutes ago!" — the timing is off.