"I choose you, Pikachu!" Pokémon comes to life onstage. 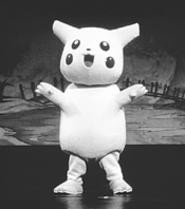 Most parents don't have the faintest idea why their offspring flock to the oddball influx of next-generation toys. These strange idols, with their multimedia blitz of TV shows, movies, games, and figurines, seem to have the wee ones programmed, sending America's youth into the toy aisles as if sustenance were now packaged by Nintendo and Hasbro. But in case your puzzlement hadn't already reached maddening proportions, Pokémon Live! will be in town through October 8 -- a glitzy stage show based on a video popularized by, of all things, a derivative children's card game.

"I was aware there was a thing called Pokémon, but I had no idea what it was about or what Pokémon were," says Dominic Nolfi, who brings main character Ash to life. "I just kind of learned as I went along."

Which means you can, too. Snatch your fledglings from their caches of import toys, drag them to the CSU Convention Center, and while he or she squirms in a seat with elation, you can jab your index finger toward the bizarre stage production and ask, "Now, what the hell is going on?"

If it helps, the plot's main characters -- Pokémon trainers Ash, Misty, and Brock -- are on a journey to find a diamond badge. Such badges are won through violent but fun combat between Pokémon (short for "pocket monsters") that are captured in the wild, raised, and then trained to capture more monsters or the ever-precious badges. "These badges are like Olympic gold medals," explains Nolfi. "They're like a symbol of victory."

Sound easy enough? "They also lose the map on the way there and bicker among themselves," Nolfi says. "Then learn about friendship and a dark secret Ash's mother has."

If you're still confused, don't fret -- others have been there. "The set is huge," Nolfi adds as a ray of hope. "There's a lot of pyros and explosions, and the singing and dancing is top-notch."

And at least it's not the Teletubbies.