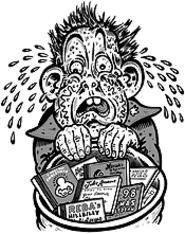 Smell that in the air? It's that frightening time of year creeping up on us and breathing down our necks once again. And, no, we're not talking about Halloween. It's an even more chilling season -- the record companies' annual Christmas CD release schedule. It's never too early to get the product onto shelves -- as a few of this year's early-September releases prove -- and into the hands of fans eager to begin their holiday celebrating. Below is the latest crop of seasonal albums. Some are repeat offenders (Amy Grant), others are first-time violators (98 Degrees). Yet they all have something in common: the ability to scare the hell out of you and drain that Christmas spirit. Happy holidays.

Julie Andrews, Christmas With Julie Andrews (Legacy) -- This reissue of Andrews's only holiday album (from 1982) covers the usual suspects -- "Oh Come All Ye Faithful," "Silent Night" -- with the Broadway and film star's customary class and professionalism.

Trick: The hills are alive with the sound of Christmas, and Andrews is going to make sure you soak in every word, note, and syllable that leaves her mouth.

Treat: Andrews does the traditional stuff well, even if the arrangements and her readings aren't nearly as inspired as one would hope.

Scary Stuff: Andrews, more often than not, soars over the songs as if the bratty von Trapp children's very lives depended on it.

Paul Brandt, A Paul Brandt Christmas: Shall I Play for You? (Reprise) -- Big-hatted country cheeseball Brandt has little soul and even less imagination. But he does have a mighty big hat, which he sports proudly on the cover of this set of old favorites and self-written seasonal tunes.

Trick: Shall I Play for You? sounds like it was recorded during band breaks of Brandt's latest bomb. The songs are lazy, bland, and rushed.

Treat: "Six Tons of Toys," a holiday reworking of Dave Dudley's "Six Days on the Road," is clever and safe (and written by Dudley 30 years ago).

Scary Stuff: Brandt opens his first Christmas album with a cover of "The Little Drummer Boy" that's as disturbing as you'd think it would be. Maybe more so.

Trick: Singing her guts out, almost to the point of popping a vessel or two a few times, Cole instills way too much zest into many of these songs.

Treat: When she does just ease into the light swing arrangements with subtlety and grace, The Magic of Christmas has the potential to be delightful.

Scary Stuff: Cole digs up the bones of her old man again and wrestles with his ghost on a completely pointless version of his holiday classic, "The Christmas Song."

Trick: Engvall feels the need to set up each of the twelve songs with brief commentary.

Treat: Listen to "Here's Your Christmas Sign," clocking in at a harmless two and a half minutes, and you pretty much have the Bill Engvall experience tied up in a neat little package.

Scary Stuff: In addition to handing out his brand of down-home comical Christmas observations, Engvall also gets all misty and serious a few times, recounting the warm and fuzzy joys of homemade gifts and holiday church service.

Amy Grant, A Christmas to Remember (A&M) -- Three Christmas albums on her résumé, and Grant still hasn't run out of material. Yet this one does opt for more obscure songs.

Trick: Grant doesn't have much of a voice, so the few times she attempts to stretch the tunes beyond her facility, she sounds about as comfortable as a snowball on the Fourth of July.

Scary Stuff: The incongruous sacred numbers -- "Highland Cathedral," "Gabriel's Oboe," "Agnus Dei" -- bump awkwardly with the secular tones of "Jingle Bell Rock" and "Mr. Santa." It's almost as if Grant were possessed by some sort of demon pulling her from her Christian roots . . .

Trick: Too much of Joy is spent on those pesky religious numbers ("O Holy Night," "Ave Maria"); Jewel is better suited to her own endearingly clunky material.

Treat: The "Christmas Version" of her hit "Hands," despite being buried beneath a busy and slightly heavy-handed arrangement, is actually sweeter than the original, probably coming closer to Jewel's initial, if perplexing, well-intentioned "message."

Scary Stuff: The playful and sensual "Winter Wonderland" starts out just fine . . . before Jewel begins a yodel-scat combo, bringing it straight into an unsettling blunderland.

Reba McEntire, Secret of Giving: A Christmas Collection (MCA Nashville) -- McEntire's second Christmas album mixes standards and newly penned holiday tunes for a collection that's as cozy and agreeable as a long winter's night in front of a simmering fire.

Trick: Reba puts much more heart into the traditional numbers than she does the new Nashville standards, which lean toward sappy formula. And there are a lot of them.

Treat: The country diva injects new, sexy life into the moldy oldie "Up on the Housetop."

Scary Stuff: The children's choir that backs Reba on the otherwise fine "The Angels Sang" sounds possessed and out to suck the soul of their genial leader. Bloodcurdlingly creepy, in a Village of the Damned kinda way.

Degrees, This Christmas (Universal) -- The first Christmas album from the Backstreet Boys and 'N Sync's latest competition is a predictable mix of holiday faves and robotic contemporary pop with much attention paid to the foursome's tight vocal acrobatics.

Trick: Fans looking for some pelvic-thrusting, blue-eyed soul will be disappointed by the abundance of faithful renditions of seasonal classics like "O Holy Night" and "Little Drummer Boy."

Treat: The album's best song, "This Gift," appears in both "Christmas" and "Pop" versions.

Scary Stuff: For being number three on the current teen heartthrob hot list, these boys certainly sound like very unhip old men when they wrap their pipes around such stolid hymns as "Ave Maria." Distressing, to say the least.

Point of Grace, A Christmas Story (Word/Epic) -- These four Christian women combine traditional holiday spirit with Spectorian splendor, which means they're not above singing odes to St. Nick with really busy arrangements fueling them.

Trick: There may be some sort of concept running through the grooves (it's a huge, ponderous affair that aims to indeed be a Christmas story), but we can't tell you what it would be.

Scary Stuff: The scat-and-horn assault of "Santa Claus Is Comin' to Town" tries hard to grab an Andrews Sisters/boogie-woogie-bugle-boy kinda vibe, but ends up on a detour to an eerie, hellish place you'll never, ever want to visit again.

George Strait, Merry Christmas Wherever You Are (MCA Nashville) -- Strait's as reliable in country circles as, say, line dancing and big-hair gals. He sticks pretty close to holiday perennials on his second seasonal collection, wrapping his smooth, sultry voice around a handful of family favorites.

Trick: Unfortunately, he sounds as if he's sleepwalking through much of the material. And at a skimpy 28 minutes, Merry Christmas Wherever You Are is a boo-worthy lump of coal.

Treat: While he doesn't redefine oft-recorded Christmas classics like "Jingle Bell Rock" and "The Christmas Song," Strait does deliver passable versions of songs everyone knows without adding any of that fancy city stuff.

Scary Stuff: Frankly, Strait sounds a little goofy, not to mention demented, singing "All I Want for Christmas (Is My Two Front Teeth)."

Take 6, We Wish You a Merry Christmas (Reprise) -- This a cappella sextet is perfectly suited to seasonal songs: Their multivocal blend makes them sound like carolers, no matter what type of tune they're crooning.

Trick: The group's admittedly tight, six-part harmonies also make them sound like a supersquare barbershop quartet at times. The doo-wop soul of their musical ancestors is suspiciously absent from these guys. Treat: "Have Yourself a Merry Little Christmas" manages to heartwarmingly summon the holiday spirit.

Scary Stuff: The creepy voices on the opening "We Wish You a Merry Christmas/Carol of the Bells" are hardly inviting; actually, they're more frightening than the noises those poor Blair Witch kids heard in the woods. Terrifying.

Various Artists, Jingle Bell Swing (Columbia/Legacy) -- Gathering jazz-sweetened holiday tunes from the '30s through the '60s, this seemingly blatant cash-in (isn't this neo-swing thing over yet?) benefits from a strong roster, including Miles Davis and Duke Ellington, ably working through some traditional and not-so- traditional favorites.

Trick: The Columbia connection means that forgettable cuts by Pony Poindexter, Russell Malone, and Lambert, Hendricks & Ross find their way into the mix.

Treat: Louis Prima's jumpin' "What Will Santa Claus Say When He Finds Everybody Swinging?" is one of the Fat Man's greatest appearances in song.

Scary Stuff: Art Carney -- The Honeymooners' sewer-scouring Ed Norton -- swings his way through a Beat-inspired reading of "'Twas the Night Before Christmas" that definitely will not tickle your funny bone.