Fine diners can resort to better options than CK's at Quail Hollow. 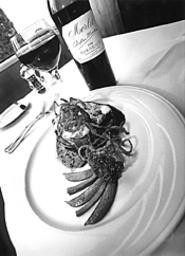 Fine-dining spots like Sans Souci, at the downtown Renaissance Cleveland Hotel, don't just spring up overnight. Foresight, skill, time, and exceptional devotion are required to make such places happen. So we certainly didn't expect to find La Petite Sans Souci in Painesville, at the newly renovated Renaissance Quail Hollow Resort. But was it too much to hope that the resort's new CK's Steakhouse would have polish and pizzazz? In a word, yes.

Considering that the resort recently completed a $15 million renovation that included scrapping the old Quail Wagon Restaurant in favor of the upscale steakhouse concept, we have to conclude that the dining room's unimaginative design and appointments are intentional. Other than a distant view of the golf course through a row of formally dressed windows, the boxy space lacks much in the way of sizzle. (By contrast, the hotel's grand entrance, a light-filled, three-story Arts and Crafts-inspired atrium crafted from stone, wood, and leather, is a knockout.) In the dining room, bland cream-colored linens top the tables; upholstered, lattice-backed chairs provide sensible seating. Sturdy Lucite salt and pepper cellars stand in for flowers or candles. Flatware is substantial but unmemorable; dinnerware is the ubiquitous off-white stuff, with the swirled rim, that shows up in banquet halls across the country. The next-door lounge (a considerably more lively spot, with light woodwork and a piney, outdoors theme) has occasional live entertainment. This is a good thing, since the restaurant's own recorded music is annoyingly banal. In all, this is a room more conducive to the conduct of business than to the celebration of fine food and drink.

On the other hand, we found service -- from the hostess on down to the roving band of attendants who kept our table neat and tidy -- to be friendly and as efficient as circumstances would allow. Our own server, a weary professional who gave the impression of having seen it all, was a model of good-natured stoicism, hardly flinching when forced to explain that the kitchen staffers had lost the green-onion coulis that was supposed to accompany our pan-seared sea scallops. Nor was she flustered when three sequential attempts resulted in consistently cold cappuccino. "Come back again," she smiled, after taking it off our bill. "Maybe it'll be hot then."

In between the coulis-free scallops and the cool cappuccino was a world of hits, misses, and culinary inconsistencies. Executive chef Jerry Peters's menu is pretty much standard issue for today's tony steakhouse, with seven different cuts of beef, a large selection of fish and seafood, and à la carte potato and green-vegetable side dishes sized large enough to share. A napkin-wrapped assortment of Orlando breads and a host of fat little butter balls arrive at the table promptly; a mundane house salad is included in the price of all entrées. One evening's housemade balsamic vinaigrette was sharp enough to make a cringing companion wonder if the kitchen had lost the olive oil, too; on a second evening, the dressing was well-balanced and mellow. However, that was also the evening when the salad obviously had been plated in advance and then stored in the cooler: The greens were limp, and the pale tomato wedge was downright icy.

At the minimum, diners have a right to expect a perfect steak from a restaurant that calls itself a steakhouse, especially when prices hover in the $22 to $32 range. But our 12-ounce New York strip steak, ordered rare, was cooked to a sawdusty medium. (We made out better with a large bacon-wrapped tenderloin, topped with melting Gorgonzola, which arrived properly done to a buttery medium rare.) In light of the kitchen's difficulty with a relatively forgiving slab of beef, it was with more than a little trepidation that we ordered several fish and seafood dishes. Here, however, we got some pleasant surprises. An entrée of pan-seared sea bass, poised upon three braised spears of endive and gently stroked with a bit of delicate, morel-studded cream sauce, turned out to be perfectly cooked, with a sophisticated mix of tastes and textures. A large sautéed crab cake, a flavorful blend of lump crabmeat, cilantro, garlic, and red and yellow pepper, was crisp, crunchy, and luscious. Even without the green-onion coulis, those three prosciutto-wrapped, pan-seared scallops proved to be delicious. And the four big bruisers in a classic shrimp cocktail showed themselves to be the pride of the ocean. In fact, the only example of cruelty to seafood came atop an ample portion of angel hair pasta tossed in a rich lobster cream sauce: Despite its handsome appearance, a large shelled lobster claw that crowned the dish was so overcooked, it was inedible.

As befitting the steakhouse theme, garnishes are simple, and presentation is generally straightforward. Steaks came topped with a tangle of crisp little onion rings; several seafood dishes were finished with a sprinkle of battered and fried leeks. The spicy rémoulade that accompanied the crab cake was richly hot and creamy. But the salty bordelaise sauce that sided our steaks tasted a lot like canned mushroom gravy, and steak fries that looked appealingly golden turned out to be mealy and dry. Since potatoes and vegetables are à la carte items, the kitchen fills the empty spot on the plate with a few spoonfuls of broccoli florets, carrot sticks, and sugar snap peas; on one visit, the veggies were tired and flaccid, and on the next, they were tasty and tender-crisp.

CK's bartender turns out an effective martini and a generous pour of wine. Indeed, the wine list is a high point, with about 125 bottles of domestic and European products, including pricey splurges like a 1997 Far Niente Cab ($140) and a 1992 Chateau Lafite Rothschild Bordeaux ($325). However, wine lovers of more modest means are not neglected. Plenty of drinkable selections are tagged at under $40 a bottle, and a small by-the-glass list runs mostly in the $6 to $8 range.

Desserts, however, are a disappointing allotment of mostly boring offerings (think peanut butter pie and multilayered carrot cake), made off-premises. The most interesting was a classic pear tart, with a shortbread-style crust. If only the crust hadn't been slightly soggy, the pretty dessert would have been worth the calories.

The diners at CK's Steakhouse are a neatly dressed collection of golfers, business travelers, and locals, all brought together by the promise of a good meal at a restaurant that would like to be known as more than just an amenity for the resort guests. Certainly, the beautifully landscaped grounds, home to two championship 18-hole golf courses, are enticing and should be a draw for fine-dining aficionados. That being the case, one can only wonder why those in charge have chosen to proceed so conventionally, with often unimpressive food served in a space almost entirely lacking in sex appeal. "Throw out the Muzak, guys, and put on some jazz," we want to yell. Ditch the dull dishes and grab some colorful plates and bowls. Hire a pastry chef, for crying out loud. Then help the kitchen staffers review their basic skills -- say, how to broil a steak and where to find the coulis -- and you just might get back in the game.