How did an elusive Brit become a garage-rock cult figure? Hell if she knows. 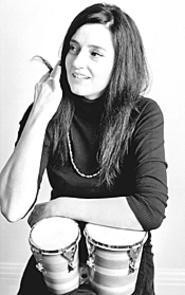 "I might have to go all of a sudden," Holly Golightly says by way of introduction. "I've got food in the oven."

Golightly has cooked from a musical perspective since at least 1991, when she made her first impact on the global garage-rock scene. Still, it's difficult to reconcile the black-clad-boho look she affects on the cover of Truly She Is None Other, the latest in her series of first-rate solo recordings, with the picture of domestic tranquillity she paints from her home in England. "I'm making chicken," she notes in a working-class Sussex accent. "I've done it with honey and lemon and garlic. And I'm also making potatoes and a spinach salad."

Then again, the simplicity of this meal seems perfectly in tune with Golightly's personality, which remains thoroughly uncomplicated despite the hype that's come her way of late. The White Stripes' Jack White has emerged as her most energetic patron; he put her at the center of "It's True That We Love One Another," which concludes the Stripes' platinum-selling CD Elephant, and penned a gushy appreciation for Truly's liner notes. ("Miss Holly Golightly comes to my house sometimes on Sunday, beautiful as the wind that blew her in," he writes.) Nonetheless, Golightly appears not to have noticed any uptick in the amount of attention being paid her as a result of White's boosterism. While she's gotten more bookings than usual lately in her home country and elsewhere in Europe, she hasn't seen "a massive amount of change. I put on shows and people come and dance, so I suppose it must be going all right."

These comments are typical of Golightly's concise conversational style. She prefers Hemingwayesque declarations to rambling narratives, and is rather stingy with biographical information, as White points out in "It's True That We Love One Another." After she sings "I love Jack White like a little brother," he counters with, "Well, Holly, I love you, too. But there's just so much that I don't know about you." She's even coy about her legal identity: "Holly" and "Golightly" are her given first and middle names, she says; her mother was reading the Truman Capote novel Breakfast at Tiffany's during her pregnancy and fell in love with the like-monikered protagonist, portrayed in the 1961 film version by Audrey Hepburn. But Golightly keeps her last name to herself. "There's absolutely no mystery about a lot of people," she allows. "I wouldn't know what it would be like if people knew everything about me. I'm not sure I would like it very much."

After a bit of prodding, though, Golightly provides a few snippets about her background. A London native, she was essentially raised as an only child -- she has two half-brothers much younger than she is -- and grew up listening to a mix of pop and rock. (Her mother liked the Beach Boys and the Pointer Sisters; her dad preferred the Rolling Stones.) Early on, she learned the basics of guitar and piano, but initially was more interested in watching others perform than in doing so herself. She regularly attended gigs by underground garage-rock acts that never got within shooting distance of the commercial mainstream, and her favorite combo was the Milkshakes, which featured drummer Bruce Brand -- who became her main squeeze -- and starred vocalist Billy Childish.

A writer, painter, and published poet as well as a musician, Childish has been characterized by some observers as Golightly's Svengali. Over time, the hyperprolific Childish has led or worked with a dizzying array of musical acts. In the '80s, he decided to pair one such ensemble, dubbed Thee Mighty Caesars, with an all-female outfit he called the Delmonas; shortly thereafter, in typically restless fashion, he rechristened the former group Thee Headcoats and the latter Thee Headcoatees. At one Headcoatees performance, Golightly went from being an audience member to a bandmate in a matter of moments, starting her on a road she'd never thought of taking.

Thee Headcoatees made their recorded debut with 1991's Girlsville and followed up with several more platters made for indie imprints -- Vinyl Japan and Sympathy for the Record Industry among them. Along the way, Golightly began coming up with her own material.

Several of the ditties Golightly conceived were issued as singles prior to the arrival of her solo bow, 1995's accurately titled The Good Things. As one would expect from a Headcoatees alum, the album is unpolished, spare, and willfully primitive, but it's seldom as wild and hysterical as most discs to emerge from the Childish universe. Subsequent solo efforts, such as 1998's Serial Girlfriend and 2000's God Don't Like It, aren't interchangeable clones, but neither are they extremely dissimilar. Golightly offers no apologies for her consistency, unlike those performers who fear they'll sound dated if they don't make concessions to current styles.

The prospect of being tagged as retro in retaliation for this attitude doesn't bother her in the slightest. "If that's what people want to call it, that's fine; I don't care. I suppose people think, 'Oh, yeah, she does sort of old rock-and-roll songs and some of her own songs.' And that's pretty accurate, as far as I'm concerned."

It is, in the case of Truly. With assistance from longtime collaborator Brand and associates such as guitarist-double-bassist Sir Bald Diddley, Golightly contributes nine originals that drip with wit and charm. "Walk a Mile" juxtaposes an insouciant lope of a melody with the lyrical lament "You think I got it easy?/Try being me." Later, "Without You Here" turns Golightly into a one-woman girl group; "One Neck" offers up rockabilly of the creepiest sort; and the ultracatchy "You Have Yet to Win" sets up shop at the intersection of Sassiness and Irony.

"I'm quite happy with what I'm doing -- or else I wouldn't be doing it," she adds. And then she sits down to eat.