Clichés collide at Mom's Diner, but who cares when the food is this good? 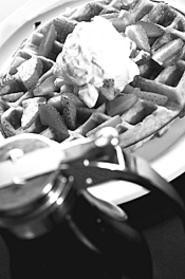 For many years, diners were where Middle America ate, on those rare occasions when Middle America wasn't pulled up to her own family table, where she firmly believed she belonged.

Not that diner food -- the cheap, fast-food alternative of its day -- was necessarily any great shakes. But it was inexpensive, casual enough for working men and women, and a novel departure from the task of preparing a similar meal at home.

By the 1960s, though, small diners were all but swept away by Ray Kroc's brainstorm as well as by the nation's growing mobility and affluence. But Boomers are a nostalgic lot. In recent years, diners have enjoyed something of a revival, popping up throughout the region as either small, casual eateries (typically with a dining counter) or as silvery replicas of old-fashioned railroad dining cars.

So when we heard that restaurateur Brad Friedlander, co-creator and owner of Beachwood's extremely cool Moxie, was opening a casual eatery called Mom's Diner, we initially entertained visions of those too-cute retro models, all done up in aqua paint, stainless steel, and faux Route 66 signs.

Furthermore, when Friedlander said he intended to employ top-shelf ingredients in Mom's made-from-scratch dishes, we wondered whether he was falling victim to that other modern dining cliché -- "comfort food with a twist." But guess what? Not only is there little that is cutesy-pie retro about Mom's decor (not a speck of pastel paint, for instance, and only the barest touch of neon), but the food is merely honest and wholesome, with scarcely a twist in sight. In fact, Mom's guiding principles seem to be derived from the answer to one central question: What could old-fashioned American diner food be like, prepared by talented chefs, using first-rate ingredients?

From a consumer's point of view, at least, the short answer is "Pretty damn good!" At breakfast, that might mean a substantial portion of almost greaseless corned-beef hash, topped with two trembling poached eggs, fresh as the dickens. At lunch, there may be a thick, juicy burger or a BLT built from all-natural bacon tweaked with housemade mayonnaise. And at dinner, Certified Natural Angus Beef meatloaf -- savory and well-seasoned with traditional spices -- sided by a big dollop of buttery mashed potatoes and real gravy, could certainly fill the bill.

The hands behind the homey dishes belong to Executive Chef Sean McMonagle and Sous Chef Nicole Vondrasek; both are Moxie alumni, where they served under that restaurant's talented top toque, Jonathan Bennett. McMonagle and Vondrasek have convinced us that even the most simple foods can be elevated by meticulous preparation and impeccable ingredients. At Mom's, that principle translates into mac and cheese with a satiny sauce of American and cheddar cheeses and elbow macaroni that is still firm to the tooth; glazed carrots that melt in the mouth like caramels; and fresh, grassy green beans that marinate all day in butter, onions, and their natural juices before being heated to order. Bare-bones head-lettuce salad is elevated to kitchen-table perfection with delicate homemade croutons and savory dressings that your mom -- or her mom -- would have been delighted to claim as her own.

Besides the expected lunchtime sandwiches, salads, burgers, and chili, the big menu includes a handful of dinners that range from meatloaf, roasted turkey breast, and beef brisket to a seared rib-eye steak and organic salmon recently removed from the Bay of Fundy. All the dinners come with the de rigueur squishy white rolls (accompanied by real butter, in plastic tubs), the iceberg salad (dressing on the side), and a choice of two well-prepared sides; best of all, most dinners are tagged at only $10.99. (The salmon and the steak are a little more pricey.)

There is a children's menu with about a dozen options as well as an after-dinner listing of Mom's freshly made pies, cakes, and assorted sweeties, imported from Moxie. Blueberry pie, strawberry crisp, and rice pudding were satisfactory, if not especially memorable. Next time, though, we'll stick to the old-fashioned milkshakes: luxurious blends of homemade vanilla ice cream, Hartzler's creamy whole milk, and a generous squirt of chocolate syrup, malt powder optional.

It only took one bite to understand why Mom's waffle is "famous": It's a golden-brown, Belgian-style beauty, with deep indentations just right for holding scads of melting butter and pools of maple syrup (the imitation stuff comes with, but for less than a buck, you can score a small pitcher of the real thing). Inside its thin, suitably crisp exterior, the interior had the texture of heavy cream -- not undercooked or runny, mind you, but sleek and moist as a well-set custard. Taking the theme of early-morning indulgence just one step further is the crème brûlée French toast. Yes, it qualifies as a revisionist "comfort food with a twist." But with its lush, eggy texture and pure vanilla fragrance, we simply didn't care.

If Mom's decor avoids campy clichés, it still contains plenty of handsome references to the diners of yore. The black, white, and camel color scheme extends from the artfully installed octagonal floor tiles to the slightly domed ceiling washed with recessed lighting. Silvery Art Deco-style pendant lamps illuminate the small L-shaped dining counter. The result is a space that is casual enough for diners in shorts and sandals, yet adult enough for commuters to spread out The Wall Street Journal over a bagel and lox before heading into the office. Nonetheless, there is still a slightly unfinished air about the interior: Walls are mostly bare, and come nighttime, corner tables seem poorly lit and dreary. Here's hoping some halogen pendant lights and a few more pieces of wall art are somewhere in Mom's future.

The attentive service at Mom's is pretty polished, too, particularly by diner standards. While the place typically fills up during weekday lunch and weekend breakfasts, the large team of well-choreographed staffers makes sure that all runs as smoothly as a Cuisinart motor. Tables turn quickly, orders are filled promptly, and management checks in frequently to make sure guests are feeling happy and well fed.

Undoubtedly, they are. Mom should feel proud.