V-Li's brings a dash of the exotic to Canal Fulton. 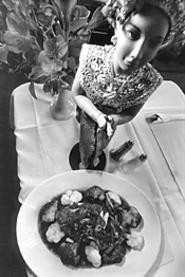 On the coasts, enthusiasm for all things Asian has long since become old hat. Koi ponds? Common as rain puddles. Feng shui? Incorporated into everything from day-care centers to dog kennels. And sushi? It might as well grow on trees. But here in the Rust Belt (where, mind you, we were eating pierogi way before chi-chi chefs in San Francisco and Gotham sniffed them out and tarted them up with mascarpone and truffles), authentic Asian cuisine has been slow to catch on. True, we've had our share of cheap chop-suey palaces, where factory-produced fried noodles grappled for our attention with fluorescent orange balls of sweet-and-sour pork. But unless an enthusiastic eater were willing to venture into Chinatown or had an Asian friend with culinary tendencies, the good stuff -- the real stuff -- was as illusive and mysterious as Buddha's smile.

That this situation has been changing over the past five years should be obvious to the most casual Cleveland gourmand. Good Vietnamese restaurants have been sighted in Parma. Korean barbecue had gained a foothold in Lyndhurst, at least until Arirang Garden closed. And even the Twinsburg Giant Eagle, for cryin' out loud, is selling sushi to go. (I, for one, knew we had turned a gastronomic corner a few years back, when the snacks at my fourth-grader's end-of-school picnic included trays of norimaki, which proved immensely popular among the little girls -- God bless 'em -- although the little boys lingered just long enough to make rude comments before running off to the pizza table.)

All of which brings us to Canal Fulton, a one-traffic-light burg in rural Stark County, where the nearest cosmopolitan retreat is Canton (or, on a bad day, maybe Massillon or Barberton), and warm Saturday nights find the populace strolling the short boardwalk along a remnant of the Ohio Canal. Founded in 1814 and straddling both the towpath trail and the mighty Tuscarawas River, the town is outfitted with a handful of vintage brick buildings, a canoe livery, and a bike rental. The popular St. Helena II canal boat and a tiny canal museum pretty much complete the major points of interest, with a candy shop, two custard stands, a bar, and a teddy bear store thrown in for good measure. It's a town where you might expect to find a little diner serving open-faced turkey sandwiches and wet fries, maybe named "Joe's" or "Mom's," or to stumble across a tiny Victorian tearoom operated by a couple of bored housewives. What you probably would not expect to find is V-Li's, a comfortable little Thai restaurant tucked into the ground floor of a beautifully maintained Italianate building. But what did we tell you? It's a new millennium, and lemongrass is now sprouting in the farmland.

Chef-owner V-Li Van Sickel, along with her husband Roger Van Sickel, opened their dining room in 1997. Although the Thai native had little in the way of professional culinary experience, she was a talented home chef and a devoted diner, with a fondness for the dishes of her homeland. Plus, she notes, she was hungry for constructive activity. Launching a restaurant seemed like the perfect use of her talents and energies, and while she initially feared that pad thai and tod mun would be a hard sell among her adopted homies, patience, perseverance, and a certain amount of compromise paid off: The Van Sickels now preside over a restaurant that routinely wins "people's choice" awards for best Thai food in Northeast Ohio.

Critically speaking, the restaurant's popular appeal is probably as much dependent upon what it isn't as what it is. First and foremost, it isn't the least bit intimidating. In fact, with its lace curtains, wide-board wainscoting, and sponge-painted walls, the tidy little dining room could just as easily be serving burgoo and Brunswick stew as spring rolls and jasmine rice. Oh, there's the collection of pretty celadon porcelains, the elephant-print wallpaper border, and a few pieces of Asian-influenced artwork, but basically, the place is considerably less exotic than your pothead buddy's old dorm room.

Similarly, the menu isn't likely to frighten off potential customers. Other than that pad thai and tod mun, item names are all translated into plain English, and brief written descriptions are accurate and to the point. While well-traveled diners will look in vain for some traditional Thai dishes (hot-and-sour yums, frog legs, or pan-fried squid, say), many of the other standards are present and well handled. There is an excellent chicken satay, for instance, with buttery curry-marinated chicken threaded onto skewers, gently grilled, and served with a smooth, rich, and mildly spiced peanut sauce. There is an outstanding yellow curry, with a bounty of minced potatoes, cauliflower, onion, and bell pepper, in a golden sauce of curry paste and sweet coconut milk. And there is, of course, that fetching pad thai, a sweet-and-smoky dish of lush rice noodles stir-fried with tiny shrimp, chicken slices, and tofu, and garnished with chopped peanuts, bean sprouts, and a slice of lime.

Like their Korean, Chinese, and Indian counterparts, many Thais like their food fiercely hot, dappled with chiles and doused with peppercorns. But sensitive Midwestern palates can proceed without fear at V-Li's: The food is not fiery. While a few dishes are identified as "spicy," even the hottest items we sampled, like the yellow curry, supplied our taste buds with a pleasant nudge rather than a kick. In fact, if pressed, we would say that V-Li's major shortcoming is the food's occasional lack of sizzle. For instance, while the menu described the chicken tod mun (deep-fried, scallion-flecked ground chicken patties) as spicy, we found it bland and one-dimensional. And pity our poor vegetarian companion, who was anticipating a banquet of complexly flavored treats and instead ended up with dishes (fried tofu and a meatless stir-fry) so insipidly seasoned as to be nearly soporific.

But those were the low points. Among the high points were V-Li's homemade soups, full of piquant flavors and heady fragrances. The intense, mahogany-colored Cinnamon Soup, loaded with tender meat, narrow rice noodles, and chopped scallion greens, wafted up great, aromatic clouds of cinnamon and beef. Delicate rice soup sang with essence of cilantro. And chicken-coconut soup, subtly pink and rich as cream, adroitly tap-danced in the spaces between the sweet, the sour, and the savory.

To drink, there is a modest list of wines, priced mostly under $20; a solid selection of beer, including the smooth, hoppy Singha pale lager from Thailand; and the usual collection of soft drinks, teas, and coffee. Thai iced tea and iced coffee are also available; cool and refreshing, but predictably sweet, they are probably best saved for after dinner.

It's also advisable to save room for dessert. While we found the thin, tepid, coconut-studded tapioca to be unmemorable, we adored the Thai-style rice pudding: a sweet snowball of sticky rice slathered with coconut cream and topped with pale yellow petals of palm-sugar custard, finished with a fresh mint leaf. And fried bananas -- thin slices of fruit neatly enveloped in spring roll wrappers and deep-fried to a shattering crispness -- were wonderful, with or without an accompanying scoop of coconut ice cream.

So apparently, there really is something to this Global Village business, and it raises a question: Now that Thai food is flourishing in Canal Fulton, can Doylestown be far behind?