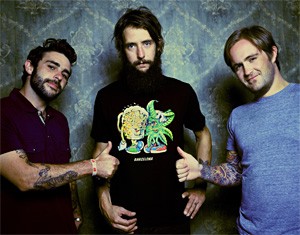 Ben Bridwell, frontman for the indie-rock trio Band of Horses, needed a change. His group's debut, Everything All the Time, came from nowhere to become one of 2006's most lauded albums. Combining jam-band aesthetics, guitar heroics, and occasionally vague lyrics about hopelessness, the album split the minor differences among Neil Young, Built to Spill, and My Morning Jacket.

But Bridwell felt constrained — not only by the CD's plugged-in sound, but also by Seattle, to which he moved from his native South Carolina years before to try life in a music hot spot. His record company, Sub Pop, is based there, and Band of Horses collected its first batch of fans in the Pacific Northwest. But Bridwell was never at home in the City That Never Stops Raining.

So early last year, he packed up his band and moved back to South Carolina. Producer Phil Ek — who worked on Everything All the Time — followed Bridwell, set up shop, and got to work on the group's latest batch of songs. The resulting album, Cease to Begin, which came out in October, is a more stripped-down, laid-back, and relaxed effort — one of the year's best. It's also one that came very naturally, says Bridwell.

"I just wanted to be closer to my family," says the 29-year-old singer-songwriter, an amiable guy who seems a tad uncomfortable with the attention he's received in recent years. "And moving back certainly influenced the record. The first record was so tough and so stressful. I just wanted to have fun with this one."

Looking at Bridwell — tats running up and down his arms, the bottom half of his face covered in a super-shaggy Grizzly Adams beard — you'd never suspect such serene sounds. But Cease to Begin is one of the most gentle, meditative albums to come out in years. From the opening "Is There a Ghost" — which builds to a crescendo of buzzing guitars — to the sinuous "No One's Gonna Love You," the CD eases into its melodies, never forcing riffs, words, or moods.

"I didn't really want to overthink any of it," says Bridwell. "I was thinking, 'Who cares? Let's just record another record.' After the success of the first one, it could've been easy to stay away from the pressures of a new album. But I thought it would be fun to do the opposite — just go with the flow."

Growing up in South Carolina, Bridwell listened to his parents' record collection: Stax's and Motown's vintage soul, the Rolling Stones. Then his older brother turned him on to post-punk groups like R.E.M. Traces of these styles and bands can be heard in Band of Horses' two albums. "I was also into hair metal," he laughs. "I couldn't help but go to Whitesnake shows."

At the top of the decade, Bridwell joined Carissa's Wierd, a Seattle band known mostly for its unwieldy song titles, like "The Part About the Vine That's Growing Through the Window and Reaching Towards My Bed." When frontman Mat Brooke broke up Carissa's, he and Bridwell formed Band of Horses.

The layered guitars and majestic tiers of sound on Everything All the Time reflect the pair's shared influences. But Brooke departed a few months after the album's release, leaving Bridwell as Horse's chief songwriter, lone guitarist, and sole center.

In a way, Cease to Begin is a solo album. Bridwell even refers to it as such. His bandmates — drummer Creighton Barrett and bassist Rob Hampton — play on it, but the voice is singularly Bridwell's. "When I'm writing songs by myself at home, I'm always striving to have some personal time to do that," he says. "I can't really sing or write when there are people around. But as soon as I get alone, I start to think that people are still watching me. There's definitely some paranoia in songs like 'Ghost.'"

The album is often a sad listen, fueled by isolation, desolation, and quite possibly a failed romantic relationship. Bridwell is coy about specific people who may be behind "Window Blues" ("I take it back/I take it all back") and "Ode to LRC" ("I see everyone before me/There was birthday sex and sleep"), but he says there's truth in every song on the album. "There were some darker times in Seattle before I left that influenced some of the more melancholy jammers," he admits. "Sometimes it's me being bummed out and acting like a pussy. Other times, I'm a happy dude. But friends and family are all part of the story."

That means even the lazy lo-fi twang of "Detlef Schrempf" comes from a real place — even if that place has nothing at all to do with the former Seattle SuperSonics forward, from whom it borrows its title. "I like his name, and I like his style," laughs Bridwell. "I'm really bad at naming songs. The song is really about closing some chapters on Seattle."

Bridwell says he and Schrempf have since corresponded by e-mail. A sportswriter friend put them in touch. "He told [Schrempf] we have a song named after him," says Bridwell. "He asked him if he'd ever heard of us, and he said, 'Well, I've heard [Everything All the Time's] "The Funeral,"' which is fucking hilarious."

Bridwell is now leading an expanded six-piece Band of Horses on a tour across the country, and he hopes that the full-group dynamic — which really fills out the new songs onstage — will show up on Horses' future albums. "I finally have the band that I've always wanted," he says. "If anything, I'm gravitating to the way they write and play.

"I thought this last record was really melancholy. I've always wanted to make a rock record. I'd love to sound like the Strokes. But I can't help but write the songs that I write. It might not be very ambitious, but at least it's an honest record."