Neighbors agreed to sell their homes for a shopping center. But the price tag was greater than expected. 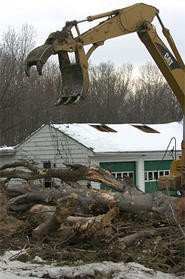 The dead-end street of South Granger in Garfield Heights is one of the last in the neighborhood still fit for human life. The homes have the solid look of hand-me-down furniture. The shrinking forest behind them is still thick enough to imagine it goes forever.

Soon it will be the entryway to a massive shopping center. Behind the tree line is a barren wasteland where entire streets of homes have been destroyed. Now it's starting here. Trees are fed into a towering chipper and spit onto the bed of a semi. One by one, windows are going dark in homes that have been sold. Firefighters and the SWAT team use the abandoned structures for training, smashing windows, axing down doors. Soon a backhoe will knock them down altogether.

Dorothy Ford doesn't know what to do. This is where the 81-year-old wanted to die. Her husband is gone, and she's had a stroke, which makes her unsteady on her feet. But she knows every wall in her sky-blue ranch. A woman only goes to one type of new home at this stage in life.

It was only a matter of time before this happened. Seven years ago, Ford's neighbors looked anxiously across I-480 and saw homes being bought and cleared -- some by eminent domain -- to make way for the sprawling City View shopping center, built on a toxic landfill ["Tomb With a View," January 10]. "We knew they were going to come after us," says Dan Nichols.

So he went door-to-door, getting support from neighbors to sell their land. They'd probably be forced out eventually, he told them. At least if they acted first, they'd get a better price. Most residents agreed. They found a developer, Snider-Cannata of Garfield Heights, who agreed to pay them well. The last hurdle was cleared in 2004, when voters passed a referendum to rezone the neighborhood for a mall. It didn't matter that a handful of neighbors, many of them elderly, had been against it from the start. Progress was on its way. "We wanted to stay here the rest of our lives," says Ford. "I thought we were safe here."

But this isn't her house anymore. Garfield Heights has claimed the homes of those who refused to sell by eminent domain, condemning the neighborhood as "blighted." The official reason: leaking septic systems and streets too narrow.

Ford and the other holdouts can argue their cases next Wednesday before a probate judge. But some don't have the stomach to fight. Maria Roman, also 81, held onto her little brick home as long as she could. Then the Italian immigrant, who lives alone and barely speaks English, heard what sounded like a shootout going on next door. The fire department hadn't bothered to tell her it was conducting training exercises. Roman cowered in her bedroom, crying and afraid. That was when her daughter, Luana Peters, finally took Snider-Cannata's offer.

"She just felt like she had no choice," says Peters. "Now the neighborhood's ruined."

Even Dan Nichols, a retired store owner, doesn't seem so sure he made the right decision. When some of the neighbors tried to close on their option agreements with Snider-Cannata last year, the developer suddenly slashed its offers. Dave Snider tried to drop the price he'd promised Nichols by $30,000, so Nichols walked out of his office. He was finally able to fight Snider back up to the original price, but others weren't as lucky, and are still waiting for the money they were promised. (Snider declined comment.)

Nichols and his wife, Helen, decided to watch as their Rudolph Avenue house -- a little white ranch with light blue trim and window awnings -- was destroyed. They'd built it in 1960, raised their children there. A backhoe tore down the home in 45 minutes. To say they have seller's remorse is an understatement.

"I didn't realize what it did to us," says Nichols. "I almost cry thinking about it."

The couple feel like hotel guests in their new home in Seven Hills. "This is a house. It's not home," Nichols says defiantly. "We don't have a home anymore."

Now Rudolph Avenue is gone. The old-growth trees on this once densely wooded block are a garden of stumps. The carcasses of a few homes sit dying in the mud -- windows shattered and boarded up, siding ripped off, weather stripping blowing like streamers in the bitter wind.

Amid the carnage, a white ranch home still stands dignifiedly. It belongs to the Pastor Hestel Stout of the Church of God on Cleveland's East Side. Stout looks like he's dressed either for services or the grave. His starched white shirt is buttoned up to his Adam's apple. The 74-year-old's body is so frail, he walks in inches and talks without his lips. Sweet-scented candles burn in the warm kitchen. Gospel music hums in the family room.

Stout wanted to sell at first, but Snider-Cannata reneged on its agreement. When Stout went to close last November, Snider-Cannata suddenly cut its $1.2 million offer for his home and the one next to it, both owned by his church, to $800,000. A lawyer for the city claims the developer's first offer was just tentative and that the current offer is still generous. But the pastor refuses to budge. Seeing your neighborhood leveled can make an old guy sentimental.

"This is very much home," he says meekly. "Why do they need another shopping center? We've got one across the street."