Don't bite, even if Bait does. 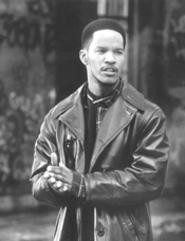 It's unfortunate the title Being John Malkovich has already been taken, as it's a far better one than Bait -- and far more appropriate to boot. As Bristol, a computer expert, wily thief, and cold-blooded killer, Doug Hutchison is the human sampling machine. His is a routine coddled together from the Best of Malkovich DVD, a pastiche of performances lifted from In the Line of Fire, Con Air, and Jennifer 8, among so many others. You know the drill: With shaved head and thick glasses, Hutchison speaks in a soft, docile whisper (the cruel calm of the killer) until that moment of explosion when veins bulge and voice cracks with rage. "You're only alive because I allow it!" he shrieks, and the impression is so dead-on you wonder: a) if it's intentional and b) if Malkovich can sue for copyright infringement.

It's likely the film's three screenwriters (and it's amazing that it takes three men to concoct such unfathomable, unbearable detritus as this) wrote the role with Malkovich in mind -- just as they no doubt wrote Bait with The Conversation and Three Days of the Condor droning in the background. But this is a B movie, and theirs is a B-movie cast: Jamie Foxx in a role once taken by Will Smith (the unsuspecting dupe), David Morse in a part familiar to the filmography of Jon Voight (the bad good guy), and Jamie Kennedy in the Jamie Kennedy role (the government surveillance stooge -- and at what point did Kennedy read the script and say to himself, "I was already in this movie, when it was called Enemy of the State?"). But what makes the film nearly intolerable is that director Antoine Fuqua thinks he's making "art" with a capital F; he's got more gimmicks than Vince McMahon, covering his pothole plot points with so much herky-jerky nonsense that you'll think they filmed Bait during the world's longest earthquake.

The movie's so convoluted and half-assed, it's tempting to dismiss it as unfinished. Its central premise is this, if I can remember correctly three hours after the screening: Bristol and his partner, Jaster (Murphy Brown's Robert Pastorelli), somehow manage to break into the Federal Gold Reserve in Manhattan (how, we have no idea), but Jaster betrays his partner and leaves him at the scene. At the same time, Alvin Sanders (Foxx) and his brother Stevie (Mike Epps) are breaking into a seafood warehouse to score some shrimp -- or prawns, as Alvin keeps insisting, believing one's worth more than the other. Soon enough, Alvin and Jaster wind up in the same jail cell, and Jaster tips off Alvin (sort of) to the whereabouts of the $42 million in gold.

Alvin really knows nothing, but that doesn't bother Treasury Department agent Clenteen, who decides to use Alvin to draw out the real mastermind behind the heist. To do this, Clenteen surgically implants an enormous tracking device in Alvin's jaw (without Alvin's knowledge . . . and without a scar) and sends out false information that Alvin's working for the Treasury Department and has full knowledge of the gold's location, figuring Bristol will hack into the government's computers and "discover" Alvin's file. Clenteen and his people will track Alvin and wait for Bristol to show his face; he will, as Clenteen explains for those too slow or lost to follow, peek out from the dark and take a nibble at the bait.

Because the transmitter is in Alvin's jaw, Clenteen and his surveillance posse (including Kennedy, David Paymer, Megan Dodds, and Nestor Serrano) can hear everything he says. They listen in as he jaws with his brother, smooth-talks his old lady, and nearly gets himself arrested a handful of times. But they function as little more than the film's laugh track: Whenever Alvin says something remotely funny (and it's so remote, the parking's discounted), Fuqua cuts to grinning close-ups of the agents. It's as though they have to remind us this is a comedy, perhaps because Fuqua had no idea what kind of movie he was making: thriller, drama, commercial, or music video (the latter two were his specialty before he made the leap into filmmaking with The Replacement Killers). The film has no rhythm or pacing; it bounces in one scene, then drags in another, until you're exhausted by the uphill-downhill structure.

And the screenwriters (men responsible for such films as Extreme Measures, Mickey Blue Eyes, and North -- all three currently showing at hell's cineplex) have little interest in their main storyline, so they throw in a subplot about Alvin's old lady (Kimberly Elise) and their year-old son, and sub-subplot about two white would-be gangstas (Oz's Kirk Acevedo and Jeffrey Donovan) who blame Alvin and Stevie for getting them busted . . . or something. When the characters finally collide at a racetrack, it's the clumsiest, looniest finale since the end of The Last Boy Scout.

In this Summer of Brotherly Love, when brown means long green at the box office, Bait will no doubt clean up opening weekend -- even if Foxx has no idea what he's doing in it. He is action star in one scene, smirky smartass in another, serious thespian in yet another; he stumbles through Bait like an acting student making a demo reel. But Fuqua offers no assist: In one scene, when Alvin's describing his sad-sack childhood to his woman, Fuqua splices in footage of lighting bolts and racehorses -- a striking, galling moment of melodrama better suited to the Toyota commercials Fuqua used to direct -- and, perhaps, will again.