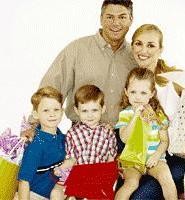 With Cleveland among the finalists for the next Republican National Convention, a look ahead at the high adventure awaiting us when 10,000 guys in cowboy hats come to town:

Terrorist Scare at Tower City
Police cordoned off Tower City for three hours yesterday after reports of a terrorist threat. According to authorities, merchants became alarmed after noticing a large number of shoppers who actually had money. They reported the suspicious activity to police, who detained the customers for questioning.

It was later learned that the shoppers were simply conventioneers from Texas looking for a belt-buckle kiosk.

Hookers Cite Sales Jump
A prostitution trade group is reporting a surge in sales with the arrival of Republican delegates. Richard Armistad, business agent for the Lorain Avenue Brotherhood of Skanks & Crack Whores, Local 216, reported revenue hikes of 84 percent during the first three days of the convention. Armistad said the increase was due largely to a jump in requests for the missionary position, which were up 131 percent over the previous week.

Utah Delegation Has Heart Attack
The entire Utah delegation was pronounced dead last night after suffering a group heart attack. The incident occurred during a private dinner at Sullivan's, an eatery in Lakewood.

Witnesses said all was going well until delegates discovered they were being served by a Catholic. Mary McElroy, the waitress in question, said that's when U.S. Senator Orrin Hatch rose from the table and screamed, "Smite thee, papist!" before attempting to drive a stake through her heart. Hatch apparently died of a massive coronary before he could find his mallet. The rest of the delegation quickly succumbed to coronaries as well.

All were pronounced dead upon arrival at Lakewood Hospital, where their bodies were left out for curbside pickup, since none of the deceased could respond to proof of insurance requests.

Senators Kidnapped
Two Alabama state senators were kidnapped last night from a downtown nightclub. Police say the lawmakers wandered into Peabody's at 11:40 p.m. during a performance of the hardcore punk band Ringworm.

The senators allegedly became boisterous and yelled repeated requests for "Free Bird," the anthem made famous by the popular southern rock troupe Lynyrd Skynyrd. Patrons attempted to subdue the men by buying them liquor, but to no avail. "We bought 'em like six Jäger bombs," says customer Tony Russo, "but they wouldn't shut up."

The senators were then stuffed into the trunk of an Acura and driven to an undisclosed bar in Parma, where they were released. Police identified the perpetrators, but ruled the kidnapping justifiable.

DeLay Arrested
A former House leader was arrested last night by Rocky River police after being caught shoplifting from a women's clothier. According to police, former Texas Congressman Tom DeLay attempted to leave the Dress Barn wearing a tasteful denim jumper that he had not purchased.

When confronted by employees, DeLay, known to colleagues as "The Hammer," attempted to fight his way out of the store. But police say he was pummeled into submission by 76-year-old cashier Olga Jurkovic.

DeLay was held for three hours, but released for "safety reasons," said Detective Hank Ballard. "When you get your ass kicked by a 76-year-old lady, we figured it was too dangerous to keep him in a cell with a middle school kid charged with truancy."

Investment Bankers Riot
After hearing news of a 200-point jump in the Dow, an unruly mob of investment bankers rioted in the Warehouse District last night, breaking Zima bottles and burning their sweater vests. Police say the heaviest clashes occurred outside Motion, an adult-entertainment club, where rioters smashed cell phones and BlackBerrys.

One banker maintained that no harm was intended. "You have to understand," he said. "For us, this is like a win over Michigan."

Police arrested 273 people. Yet prosecutors were forced to release the suspects early this morning after the bankers quickly purchased the county courthouse and converted it to an indoor driving range, leaving no place to hold the arraignments.

More Convention Tragedy
Tragedy struck again at the Republican National Convention when two elderly brothers were beaten to death after apparently being mistaken for homos.

Relatives say Aldo Ciccantelli, 86, had just arrived from Rome to see his ailing brother, Vincenzo, 82. The two had not seen each other in 23 years.

As they embraced outside the downtown Greyhound terminal, they were attacked by a mob of Baptist seminarians from Houston, who beat the two men with large-print versions of the King James Bible.

GOP Won't Be Back
The Republican Convention won't be returning to Cleveland anytime soon. The event has been beset by problems. Organizers have repeatedly caught City Council members stealing food from buffet tables, according to party Chairman Ken Mehlman, "and there are just way too many Negroes. Trent Lott won't even leave his hotel room."

But the biggest problem has been Cleveland's abundance of strip joints, which have siphoned off convention attendance. The final straw came last night, when only 13 people showed up to hear the keynote address by Satan, the party's presidential nominee.