Tuesday, June 3, at the Beachland Tavern. 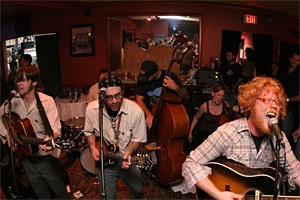 Thanks to their roots in Philadelphia's punk and hard-rock circles, Hoots & Hellmouth's Sean Hoots and Andrew "Hellmouth" Gray bring a raucous edge to old-timey, gospel-tinged string-band music. The band was formed by the pair three years ago and has since been expanded to a trio. The combination of acoustic guitar, mandolin, and upright bass — stomping on the floor typically replaces drums — makes live shows feel like a spirited tent revival, where the consumption of moonshine is not only allowed but encouraged. They're also adept at bringing it down to a delicate, finger-picked sway of back-porch-at-twilight ballads that fall somewhere between Paul Davis and Paul Westerberg. Since the release of their self-titled debut last year, Hoots & Hellmouth have been embraced by the jam-band and folk-fest scenes, tapping into a network that's just as crucial as MySpace to spreading the word about their soulful stomp.