Bullock and Reeves reunite in a twilight-zone romance. 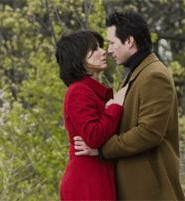 Remember what a fun couple Sandra Bullock and Keanu Reeves were in Speed? Well, forget that. In The Lake House, Warner Bros.' slow and heavy kickoff to the summer-romance season, Bullock and Reeves play the mopiest lovers to hit the big screen since Tony and Maria channeled Romeo and Juliet on the fire escapes of New York City. It's hard to imagine a pair of sacks much sadder than Kate Forster, a physician in a busy Chicago hospital with a distinctively ER rush and bother to it ("I need an MRI stat!"), and Alex Wyler, an architect whose Oedipal struggles with a remote father have led him to confine himself to hack work in condo construction. Both are lonely and unfulfilled. Both own mysteriously similar-looking scrawny mutts. And both have been tenants in a charming lakeside house on stilts not far from the city -- though not at the same time. Which means something more mystical than you think.

Based on the South Korean sci-fi romance Il Mare (2000) and directed by Argentinean filmmaker Alejandro Agresti, who made the inconsequentially charming Valentin and of whom the best that can be said thus far is that he has a poetic way with glum atmosphere, The Lake House may be the most convoluted film ever made about people in glass houses. The house, in this case, is a modernist heap designed by Alex's grumpy old dad (Christopher Plummer), made primarily of wrap-around glass, which makes it also a window into the lost souls of Alex and Kate. The dwelling has seen happier days, but now, as Alex announces morosely, "This house is about ownership, not connection."

In due course, the screenplay, written by playwright David Auburn (Proof), will offer much more than you may want in the way of psychological and existential insight, but for the time being we have a storm of letters to guide us -- at least in theory -- through the byways of this eerie relationship. When Kate vacates the house, she leaves a note for the new tenant, and so begins a correspondence of escalating intimacy.

For a while, it seems that Alex and Kate, baring the true selves they've been hiding from the world, are threatening to buck up a bit. But lo, there's a catch -- Kate is writing from the year 2006, while Alex is marooned in 2004: a predicament that creates all manner of difficulties, not the least of which is the groan and creak of contrivance as the plot strains to bring an epistolary love affair from the twilight zone into the corporeal realm.

The chemistry is a touch lopsided. Without action and special effects to prop him up, Reeves has never been much of a romantic lead. If there's a reason to see The Lake House at all, it's Bullock, who ekes out the quiet suffering of an ordinary woman with an appealing lack of fuss that recalls Jennifer Aniston in The Good Girl or Michelle Pfeiffer in Frankie and Johnny. But Bullock can't hold up this enervating movie, which lumbers along until it takes a giant leap into the suspension of disbelief that lost me altogether. Still, it worked for some. After the screening, clumps of tearful women stood around explaining the ending to those who, like this dry-eyed, obstinately rationalist critic, simply didn't get it. The men rolled their eyes and went for a beer.