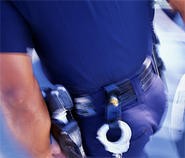 Just before 4 p.m., the afternoon crowd filters into Au Bon Pain to the tune of soothing elevator music. White-coated doctors linger at the pastry display, a hurried mom pumps coffee at the self-serve counter, and ladies with laminated name tags gossip at the lunch tables.

In the back, behind the cashier, two hulking, uniformed police officers huddle around a table. They could be any cops in America, except that this coffee shop happens to sit in the center of the Cleveland Clinic, somewhere between the pharmacy and the gynecologist, and the cops are not your average law-enforcement team.

They're part of a force of roughly 200 police and security guards privately employed by the Clinic. They earn up to $60,000 a year, and their main goal is to help elderly ladies and Arab sheiks feel safe in an East Side neighborhood featuring gas-station bums and abandoned buildings.

It's a sweet gig. Unlike their colleagues at the neighboring Fifth District Police Station, these cops don't have to worry about chasing down drug lords or street gangs. Most of their days are spent unlocking doors, breaking up spats between family members, booting out guys who wander into the hospital to try to bum a smoke. Some days, they're stuck tracking down toilet-paper thieves.

"I would compare them to a suburban police force," says a Clinic employee, who used to make coffee for the cops working third shift. "They're more community service."

But that doesn't mean they don't have power. All of the uniformed guards at the hospital carry guns. Those who trained at the police academy are even allowed to carry semiautomatic weapons while driving the streets. Others, known as security guards, just wield revolvers and patrol the hospital corridors.

While Clinic cops may look like city police, ex-employees of the Clinic tell stories that would make a Law & Order fan cringe. One former guard is remembered for leaving his gunbelt at the children's rehab hospital--overnight. Another was fired after she fell asleep in her patrol car. A third officer somehow neglected to inform his superiors when shots were fired near the Intercontinental Hotel.

"They're good at finding us trouble; that's about it," says one Fifth District cop.

Adds another officer: "They are seriously glorified security guards -- at a very good pay rate."

Recently, a new chief arrived to clean up the ranks. John Kalavsky came to the job with a recommendation from the Ohio Association of Chiefs of Police as well as an inflated sense of mission. In the past year and a half, he fired at least seven people and started lobbying to have the Clinic force accredited by a national law-enforcement group. According to Clinic PR chief Eileen Sheil, he's "done an outstanding job."

But others, including some of the officers whom he fired, find his zero-tolerance attitude a bit hypocritical in light of his own less-than-exemplary past.

A decade ago, Kalavsky was forced to resign his post as police chief in Warrensville Heights, after he was caught using a crime-fighting computer system to dig up dirt on city employees and political opponents of Mayor Raymond Grabow. Kalavsky was eventually indicted for theft in office and forgery, but managed to escape the charges by testifying against Grabow. Soon afterward, several former city council candidates sued Kalavsky and the mayor for violating their civil rights. The suit was later dismissed.

Yet Kalavsky hasn't been so forgiving of his employees' transgressions, holding them to a high standard.

"Chief Kalavsky wanted the Cleveland Clinic to be one of the top 10 police departments in the state of Ohio," says one former security guard. "So he was willing to do anything."

This grand plan was tested last December, when a Clinic cop launched a high-speed chase that ended in a fatal crash.

Around 9:30 p.m. on December 7, a young man jumped into an idling Honda near a deli on Euclid Avenue and raced east down the construction-riddled street.

A Clinic cop spotted the car careening blindly down the street and pursued it for three miles. Speeding past Severance Hall and Case Western Reserve's campus, the caravan hurtled into East Cleveland.

The chase ended near Eddy Road in an explosion of splintered glass and metal. The Honda smashed into a utility pole, a fire hydrant, and a bus-stop sign, sending the driver's body flying like a rag doll into the street.

Such fatal crashes usually bring out the glaring TV cameras and solemn PR speeches, but Chief Kalavsky has remained eerily silent. When contacted by Scene, Kalavsky's secretary referred all questions to Sheil, who refused to grant an interview. In fact, the PR chief never responded to a request for basic information about the police force, including its budget and policies -- information that is required by law of municipal police forces such as the Cleveland Police.

It appears that the esteemed hospital would rather pretend it doesn't have a police department at all. The force is housed in a drab, easy-to-miss building on Euclid; no flashing lights or patriotic color schemes -- just a white lightbulb with tiny black letters that spell "police." To enter, you need to be buzzed in past the locked doors.

But when you press the red button, the disembodied voice offers little help. "We don't give out police reports," she says.

And that's how you know you've come to the right place.