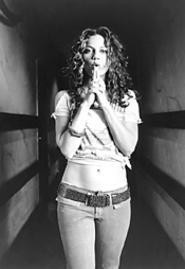 Let's get this out of the way. Bear with us.

We tolerated it at first. Perhaps it deserves mention when a smoldering, 5-foot-1 soul diva with fire-engine-red hair emerges on the scene and coins a brand-new term: "ass cleavage." Most folks who attempt to wear their pants as low as Ms. Costa's find it impossible to function. Many red-blooded gentlemen who observe Ms. Costa in said pants find functioning equally difficult.

Certain slobbering men's magazines (Gear, FHM, et al.) have obsessed about this. Comparisons to plumbers have been made. Har, har.

"I don't really care," Nikka remarks on the phone from her tour bus. "You can get all worked up about it, but at the end of the day, whatever. I think it's funny that it's a topic of conversation at all. It's really funny. Women have been talking about breast cleavage or showing their breast cleavage for years and years, and it's not really hype-worthy. Apparently my ass crack is."

No -- don't. Enough. Take a cold shower and listen to the damn CD. Everybody Got Their Something is her "debut," in a sense, as a rockin,' soulful, streetwise, R&B-obsessed hepcat. It's got all the tools for modern pop radio dominance, but with a more gung-ho attitude. She hoots and hollers like a mini-Aretha ("Push & Pull"). She composes herself for a few prom-worthy romantic moments ("Just Because"). Meanwhile, a smattering of surly rock breakdowns ("Tug of War") make boyfriends feel less guilty and lame for stealing the disc from their girlfriends. Those same moments provide catharsis for the girlfriends upon breaking up with their chump boyfriends ("Hope It Felt Good").

This is Nikka's music. Not to be confused with (or obscured by) Nikka's image, some conceptions of which we find objectionable. For instance:

Young Nikka (born in Tokyo, raised primarily in L.A.) was immediately thrust into a similarly glaring spotlight. She became an international teen rock and roll queen.

This has led to all sorts of "What-did-you-do-during-your-childhood?" moments, including her singing debut (duet with Don Ho, age 5) and perhaps her hipster-cred peak (opened for the Police in Chile in front of 300,000 people, age 10).

"We supported them in Switzerland in front of 80,000 people in a football stadium," Nikka recalls. "In between them and Krokus.

"That was a hard crowd."

AC/DC informed Nikka that she had balls. Yes, balls.

Nikka returned to the States, triumphant, with a record deal from Cheeba Sound (D'Angelo, etc.). This, in turn, produced Everybody Got Their Something.

Now back all the way up. Some people hear about the Sinatra connection and assume Nikka was handed a music career.

Nikka doesn't care what they think.

"It's never been a concern," she says. "Musically, I'm so vastly different from [Don Costa's] stuff, it's only the media that keeps bringing it up -- not even in a comparative way, just a tie-in for a story. [Nonsense!] I think people see that, and I think people don't really care anymore."

Does Nikka remember her past pop life with such venom and anger?

"I think it's a choice you make, as far as how you wanna look at your past," she says. "I don't really feel that regretting my past or being mad that shit went on is good for me right now. I don't think it's good to harbor negative feelings. It's all just how you deal with it. Maybe she had a harder time than me, I don't know."

People hear the word "soul" these days and think the wackiest things. Grammy-endorsed folks like Keys and India.Arie and Nelly Furtado wear the label like a pair of ass-cleavage pants.

Let it be known that Nikka's a bit harder than that.

She sounds like she could open for AC/DC, actually. Parts of Everybody Got Their Something make this abundantly clear. Nikka surfs genres a bit easier than most -- she's in Cleveland as part of the SnoCore Icicle Ball, rockin' out with a troupe of distinctly hip-hop-flavored acts (Blackalicious, Spearhead, etc.).

We'll say one thing: Nikka probably has more magazine fashion spreads than all her SnoCore brethren combined. Most press openly doubles as a chance to display her in a revealing outfit. Add to that her Tommy Hilfiger connection -- Everybody Got Their Something's "Like a Feather" appeared in one of Tommy's most successful ad campaigns -- and you're right back where you started, debating the image vs. music question.

Nikka leaves you to debate it.

"Music is the first and foremost thing. Anybody who listens to my record can see that I don't need to fall back on the whole fashion imagery thing. They're two totally different things -- it's just the way of the world right now. [Fashion and music] are intertwined, and it's all good.

"I love fashion. It doesn't mean I don't play my guitar as much, you know what I mean? It doesn't really interfere. What I wear doesn't interfere with what I do."

Even those pants, perverts.