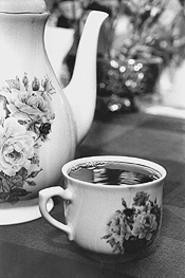 Pity the poor duchess, roaming about her dreary castle in the weary hours between lunch and the evening's repast. Perhaps the aroma of a slow-roasting goose had piqued her appetite. Perhaps the process of pondering royal intrigues had stimulated her taste buds. Or perhaps she was simply cold, tired, and out-of-sorts, and needed something warm and tasty to lift her spirits.

Whatever her motivation, Anna, the Seventh Duchess of Bedford, eventually had enough of the sinking feeling that beset her each afternoon and plucked up her courage to request a tray of tea, bread and butter, and cake. In so doing, the mid-19th-century duchess launched that most feminine of all eating rituals, afternoon tea.

Traditionally, afternoon tea is served around 4 o'clock and includes dainty finger sandwiches, tiny sweets, and most often, scones and thick Devonshire cream. It is not to be confused with the more hearty "high tea" (so called because it was laid out upon the higher dinner table, rather than at a low tea table), which was served around 5 p.m. as a light dinner for the working classes.

While the custom of taking afternoon tea faded as women found, or had thrust upon them, more remunerative pursuits, it never disappeared entirely. Recently, as the popularity of tea as a soothing and potentially healthful beverage has increased, interest in formal tea has seen a resurgence. Here, then, in honor of National Hot Tea Month, is a look at three area spots that offer distinctive versions of afternoon tea.

We swept into the Ritz's sixth-floor parlor with a flourish, feeling like the grandest of dames. The opulent room, with its massively curvaceous pink marble fireplace, crystal chandelier, plush carpeting, and collection of large and ornately framed oil paintings, made us feel like true inheritors of the Duchess of Bedford's teatime legacy. A demure harpist playing dreamily in the corner only added to the sense of class.

Tea choices, from Taylors of Harrogate, included the Ritz's own Blue Sapphire blend as well as Ceylon, Assam, Darjeeling, and Earl Grey. The menu gave a brief description of the origins and flavor notes of each tea, as well as offering a listing of herbal and fruit-flavored infusions for those who so preferred.

My two companions and I ordered basic Afternoon Tea, with tea sandwiches, breads, and scones. The menu also offered a Children's Tea ($9.95), with peanut butter and jelly sandwiches and cocoa, and a very adult Royal Afternoon Tea ($21.50), accompanied by a glass of sherry.

Tea began with an assortment of tiny crustless finger sandwiches. The most voluptuous was made with thin slices of smoked Scottish salmon, ornamented with a smidgen of black caviar and a feather of fresh dill, on whole-wheat bread. Others included slices of crisp cucumber topped with a pouf of cream cheese and the world's tiniest cherry tomato, thick-sliced prosciutto flanked with asparagus tips, and sliced hardboiled egg anchored with pink pimento cheese.

Once we had nibbled our way through the savories, our server appeared with a three-tiered tray of sweets. The bottom layer held that tea essential: cloud-like, currant-studded scones and a pot of sinfully rich Devonshire cream for slathering upon them. Thick slices of walnut and banana-walnut tea breads and a stack of cinnamon-sugar-topped shortbread cookies shared the remainder of the space. On the next layer was a treasure chest of jewel-like, custard-filled fruit tarts, topped with sparkling blueberries, blackberries, strawberries, mandarin oranges, and kiwi slices; dainty glazed Chelsea buns; and miniature cappuccino opera tortes. The top layer gleamed with more of the tiny sweet fruit tarts.

We sipped, we supped, and we chatted our way through the afternoon until we were (almost) embarrassed by the amount of tea we had drunk and how many of the dainties we had polished off. Meanwhile, our discreet and nonjudgmental server kept the tea flowing from our individual pots right up until the moment we reluctantly rose from our seats and headed back out into the real world.

If the Ritz reminded us of a palace, then Olmsted Fall's Clementine's would be a charming little house on the prairie. Nestled among a cluster of historic buildings in a shopping area known as Grand Pacific Junction, Clementine's -- with its mismatched china, plastic "lace" tablecloths, and plank floors -- exuded a homey, unpretentious feel. A second-floor dining room, unfortunately closed on the day we visited, would have afforded a captivating view of the little settlement. But we also enjoyed our seats in a cozy rear "lean-to" on the main floor, with its green-painted, lap-paneled walls, a jumble of Victorian bric-a-brac, and a view of the old railroad station.

My two sophisticated teenage companions and I ordered High Tea, described as finger sandwiches and assorted pastries, but when our tea tray arrived, we were surprised to find lots of childish snacks upon it. We didn't realize what the error was until we received our bill and saw that we had been served, and charged for, one regular tea and two children's teas. While the insipid French bread pizzas and greasy chicken tenders that came with the children's tea were a shock to systems that had savored smoked salmon and caviar just days before, we muddled through. Less forgivable was the fact that scones and Devonshire cream had been left off the tray entirely on the belief, a staffer told me later, that "children won't eat scones." (But what about their mother? I whimpered.)

However, given its informality, Clementine's may be the perfect place to introduce little ones to the joys of afternoon tea. Les bébés can nibble on chicken-salad sandwiches and those chicken tenders and pizza, while Mama and Auntie enjoy more substantial half-sandwiches of roasted red pepper and cream cheese, roast beef with sliced beets, turkey with Monterey Jack cheese and sliced tomato, and assorted veggies and sprouts, with a zippy pesto dressing.

Thick slices of a dry cranberry tea bread, crisp pastry cups filled with vanilla custard and topped with a red grape and a slice of mandarin orange, tiny brownies with dribbles of colored icing, triangles of mint-chocolate cheesecake on a graham cracker crust, and dense but bland raspberry-jam bars completed the teatime assortment.

Beverage selections included a number of regular and decaffeinated black and green teas, herb and flavored infusions, and chai, a blend of tea, milk, and spices. Raw sugar crystals were served in a bowl, but neither milk nor lemon was offered. Our waitress had trouble keeping track of who had ordered which tea and eventually resorted to refilling the pots and letting us decide to whom they should go.

My companion and I had made advance arrangements, as required, to sample Miss Molly's "Affair to Remember," a bountiful banquet of savories and sweets. Hot tea alternatives included Earl Grey, English Breakfast, and Darjeeling in tea bags, and loose-leaf Ceylon tea, as well as several flavored infusions. Sugar cubes and tiny tongs awaited in a dainty porcelain bowl, but neither milk nor lemon was provided.

Our silk-flower-draped, two-tiered serving tray was packed with delicious delights. On the bottom tier were cunning little heart-shaped sandwiches, stuffed with either rich chicken salad, mixed with grapes, almonds, pineapple, and celery, or the even richer Southern Pimento Cheese Spread: a blend of finely shredded cheddar and cream cheeses. Two crisp, custardy mini-quiches and two crunchy Brie-and-phyllo wraps, arranged with red seedless grapes and slices of fresh melon, orange, and kiwi, completed the "nutritious" part of the repast.

Our bemused waiter, looking much like a duck out of water in that ultra-girlie setting, was new and had to be reminded to bring tea strainers so we could remove the leaves as we poured our brew. Still, he returned reliably to refill our pot and did his best to answer questions while we merrily ate and drank our fill.