Hot to the Touch 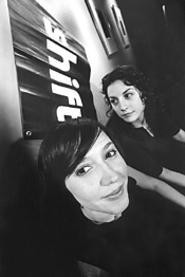 Cleveland is not a city known for its thriving dance music scene. Sure, there are plenty of clubs in the Flats and Warehouse District, where local DJs provide a healthy helping of Top 40 house and trance records. But there are few regular events in town where you can hear producers from around the country pushing the latest in underground techno and house goodness. Shift, a dance party that goes down on the last Saturday of every month at Touch Supper Club in Ohio City, is out to change all that.

At a typical Shift night, the bilevel club is nearly packed. Well-dressed hipsters and familiar faces mingle around the upstairs bar, but the real action is downstairs. Here the space is jammed, and patrons dance wherever they can find room. The turntables and mixer are nestled at the end of the bar, where the countertop meets the dance floor, and techno enthusiasts jockey for standing room in front of the DJ. They're so close, they could reach down and fondle his records themselves. At around midnight, the crowd is just getting warmed up. By 1 a.m., hands are in the air, hips are moving, and butts are bouncing. With each new record the DJ drops, the frenzy builds, and lukewarm calls of appreciation turn into genuine screams of exhilaration. From the faces of the people in the crowd, it's obvious they're all wondering the same thing: "Is this really happening in Cleveland?"

Yes. Thanks to Cleveland residents Kate Catanese and April Rambo, who launched Shift in December 2000 out of a mutual feeling of necessity.

"The whole reason that we started the night in the first place was to give us something to do on a Saturday night where we didn't have to go out of town," Catanese explains. "Primarily, we're bringing in DJs who we want to hear."

Catanese and Rambo had both been blown away by the explosive vibes and communal feeling they experienced at clubs like Rednofive in Chicago. They had even seen a prototype for Shift in Cleveland when Dan Curtin and Steve Cinch booked internationally acclaimed DJs such as Diz, Terence Parker, and Kelli Hand to play at the weekly Thursday-night sessions that Cinch hosted at the Brillo Pad in the late '90s. In Rambo's opinion, those events represented a perfect balance for clubgoers.

During the fall of 2000, Catanese and Rambo approached Doug Berg, owner of Touch Supper Club, and his business partner, Mazi Jahi, who ran the Brillo Pad with Berg until its closing in early 2000, about beginning a monthly party at Touch. Shift soon debuted with a show that coupled local DJ/producer Jeff Samuel and one of Detroit's techno pioneers, Daniel Bell. Since then, most of the engagements have followed this pattern of pairing established DJs such as Tim Harper, John Tejada, and Casey Hogan with local and regional talent like Ian Mariano, Mike Metz, and Chris Pulse.

In the last month, Berg sold Touch to Jeff Allison, a former promoter and manager at clubs like Spy Bar and the Mercury Lounge. Catanese and Rambo are confident that Shift will continue to be slammingly successful. Indeed, even their earliest events generated impressive turnouts. Berg offers this explanation: "I think the people who were going out in the late '80s and early '90s -- it appeals to them, and there isn't much occurring in Cleveland that still appeals to those people."

Shift has an energy that could only come from close audience-artist interaction. This energy has driven performers to new levels -- most notably Harper, who spent at least as much time singing along to the Chicago house records he played as he did mixing them, and Tejada, who used more subtle and intricate turntable techniques to excite the crowd.

"John Tejada surprised everybody," Rambo says. "He had the crowd screaming at him, and as soon as they would calm down and start dancing again, he had them screaming again! He completely interacted with the crowd, but he wasn't singing or dancing around. He's an awesome turntablist, and he used that while playing techno."

Tejada, who will return to DJ a second time at Shift for this month's first anniversary celebration, rightfully gives part of the credit to the club and the crowd.

"You get the intimate kind of place [Touch] is, and the people that really seem to care about the music, and you feel that the people actually get what you're doing," Tejada explains. "All of these places that [Dan Bell and I] play, it's great, but for the most part, it feels like a job. Shift feels more like a party, like you're part of it, instead of just doing your job."

Cleveland DJ Dan Curtin, who has attended almost all of the Shift events, in addition to DJing one, seconds Tejada's affection for the audience.

"It's a very vocal crowd," Curtin says. "That's great for a DJ. When a DJ does something, and the crowd starts screaming and yelling and has their hands in the air, then the DJ knows the crowd likes it. It's the perfect crowd. It's like all kinds of people are in there. It's not just one kind of person."

All of which goes to show that Cleveland does in fact have a scene capable of sustaining a world-class dance music event on a regular basis.

Curtin scoffs at the suggestion that this is a bit ironic, given Cleveland's reputation for passing on anything new in favor of carrying on its grizzled status as rock-and-roll capital of the world.

"Cleveland has always been an excuse for a lot of inadequacies, and that just should not be the case," Curtin says. "Cleveland is a part of this world, like any other city. So I don't think it's ironic. I think it's just normal. I think we should have more of that going on."