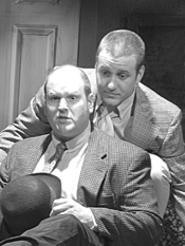 Most of us enjoy conning ourselves into thinking that, as we grow from adolescence into adulthood, we gain security by owning more and more valuable things: a car, a house, all of Usher's CDs. Even President Bush recently deemed the idea of an "ownership society" a splendid goal for all of us. It's a damn good thing we're so busy getting and spending; we can conveniently forget that we all live in rented rooms on borrowed time and that the only things we truly possess are the present moment and our own impermanence.

Almost 40 years ago, Sam Shepard wrote La Turista, a play that takes place in two temporary rooms inhabited by a young, white American couple adrift in the world and beset by difficulties both physical (sunburn, raging dysentery) and cultural. Written a decade before Shepard's better known plays (True West, Buried Child), this script is a hugely self-indulgent and determinedly mysterious collection of symbols and swirling speechifying. But as performed by the ever-courageous Convergence-Continuum group, it never fails to engage, even as it confounds with its oblique approach.

Kent and Salem start out sitting gingerly on their Mexican hotel beds, tending to their sunburned skin and volatile digestive systems, when a local Boy enters, apparently wanting money for a shoeshine. The couple is frightened at the sight of the visitor, but soon the bashful Boy morphs into a cunning young man who -- after spitting in the face of the furious Kent and putting the moves on lithe Salem -- tells of his desire to reunite with his father. While these events could just be hallucinations, those of a political mind-set might conclude that Shepard was making some comments on the Vietnam War (i.e., clueless Americans acting ignorantly in a foreign land).

The Mexico-as-Vietnam allusion is strengthened even more when two violence-prone witch doctors arrive at the hotel room to treat comatose Kent. During their exotic ministrations, which include comically incoherent screaming and the sacrifice of a chicken, their activities are given a play-by-play description by a slickly polished narrator. His emotional disengagement recalls how so many events in other countries -- including the Vietnam war, the Iraq war, the monumental death tolls in Africa, etc. -- are always described so dispassionately by the "tourists" of visiting governmental agencies (e.g., during 'Nam, the term "village pacification" was often used to describe the burning or obliteration of those villages, not to mention bunches of their people).

In the second act, the hotel room changes, Kent's illness switches to sleeping sickness, and the angels of mercy are now a blustery southern Doctor (a puffy and sly Cliff Bailey) and his obedient, oafish son Sonny (played with wide-eyed, unsettling calm by Arthur Grothe). Sonny warns the slowly awakening Kent that his father's prescriptions must be followed, which only serves to drive Kent into more desperate acts of rebellion. Feel free to add your own Vietnam-era analogy here, replacing President Lyndon Johnson with daddy doc.

Now whether playwright Shepard was riffing on America's misadventures in Southeast Asia or just remembering a tortuous weekend of Montezuma's Revenge, his risk-taking play gives the audience's imagination as well as the acting company plenty of room to swing freely. Geoffrey Hoffman literally throws himself from wall to wall and from ceiling to floor as the tormented Kent. After a rather forced beginning, Jovana Batkovic hits her stride as Salem, cozying up with the Mexican, even as she tries to assist her ailing partner. As the Boy, Brin Metzendorf is a lovely amalgam, alternating between clueless and devious, and landing on honest. And his oily narration of the witch-doctor sequence is perfectly pitched. The thankless role of the witch doctor's son (he has one line in English, "Hello," which gets a big laugh) is handled by Brian Breth.

As with all Convergence-Continuum works, the pace never flags, and the surprises pile one atop the next. Director Clyde Simon charges Shepard's passionate language -- and frequently overlong perorations -- with a physical immediacy that commands attention, even as the mind scrambles to catch up. Indeed, almost every square inch of the tiny Liminis theater space is used by Simon's energetic cast, as they leave none of Shepard's symbolic stones unturned.

One of the genuine pleasures of attending theater is being welcomed into a living creative process, being asked to take a leap of faith -- as we do with our magnificently unownable lives -- to encounter moments without predictable plot points and without someone explaining every jot and tittle. Convergence-Continuum devotes itself to such theater, and we're very lucky to have it in our midst.