A glimpse into the art of house legend Little Louie Vega. 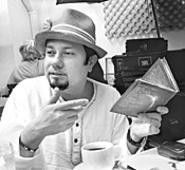 The Bronx is hundreds of miles away from Little Louie Vega's vantage point on the patio behind Miami Beach's Panna Café, where he sits and enjoys a cup of coffee late one morning. He's here under some duress: In three hours, he has to rejoin his wife, the beautiful Cape Verdean vocalist Anané, to pack his bags and fly back with her to New York, where he oversees Masters at Work Productions with longtime partner Kenny "Dope" Gonzalez. Yet he sips his coffee in relaxed and leisurely fashion as he calmly discusses his latest creation, Elements of Life.

"It's a world album with a dance edge to it," summarizes Vega, whose uncle is salsa vocalist Hector Lavoe. A meditation on spirituality, love, and family, Elements of Life encompasses six different languages and incorporates bossa nova, rumba, salsa, soca, and African rhythms. Percussion lies at its center, with session musicians such as keyboardist Albert Menendez and bassist Gene Perez adding flourishes. Its inspiration was a lyric written by Chicago house team Blaze for the title song: "Our dreams are there to show us how to stand for what we know/In the spirit of love, we must let the hatred go." When he first read their words, Vega says, he immediately thought, "Elements of life -- I could build something around that."

Vega's been working on Elements of Life for about three years, gathering collaborators in his native New York as well as Miami and funding the recording sessions himself. "This record cost a lot of money to put together. I could have bought a house," he laughs.

It seems surprising that a high-profile musician like Little Louie Vega would have to finance anything on his own. For the past decade, Masters at Work has dominated the domestic house scene; it's synonymous with modern Nuyorican music. Prolific to a fault, it has remixed "thousands of records," says Vega, including everyone from dance-music veterans (Deee-Lite, Barbara Tucker, and Daft Punk), pop singers (Aaliyah, Gloria Estefan, and Madonna), and world-music stars (Les Negresses Vertes, Femi Kuti, and the Gipsy Kings) to long-forgotten dance divas like Kele Le Roc and Alison Limerick. Gonzalez even scored a minor pop hit -- under the pseudonym the Bucketheads -- with "The Bomb," a 1995 reworking of "Street Player," a long-forgotten disco track by Chicago.

Masters at Work has released 1997's Nuyorican Soul and 2002's Our Time Is Coming on Tommy Boy Records, as well as a classic eponymous debut on Cutting Records back in 1993. In addition to MAW Records, there's Gonzalez's Dopewax label -- serving as an outlet for his frequent forays into sample-heavy disco-house, Latin funk, and hip-hop -- and Vega Records, which released "Cerca De Mi" earlier this year. The duo has also worked on projects for BBE Records, a popular British imprint, adding its star power to compilations filled with rare grooves from the '60s through the '90s. In fact, Masters at Work is so productive that its latest album for Tommy Boy, MAW Electronic, is only mentioned in passing during the conversation.

Now 38, Vega has been making music for more than two decades. Unlike many would-be old-school house heads, he can honestly claim to have attended early hip-hop block parties in the South Bronx and hung out at legendary New York nightclubs like the Fever, Paradise Garage, and the Loft. "I was lucky enough to grow up in the middle of disco, R&B, and rap," he notes, boasting that he has 15,000 to 20,000 records. "Learning a lot from Jazzy Jay, who was one of my mentors, and people like Larry Levan, Jellybean Benitez, Tony Humphries, David Mancuso at the Loft. All these guys taught me all that I know, when it comes to making music." Although Vega smilingly adds that he's "young at heart," he is also newly married, with a son, and reassessing his priorities in life. Moving away from quick-buck remixes, Vega and Gonzalez are focusing on building catalogs for their record labels. "Hopefully, one day we'll get major distribution," he says.

Shifting gears, Vega laughs as he reminisces about how "I got married on the beach" last fall. "Right on the sand. And you know what the weird thing was? It was so cute, because a lot of the locals were here -- a lot of Hispanic people I saw on the beach -- and they were cheering for us. And [a couple] came up to us and said, 'You know what? I don't think people really appreciate the beaches we have. You guys are one of the few [couples] we've seen get married right here on the beach.' And this was a couple who has lived here for many, many years. It was beautiful."

Now Vega is "bicoastal," with residences in both Miami and New York. "I live here now, right next door," he grins, gesturing toward a destination a few blocks beyond the café patio. "I like it a lot." Vega says he has big plans to work with more Miami-based musicians, but today he has to return to New York and the business of being a label owner and producer. He'll be back.