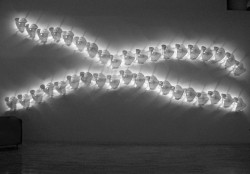 Over the past 20 years, Los Angeles-based artist Jorge Pardo has explored many ways in which art traverses the permeable socio-economic, psychological membrane that divides regular experience from the aesthetic kind. But it's the properties of the membrane itself that really interest him as he plays an extended game of "house" involving, but not limited to, real homes and variably functional furnishings. His survey exhibit, House, traveling here from the Museum of Contemporary Art of North Miami, effortlessly fills the galleries at MOCA Cleveland, offering a hybrid passage among familiar yet altered high-design domestic objects and furnishings. Illuminated by Pardo's overtly lovely, inventive light fixtures, all are transplanted to an institutional dimension with art-historical cachet and museum proscriptions. Places and things are accessible but out of reach - whether physically, conceptually or financially.

House displays 60 works that reprise Pardo's career, showing how he has blurred or erased boundaries among architecture, functional design, sculpture and painting. These are arranged as two- and three-dimensional visual events occurring in a flowing floor plan based on a house the artist built for a collector in Puerto Rico. An "office" area leads past an outdoor, self-enclosed bed derived from an ancient Chinese design to an enormous photo mural of a front garden. Then visitors pass by a kitchen either into a living room or a dining room and along the margins of a bedroom, finally gazing at the open support structure of an unfinished gazebo installed in MOCA's rotunda. Excerpts from unconventional one-person exhibits are scattered through the installation, like the Styrofoam cup from his first solo show of household objects, Bliss, at a Pasadena arts cooperative (located in his own home). Like other elements in that show, the cup wasn't just a found object but was outfitted as a pinhole camera, rigged to take self-portraits in a mirror. Relatively severe black-and-white photos from the 1988 project in Pasadena are shown at MOCA, introducing a body of work that otherwise seems both lushly pleasure-oriented and oddly un-human - like a show about human beings, but one made by objects and perhaps for objects, in the sense that Pardo's things are self-regarding, caring much about beauty but little about comfort or usefulness. It's hard to imagine what kind of people might have lived in the rooms reconstituted here, using the few things included in the exhibition that are fully usable. Whoever they are or were, they are notably absent, as if they went on vacation and forgot to come back. One question might be, are they needed? Pardo's deserted domestic scene is strangely self-sufficient.

"Portrait of George Porcari, 1995," for instance, is a bookcase filled with mainly 20th-century literature. Porcari is a research librarian and friend with whom Pardo worked as an assistant at the Art Center College of Design in Pasadena. Porcari reportedly picked out the books for this portrait study, which makes it also a self-portrait of a kind. Ranging from the collected writings of Edgar Allan Poe to novels by James Joyce, Gore Vidal, Saul Bellow, Vladimir Nabokov and so on, the generic-looking bookcase includes volumes about film and works of criticism, as well as a mere handful of oversized illustrated art books - Van Gogh, Manet - that might be found in almost any liberal arts-oriented home. Somewhat surprisingly, the work seems more like a prosaic sketch of late modernist cultural orientation than a portrayal of any particular individual's tastes. But this impersonal quality fits well with Pardo's overall interest in ratios of personal and impersonal usage, and how objects are transformed by context. His manufactured-seeming, one-of-a-kind phenomena shift truisms and clichés of modern design and theory toward something far less familiar.

In Pardo's world, household objects journey toward aesthetic independence. They begin by describing late-20th-century ideas about the role of design in daily life, but evolve toward a dreamlike time and place (perhaps it is here and now) where things gather in formerly human homes, like colonies of exotic insects or banks of flowers. This is especially true of Pardo's lamps, like the 38 yellow perforated shades made from PVC, wood and wire arranged in a long, drooping "X" formation on one of the "living room" walls. They look like over-sized flower petals, glowing with pollen. Pardo regards the shadows his lamps create as a sort of abstract drawing, and here his untitled 2002 installation traces rib-like lines and graduated fields of light and shade across the long wall. Like almost everything in the show, the grouping in on loan for the exhibit from a private collector. The "Portrait of George Porcari" belongs to someone in Berlin. Questions come to mind such as, How are these things used or treated and regarded when they are "at home"? Does the Berlin collector occasionally take out the volume of Poe and read one of the stories or essays? If so, does this alter the work in some way?

ÊIn 1998, Pardo's project for a one-person exhibit organized by Los Angeles MOCA was the house in which he and his family now live, constructed for the occasion in the hilly, artsy Mount Washington area on Los Angeles' East Side, a location where many modernist homes were built during the 1950s and 1960s. Pardo's is a pretty amazing idea, and not because the artist got a swell place to live out of the deal - the museum paid a mere 3 percent of the total cost of the multi-level 1,800-square-foot redwood and glass structure. Rather, it's impressive in its comprehensive erasure of boundaries between art and life, thought and practice, history and the present. Every inch, every object, was designed by the artist over a period of five years, at the end of which time Pardo's solo exhibit took place.

The house, titled by its address, "4166 Seaview Lane," was available as an off-site location that L.A. MOCA's audience could visit during museum hours. Afterward it became the family's home, yet it was still the subject of much curiosity and commentary as a work of art. At this point, its glass walls afford a view of its art historical significance as well as of the southern California hills. At bottom, Pardo's work is about those moments when a thing is perceived as art - as especially meaningful or estranged from the ordinary - and how that perception comes and goes through the rooms of the mind. Ê