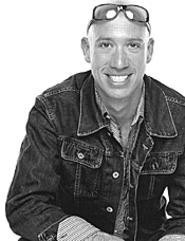 Surprise by Design host Robert Verdi loves outlet stores. "I grew up in New Jersey, and I was obsessed with them," he explains. "My parents let me live in the wild of the malls. It's like Vegas: I'm on the hunt to win. I love finding the greatest shoe from last season for $99." The easily excited star of the Discovery Channel's decorating show is used to shopping on a budget (he's given a mere $2,500 to make over homes on the program) and claims that bargains are easy to find at outlets . . . if you know what to look for. "The merchandise could just be a little less fresh than you want it to be," he says. "But trends hold for a long enough time. Just be aware of last season's trends and what the current season pushes toward." Verdi shares tips at Aurora Premium Outlets (549 Chillicothe Road in Aurora) from noon to 6 p.m. Tuesday and 10 a.m. to 2 p.m. Wednesday. Admission is free; call 330-562-2000. -- Michael Gallucci

Keith Chelm has connections. After sampling the Cabernets and Chardonnays at the inaugural Wesfest Jazz & Blues Festival last year, the BackUp Band keyboardist thought: How can my guys get a gig here? A few phone calls later, and the networking paid off. The band shares the bill Saturday with seven local blues giants, including Mr. Downchild, Blues DeVille, and the Tri-Tones. "I heard the Tri-Tones last year, and they were just great," Chelm says. But the festival is more than just 10 hours of acoustic Delta and Chicago-style blues in the open-air Mapleleaf Theater; wine connoisseurs can check out the latest offerings in an indoor tasting room. "And you thought we only drank Rolling Rock and Jim Beam," Chelm says. Festivities start at 1 p.m. at Harpersfield Vineyard, 6387 State Route 307 in Geneva. Tickets are $16 and $20; call 440-466-4739. -- Cris Glaser

Of all the Legends of Lake Erie -- spooky tales told every Friday this summer on the Nautica Queen's lunch cruises -- it's the one about Bloody Mary that should make every Cleveland girl watch her back. "She walks out of the water and kidnaps younger women and murders them," explains spokesperson Colleen Grey. "She takes the best part of their bodies to build the perfect woman to win the love of her life." Legends start at 11:30 a.m. Friday on the Nautica Queen (1153 Main Avenue on the West Bank of the Flats) and continue through September 24. Tickets are $23.95, $13.95 for kids; call 216-696-8888. -- Cris Glaser