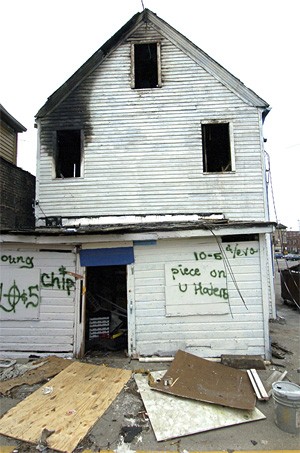 Sure, the foreclosure crisis is destroying Cleveland, spreading a virus of boarded windows and stripped plumbing from Slavic Village to Kinsman. The brave few who remain are left to watch their home values plummet every time a house is repossessed, then left to rot by the bank. But at least someone's profiting.

Turns out that real estate fiends from as far away as Florida and Texas have been buying up the slums of our fair burg, then flipping the houses on eBay for as little as $810.

Take the ad for a three-bedroom home on East 125th Street, euphemistically known as a "handyman's special." The seller, who hails from Branford, Florida, is very up front.

"I haven't seen the place," he writes. "It was bought with no disclosure, no guarantees, and I am selling the same way."

Then there's another three-bedroom, offered by a man named Clint from Texas, who doesn't want any pesky questions about the home he's unloading for $1,500.

"We have limited knowledge about the property, so please don't ask, 'How's the furnace and the roof?' We don't know," the ad says.

But despite a 50 percent plunge in the price of home sales last year, at least they're still selling for as much as a gourmet steam cooker or a prom dress on Long Island. We needn't really start worrying until they throw in a five-bedroom home in Ohio City with each purchase of a $19.95 steak-knife set.

Jimmy Under Fire
Commissioner Jimmy Dimora brought his A-game last week, accusing The Plain Dealer and the Republican Party of conspiring to take down the vaunted Cuyahoga County Democratic Party. Four out of five leading psychologists agree that it was Dimora's most delusional performance to date.

Naturally, Dimora isn't keen on the idea. It could put a dent in the Democratic Party's patronage system, which guarantees employment to the otherwise unemployable relatives of party big shots. So Jimmy accused The PD and Republicans of conspiring to push for restructuring. His evidence: He once saw Editor Susan Goldberg and Editorial Page Director Brent Larkin lunching with Ohio Republican Party Chairman Bob Bennett. And during said lunch — cue the soundtrack from Teenage Exorcist — they apparently laughed!

In the walnut-size spin room that is Planet Dimora, this constitutes a nefarious plot.

Never mind that big-shot editors lunch with big-shot politicians all the time. Sometimes, due to basic rules of cordiality, they even laugh.

And never mind that restructuring originated with Hagan, a fellow Democrat. Not known as a man of action, Hagan likely had little interest in making it happen. He was simply looking for a one-day headline, after which the plan would be stored behind some plywood in his garage.

Unfortunately, Republican House Speaker Jon Husted jumped on the idea, saying he would move legislation allowing Hagan to put it on the November ballot. Suddenly, the commissioner's one-day headline had turned into a self-inflicted disaster — which could end up throwing a slew of party hacks out of office.

Jimmy's smart enough to know that if the plan reaches the ballot, it'll pass by a landslide. In these parts, county government is held with the same esteem as the Backstreet Boys and George Bush — a banal form of evil that's hard to explain.

What he's not smart enough to do is convince voters why they should reject it. So Auditor Frank Russo trotted out a comical blockade. He wants to appoint the ubiquitous 21-member "task force" to study the idea. And since his job would be eliminated under Hagan's plan, Russo has graciously volunteered to chair his task force to ensure that he keeps it.

Seventy-nine months from now, expect a three-page report — written in crayon — revealing that he probably doesn't need that extra copier he bought from the salesman who gives him free Tribe tickets.

But here's the funniest part: Restructuring will do nothing to actually improve government. Department heads will still be appointed by Dimora and Hagan. Which means the coroner's office will still be stocked with relatives of state senators who once watched CSI: Miami. And auditor's jobs will be filled by people who successfully balanced their checkbooks in 1993.

Until the party's self-proclaimed reformers like Dennis Kucinich and Joe Cimperman rise up against The Fat Man, the death spiral continues.

Crimes Against Fluffy
In a rare bout of usefulness, the Ohio House last week approved a bill that strengthens penalties for torturing animals. The measure, introduced by Representative Brian Williams (D-Akron), will make cockfighting and pit-bull battles slightly more illegal than kicking a broken lawnmower.

Though it only turns second-degree misdemeanors into firsts, it has the stipulation of enforcing mandatory counseling for kids caught abusing animals. The FBI considers animal cruelty a major predictor of human cruelty later on in life. This may not extinguish the next Jeffrey Dahmer, but it could slim the pool of next-generation wife beaters.