How (Not) to Name Your Band 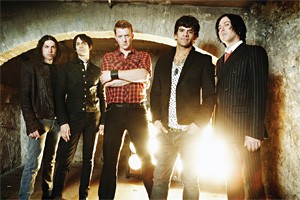 There are worse things in the world than naming your band something annoying. Things like killing people or donning a diaper and chasing some astronaut cross-country or, say, literally getting away with murder, only to bust years later into a Las Vegas hotel room with a bunch of guns and try to get all your little sports trinkets back.

But if you want to read about that stuff, grab a copy of Time. We're here to bitch about things unimportant. Like the bands !!! and Do Make Say Think, to name a couple. !!!, according to the group, should be pronounced "chk chk chk" or by using any other sound uttered three times. And Do Make Say Think? Can you just call yourself Do May Say Think, because that's what we all end up saying anyway? Or better yet, call yourselves the Pretentious Post-Rockers.

We're offering a list of tips for new groups who hope to come up with the world's best band name. Follow our advice, and you're guaranteed to come up with the best moniker since the Velvet Underground. Unless you're a post-rock band; then you can call yourself whatever you want, because no one really cares.

Let's get something straight: Puns should be relegated to chess-club meetings, punch lines for jokes on bubblegum wrappers, and 1950s stand-up routines. It's rock and roll, not Mr. Dorkus' Comedy Hour.

We like Stephin Merritt's many side projects — we really do. But calling your band the 6ths and calling the 6ths' album Wasps' Nests, so that one must identify it as "the 6ths' Wasps' Nests" is just plain mean.

It can be pretty funny to make up band names that sound like they came from the mind of a giggling fifth-grade boy. Music fans are as immature as they come, and we'll get a laugh out of saying, "Have you heard the latest from Grandma's Pussy?" the first 50 times. But once the novelty has worn off, you're left with nothing but joyless filth.

4. Anything with the word "whiskey" in it is guaranteed to blow.

Do this, and you're destined for the Tuesday-night opening slot at Checker's Pool Hall and Sunday-night blues jams.

2. Try not to name your band with an adjective and a noun.

You know, like "the Galloping Roosters" or something. It just sounds so . . . your dad's generation. And it's a no-no. Unless, of course, you're calling your band "the Adjective Nouns," which would turn that no-no into po-mo.

3. Only Prince may use a symbol instead of a word.

4. If your band name can be identified by an acronym consisting of its first letters, à la QOTSA (Queens of the Stone Age), it's too long.

Think of it this way: You are onstage at a festival in the middle of some sheep pasture in England. Your band is called ". . . And You Will Love Us but You've Chosen !!! Queens of the Grandma Pussy." You are performing in front of 100,000 Brits and international press. Spin is here! Veteran music critic Robert Christgau has wheeled his walker backstage to cover you! Topless groupies drunker than Amy Winehouse at a kegger are waving their bras to get your attention. You are kicking ass; your band never sounded so good. The crowd wants to chant your band's name to show how much they adore you, so they take a collective deep breath and start shouting, ". . ." Then they realize they'll never be able to get it all out without passing out. And also because no one knows how to pronounce ". . ." — although !!! might be able to give them a few pointers. This realization takes the momentum away from the crowd. They start to lose their passion. The music writers put down their free vodka tonics and scribble that you couldn't sustain your musical hard-on. The groupies put their shirts back on. Christgau falls asleep, losing his grip on his walker in the process. It slips out from under him and skids onto the stage, and you trip over it, dropping your $7,000 vintage Gibson and wrenching your back in the process. Rehab takes seven months, during which time your drummer falls in love with your rehab nurse. He quits the band to get married and raise truffle-sniffing pigs in southern Italy, thereby breaking up the band. You, meanwhile, develop a brutal addiction to painkillers and end up in rehab for another three months, where you are accosted on a daily basis by Winehouse, who, in her hallucinating state of withdrawal, insists you are a nine-foot evil monkey who must be killed. By the time it's all over, you are a broke, depressed nobody. Best to avoid the whole mess and just call your band "And." Unless you're a post-rock band, because then no one cares anyway.