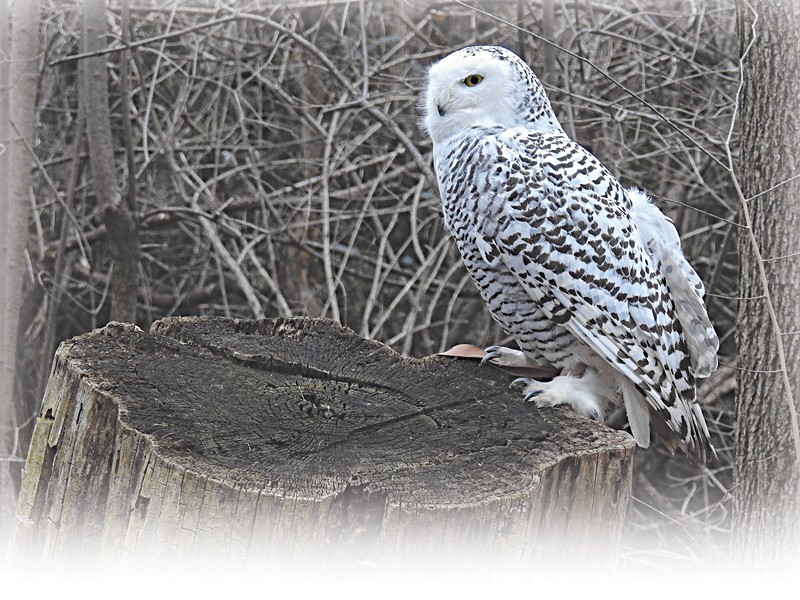 Word travels fast in the birding community. When Cleveland Metroparks naturalist Jen Brumfield dogged a rare long-eared owl along the lakeshore and posted a splendid photo on Facebook in late November, eager crowds followed her footsteps. Within the week, at another Cleveland Lakefront Nature Preserve birding walk led by Brumfield's colleague, Jake Kudrna, that's the first question on people's minds: Will we see the long-eared?

We don't, as it happens. Aside from a few loons and grebes bobbing gently on flat water, all Sunday-stunned beneath warm winter sunshine, we don't see much of anything. On our way out of the preserve, a bearded man with a telescopic lens pointed into dense overgrowth tells us: "I've been here since 6 o'clock this morning. No owl." It was 11 a.m.

This is how things go in the land of birds: Sometimes you score a big one, and other times you stand in the woods for hours, neck tilted back, eyes darting, pondering the silent rhythm of the trees. There is no plan; all is random.

In the more desolate stretch of winter in Northeast Ohio, the odds grow even longer, like afternoon shadows. Migratory flights have come and gone, and only the sparsest adventures await the birdwatcher.

Last year, a surprising population boom of snowy owls landed in Northern Ohio around the holidays. The phenomenon was a rush of excitement for local birders. What happened was this: Way up north, on the lush, coastal grasslands past the Canadian taiga, populations of snowy owls were suddenly having more than the typical singular seasonal brood; lemmings were everywhere and, across the tundra, prey was bountiful. "Young birds were raised quickly and successfully without much loss," Brumfield says.

With good fortune at their back, having migrated from the northern territories to our balmier lakeshore climes, more than a dozen snowy owls were spotted in the Greater Cleveland area. People from around the Midwest showed up for the phenomenon. Television crews parked their tripods on the windy lakeshore. Field guides were referenced. Words like "irruption" were used in evening newscasts.

The snowy owl is an illustrious species. It's accessible, in a visual sense, the sort of bird that appears omnipresently in children's books and evocative wilderness tableaux. It's a large bird, larger than the great-horned owl. They're gleaming white, peppered almost uniformly with small gray and black spots. The males are paler, and the females demonstrate a keener, patterned fashion sense. Because they're apex predators, they find comfort out in the open, keeping watch over the broad expanse of our lake. The surface of the water mimics the Arctic lowlands back home, and the 5-mile break wall gives the owl a pleasant vantage point for dinnertime.

"While snowy owls typically do hunt at night, since they are top predators, top of the line, they are not worried about anything. They do not hide," Brumfield says. "Snowy owl just doesn't care. Snowy owl is gigantic. ... That's one of the reasons why they're fan favorites, is because people can actually get out to see them."

It's easy enough to pop down to Wendy Park on a Sunday morning and have a look-see for a snowy. Check marina docks. Check telephone poles, fence posts.

This year, based on migratory reports so far, the numbers just aren't there. Brumfield says we'll see fewer snowy owls in Northeast Ohio this winter. Maybe one or two in Cleveland.

In mid-December, we receive word that someone had spotted a snowy owl at Cleveland Hopkins Airport. There, they roost on light posts and squat buildings. "One has arrived," Brumfield confirms, adding that the first sighting is coming a little later than usual. "You're gonna have to go to where they are, as opposed to just waiting."

According to the International Union for Conservation of Nature and Natural Resources (IUCN), the snowy owl was listed as a "vulnerable" species in 2017. Only 28,000 members of the species remain, as an estimate, and the population is trending downward. From 1988 to 2017, the snowy owl was listed as a "least concern" by the IUCN, which means that now, conservation efforts are taking on a greater urgency. It probably goes without saying that curious families should do what it takes to see this majestic bird before it's too late.

Brumfield leads Metroparks birding walks fairly often. She's quite in tune with birds, and she's spotted rare species throughout the region. In 2017, she saw 271 species of birds in Cuyahoga County, breaking a local record that she, herself, had set in 2012. On the walk where she found the long-eared owl, fellow birdwatchers had shown up and asked about the snowy owl. It is a presence during these wintertime events, a luring mystery.

We join Brumfield's lakeshore birding walk on Dec. 10, hoping to find some interesting birds. Maybe a snowy owl will materialize on the break wall? We stand near the pier at Edgewater Park, trying to gaze past thousands of Ring-billed Gulls sitting meditatively on the water. A flock of red-breasted mergansers floats by, almost glimmering in sunlight.

Seeking something more exciting, we decide we may as well drive over to the Cleveland Lakefront Nature Preserve and see about an owl.

Whether it's the long-eared owl, an enticing snowy owl or the bijou and easy-to-miss northern saw-whet owl, Brumfield says she's feeling good about this. She's optimistic, and the group echoes her zeal. This is a great time of year to see owls in Northeast Ohio, after all.

Once inside the nature preserve, she's scouring the trunks of spruce-firs and Scotch pines, looking for whitewash and pellets, the telltale signs of a roosting owl. As the group sort of mingles along the trail, looking here and there and finding only jabbering blue jays and a red-bellied woodpecker, Brumfield wends deeper into the brush, calling out and remarking on the "piles" of whitewash that she's finding. Surely an owl is nearby.

Brumfield describes the characteristics of the likely northern saw-whet, a fist-sized bird that often perches daintily above eye-level. We continue to search the branches.

After about an hour and a half of striking out, though, we can only speculate that the long-eared owl spotted last week must have eaten the northern saw-whet that Brumfield insists she's tracking. These things happen.

We take to the pines ringing the parking lot, looking for faint glimmers of hope. Perhaps the tiny owl had been pushed out here, pushed out of the nature preserve and into the buzzing world of humans and traffic?

Ultimately, though, it's time for us to leave. Brumfield has to get back to the Rocky River Nature Center and, anyway, the Browns game will be on soon. It's time to pack it in and get back to everything else. And then, suddenly, a shout!

Sure as shit, in the first tree we passed when we got here and the last tree we check before leaving, she's spotted a tiny ball of fluff, high in a pine and all curled within itself. Feathers lifting and falling rhythmically. It's almost impossible to see with the naked eye, what with the saw-whet's natural striping blending in perfectly with the needles and bark. How did she see this diminutive creature, this speck of life? She brings the spotting scope around and we all peer in to see the sort of atavistic miracle that only comes around rarely, and only for those with open eyes.

It's an incredible stitch of serendipity. Just the sheer narrative arc of the morning was enough to stop us in our tracks, trading smiles and looks of wonder. More birders seem to be showing up out of nowhere, somehow called magnetically to the moment. We look again into the spotting scope, beholding the minutia, the surprising relief dwelling in the quieter hollows of life.

Some folks are talking about coming back and awaiting the tiny saw-whet's eventual flight; others are planning a meet-up at Hopkins later in the day to maybe see the snowy owl. It's impossible to know what will happen, what will be seen. Curiosities fly around us like invisible fledglings, drawing us closer to a sense of hope when it's needed most.