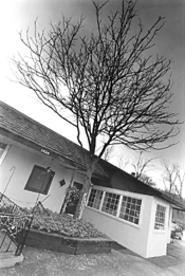 Nestled on a wooded lot on Akron's Merriman Road, right between the Cuyahoga Valley Railroad tracks and the historic Towpath Trail, sits Jim Conis Bar & Grille. The cozy spot was once home to the popular Beau's Tavern, which relocated to more spacious digs in nearby Fairlawn a little more than a year ago. First-time restaurateurs Conis and his wife, Manny Manal, purchased the space soon after Beau left and, to assist them, procured the services of Frank Kuk, an experienced culinary professional who worked with Zachary Bruell at Z's Contemporary Cuisine in Woodmere and served as chef at the Good House, near Sugarcreek. Fine dining was to be the order of the day, and Kuk was widely expected to bring his personal brand of seasonal, contemporary cooking to the Merriman Valley.

Suffice it to say, that isn't the way things turned out. Although Kuk is in the kitchen, the self-taught Manal claims much of the responsibility for the current menu and does a large part of the cooking. In general, her focus (steaks, chops, shrimp cocktails, and even sauerkraut balls and mozzarella sticks) is firmly in the mainstream, although a few more modern items, like walleye with sautéed risotto cakes, do make a showing. (However, it's worth noting that entrée prices, around $15 to $20 when the restaurant opened, have been modernized and now dwell in the $17 to $29 neighborhood.) Though this obviously hasn't become the cutting-edge restaurant that food lovers had hoped for, Jim Conis does continue to aspire to the fine-dining designation. But while the kitchen is capable of showing some muscle, it often misses the mark by overlooking details and using less-than-prime ingredients.

Meats and seafood, in particular, are well handled and attentively prepared, and at least some of the appetizers are nearly as good as anything we've had at top-rated dining rooms. But there is no reason for a restaurant with fine-dining aspirations to serve flaccid white bread and aluminum-foil-wrapped butter pats, say, or to dust plates with dehydrated parsley, rather than using fresh herbs. In the same vein, the "chef's vegetables," dished up with nearly every main course, are the same tired trinity of broccoli, cauliflower, and carrots that surfaces in second-tier restaurants across America. And the house salad (included with entrées) is a dull composition of limp greens, a crescent of cucumber, and a wedge of mealy hothouse tomato.

Yet, if the house salad was easily dismissed, not so the homemade salad dressings. Both a standard balsamic vinaigrette and a creamy white French were delicately balanced and mellow. And a hot, chunky bacon dressing, tossed with a big specialty salad of pristine baby spinach, finely chopped egg, shallots, and whole toasted pine nuts, was one of the best we've come across.

However, the kitchen does seem to have an unfortunate propensity toward thick sauces that threaten to overpower some dishes. A starter of warm mushroom strudel, a savory little number made with a blend of sautéed mushrooms, garlic, shallots, and goat cheese, all wrapped in leaves of crackling crisp phyllo, was a case in point. Though the strudel was more than good enough on its own, its admirable qualities were nearly lost in an encroaching river of sweet, sticky brown sauce (allegedly Madeira cream sauce) that attempted to swallow it up. And the beefy goodness of a thick strip steak, cooked precisely to order and goosed with a few whole black peppercorns, was dulled by a puddle of congealing brown sauce that the menu called bourbon-shallot demi-glace.

While the steak turned out to be a tad on the tough side and perhaps not quite up to Morton's standards, it didn't need all that sauce; in fact, together with a massive helping of crisp-edged homefries, it made a satisfactory meal, once we scraped away some of the gravy. The kitchen did much better with an entrée of pork chops: two husky fellows marinated in olive oil and spices and gently broiled just this side of medium-rare. Exceptionally tender and juicy, the chops were classically paired with a refreshingly small amount of light, apple-flavored sauce; on the side, buttery mashed redskins, with the barest hint of garlic, were worthy companions.

Beyond steaks and chops, the standard menu, and its one-page addendum of daily specials, includes a few routine pasta dishes, the occasional Middle Eastern dish reflecting Manal's Lebanese heritage, and a broad selection of fish and seafood. There were broiled cold-water lobster tails and steamed Alaskan king crab legs, as well as preparations like pan-roasted salmon with a mustard-seed and lime-zest glaze, and ginger-encrusted sea bass with rosemary-Hollandaise sauce. Seared filets of tilapia (a mildly flavored fish with fine-textured flesh) were delicate and fresh-tasting, served on a bed of pleasantly sweet caramelized red peppers, onions, pine nuts, and raisins. Five large sea scallops tasted fresh and were reasonably tender, and were complemented by drawn butter and an Asian-influenced tangle of thinly sliced, stir-fried red and green peppers and onion; a little fried-potato "basket," stuffed with more stir-fried veggies, was a creative touch that helped elevate the dish out of the ho-hum and added the kind of flair we wish the kitchen would demonstrate more often.

The wine list includes about four dozen wines by the bottle and eight by the glass, with an emphasis on chards and cabernets, mainly from California and France. Most of the wines are reliable choices with high brand-name recognition, like Estancia, Silverado, and Burgess, and the prices, set at $15 to $60, are typically bargains -- at least compared to the usual restaurant markup. But even at such reasonable prices, management could probably boost sales (and not coincidentally, educate consumers) by adding a few more interesting and imaginative choices and providing more details -- say, countries of origin, vintage dates, and brief tasting notes -- in the listings. As for cocktails, a Bombay Sapphire martini was plenty dry, but not cold enough; a Tanqueray and tonic was generous and well made. The bar also stocks imported and domestic beer, including Bass, Grolsch, Sam Adams, and Red Stripe.

The restaurant saw plenty of wear and tear while it was Beau's Tavern, and it doesn't look as though the owners have done much to spruce it up since then. Chairs are scuffed, ceiling tiles are stained, and the decor is a sort of stylistic hodgepodge that includes both tropical fabrics and English hunting prints. Still, white tablecloths and napkins (albeit with white paper place mats), subdued lighting, and pleasant servers lend the restaurant an air of well-worn gentility and make it a comfortable spot for enjoying a cup of good coffee and one of the kitchen's simple, straightforward crème brûlées. (Most of the other dessert options are the usual, out-of-house cheesecakes, carrot cakes, and tall tortes. If a piece of so-so carrot cake, settled on a grid of brightly colored sauces that tasted remarkably like Jolly Ranchers, is representative, they aren't worth the calories.)

For all the excitement that Kuk's arrival stirred up among area restaurant lovers, Jim Conis's restaurant reflects the sensibilities of its owners far more than any highfalutin concepts of contemporary cuisine. This, of course, is not a cause for criticism. But regardless of its orientation, if the spot hopes to lay claim to the fine-dining title, it still has a distance to go.