On his upcoming LP, much-hyped rocker Andrew W.K. tries to live up to his party-hard rep. 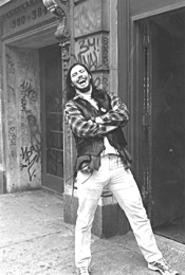 To those who consider drinking Budweiser a sacrament, the arrival of Andrew W.K. may as well have been the coming of a shaggy-haired savior. A deity clothed in dirty white, he spread the gospel of the almighty party with his 2002 album, I Get Wet, providing testosterone-charged salutes to alcoholic shenanigans ("We Want Fun"), maniacal excess ("Party 'Til You Puke"), and, well, more excess ("Party Hard").

The NYC-via-Detroit resident bellowed these testaments with intricately produced layers of cracked piano, head-smashing guitars, and pummeling drums -- smart arrangements that transcended any dumbass vibe and sent critics, punk rockers, and audiophiles into a fawning frenzy. However, for every positive review, adoring fan, or Coors Light commercial to W.K.'s name, there were twice as many nonbelievers who lumped him in with mook-metal lunkheads or doubted that he was for real, finding the earnest persona and unabashed enthusiasm he displayed onstage and in interviews ironic, insincere, or simply insane.

The Wolf, W.K.'s return to fist-pumping form, certainly won't silence his haters. What he wants to achieve with his second album is exactly what he hoped Wet would accomplish -- as he puts it, "to make the most powerful music possible."

"I Get Wet was talking about having a celebration and having a party, and The Wolf talks about how it feels," he says. "I'm talking about how wonderful I feel with all that's happened and directly thanking the people that have made it happen.

"It's music made for the pleasure of listening to it, itself," he continues. "There's not one particular message I want to get across. It's being built to demand a response from the listener, who hopefully feels less like an observer and more like a participant, when the music's playing. It's an absolute continuation of what the first album established -- enjoying life and appreciating it, and keeping it as hard and intense as you can."

While sonically similar, the lumbering tempos and towering riffs on Wolf aren't as obviously tequila-shot-friendly as Wet. "Tear It Up" is an epic, slow-motion headbanger, while "Never Let Down" strides triumphantly, like a cinematic conquering hero who just single-handedly saved the world and got the girl. If Wet conjured an Old School mentality, The Wolf is emotionally more on a par with Gladiator.

Andrew W.K.'s major-label bean-counters might find this shift troubling, though, as Wet's album sales didn't exactly set the Billboard charts on fire. It sold fewer than 200,000 copies, despite being hyped everywhere from Rolling Stone to Alternative Press.

"I'd love to be able to -- right now -- play for 40,000 people in a baseball stadium and sell 20 million albums on the first shot," he says. "But, for a brand-new band that came out of nowhere, that would be crazy. I don't want to focus on what we don't have. I want to focus on the hundreds of thousands of people that do like it and the millions of people that do believe in it. There's not a certain goal or a certain accomplishment that's gonna tell me we're succeeding.

"I think to some people [The Wolf] will sound very different, and I just hope they can listen through it a few times, give it a chance, and not be put off by what might sound like a difference. It's gonna take courage to not necessarily dissect it or break it down, but let it really course through you and saturate you with what it is, before you even have a chance to understand it or explain it."

His placing emotion before thought is probably what makes the intelligentsia accuse W.K. of being nothing more than the soundtrack to fratboy beer-bong tournaments. Yet this dismissal is unfair; why must things that feel good be perceived as somehow stupider than what is deemed high art? More important, what makes people wary of a musician who humbly exhorts others just to enjoy themselves?

The answer might lie in the oddly religious fervor W.K. displays when discussing his music. In fact, he talks about persuading his detractors to see the merits of his music as a preacher might proselytize to the unconverted.

"I'm so excited about it that, when someone doesn't initially or immediately share that view, of course it can be frustrating," he admits. "But, if anything, it's motivating. I'm convinced that if I could sit down with someone and talk to them -- even for just 10 or 15 minutes -- and tell them how I feel about it, maybe they wouldn't like the songs or the melodies still, [but] at least they would understand where it's coming from."

Perhaps much of the derision for both him and his music stems from his encouraging people to drop their cynical facades. Furthermore, by challenging us to put blind faith in the very human urge to celebrate, he's asking us to embrace the hedonistic feelings we're taught to suppress.

To Andrew W.K., it's not about going platinum; it's not about having a buzz-bin video. It's simply about the tunes and how good they make us feel. The Wolf might not elevate W.K. to superstardom, but he's willing to become a different sort of figure to his acolytes, selflessly devoting himself to music because he believes so strongly in its inherent ability to create joy.

"The passion that people have in this, and the belief that they have in it, is going to be ultimately the way that this carries over," he says. "It's going to be the passion that other people have, the belief that many people other than myself have, that makes this good. I just want to be one of many people that feels in love with this music. I plan on doing [this] for a long time -- and considering that it just started, I think we have a long ways to go and plenty of things to accomplish over the years to come."