In rural Ohio, meth heads risk everything for a thermos of corn fertilizer. 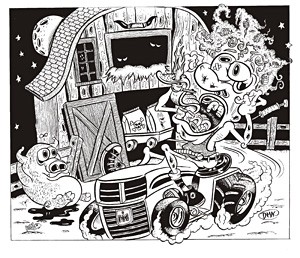 Farmdale is as placid as its name suggests, consisting of little more than a barber shop with a pop machine on the porch and a feed store that sells bags of peanuts for 75 cents. The police department is a shack with bowling trophies in the window. If you want to speak to the cop on duty, you'll just have to wait on the wooden steps for his return.

It seems every house here is connected to a cornfield. A city slicker can't help but imagine Kevin Costner walking into that feed store and asking if other farmers ever hear the voices of long-dead baseball players in their fields.

But on this day, in this village near Youngstown, the locals would more likely respond, "Damn, boy, it sounds like you got meth heads."

Around 2001, people here discovered that a fertilizer called anhydrous ammonia was being used to make meth. The telltale signs of theft had been there for years: cut fences, leaking tank valves, and deputies' warnings to look out for thieves.

But farmers were slow to believe. Though nothing pumps nitrogen into soil faster, anhydrous is a devil of a chemical. It causes third-degree burns and frostbite on contact. Farmers wear heavy clothing, goggles, and gloves just to release the stuff into hoses. Who would be moronic enough to siphon it into a thermos?

"It's not fun at all," says Ben Miller, a fourth-generation anhydrous dealer. "What it naturally tries to do is find the nearest water source. So it keeps eating through your skin until it gets enough water to neutralize it."

But it's also an essential ingredient of the "Nazi method" of cooking meth, so named because the recipe is said to come from an old document emblazoned with a swastika. The formula calls for, among other things, a few cups of anhydrous, six lithium batteries, pounds of dry ice, a couple cases of starter fluid, a bottle of drain cleaner, a box of salt, and about a thousand Sudafeds, or any other pill containing pseudoephedrine.

The pseudoephedrine is the most difficult to get. To beat laws limiting purchases, cooks skip from county to county hitting pharmacies. But they always seem to know which farm has an anhydrous tank.

Four generations of Miller men have been selling the chemical since it was first synthesized in 1946. Thirty-five one-ton tanks — known as "white buffalos" in methspeak — sit in neat rows outside the Millers' modest farmhouse. A few horses meander nearby. Behind the field, three giant silos loom, brimming with hundreds of tons of the chemical. To meth addicts, this is Mecca.

Though it could have been happening for years, the Millers first discovered their tanks were being siphoned around 2001, when Ben's father began catching intruders late at night. In high school, Ben would be awakened by the wail of sirens radiating through the farmstead. He once looked out his window to see two deputies tackling a thief.

Farmers throughout the Midwest were beginning to understand just how brazen addiction-possessed cooks could be. "You're dealing with a group of people who are totally committed," says Tom McNamara, an Illinois cop turned meth consultant. "Nothing else matters."

The "buffalo rustlers" arrive at farms in teams of two or three. Sometimes they use two-way radios. Sometimes they're armed. They'll bust open a valve, allowing the skin-peeling chemical to gush out. Because anhydrous is extremely pressurized, they'll use propane tanks or empty fire extinguishers to carry away their treasure. But since "smart" and "meth head" aren't commonly used in the same sentence, some will simply use flimsy plastic buckets.

The horror stories are endless. Cops will tell you about meth heads losing eyes when valves burst in their faces, or scorching their testicles when they're "riding the buffalo" — sitting on a valve to gain leverage to fill a plastic thermos. McNamara recalls three Illinois thieves who were hitting an anhydrous dealer weekly. One had two fingers "literally mummified" due to anhydrous exposure, he says. "They had become black, lifeless stumps" that had to be amputated.

The Millers' customers tried to rid themselves of the problem, renting the tanks during fertilization periods and leaving storage to the Millers. It became a classic case of supply and demand: If you needed anhydrous in Trumbull County, you'd have to hit the Millers. A few years back, ambitious thieves hitched an entire tank to their car and sped off. Deputies later found it upside down in a ditch.

His father decided to finally put a stop to it. "They called, saying they were getting hit up to twice a week," says Orr, who worked with the Millers to set up a laser-detection security system around the farm. The burglaries seem to have slowed, but Ben Miller is hesitant to declare victory. "They could have figured out some way to bypass it."

Still, most farmers can't afford such extravagant measures. Locks are simply sawed off. So McNamara helped develop a dye that stains a thief's skin bright pink. "The cooks just didn't care that they were stained pink," says Scott Duff of the Ohio Bureau of Criminal Identification and Investigation.

An additive developed in Idaho, which reduces the effectiveness of anhydrous in cooking meth, has nearly cured the problem in that state, where it's provided free to farmers. But elsewhere, it costs almost a dollar extra per fertilized acre, a cost agriculture is slow to take on.

The solution is clear to Rich Roscoe, owner of Roscoe Fertilizer, a wholesaler located about a mile down the road from the Millers. "I don't use it and never will," he says of anhydrous. He sells urea, a pellet fertilizer that takes a bit longer to work, but is nontoxic and unappealing to meth heads. "I think anhydrous will be outlawed one day."