Unconstrained by crunk, Rick Ross defines only himself. 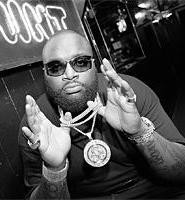 On the Saturday before Memorial Day, the poolside party at Hotel Victor in Miami Beach was off the chain, even by hip-hop holiday standards. In a swelter of body heat thick with pot smoke, elaborately underdressed female groupies swarmed the water. J.D. Williams, the handsome young breakout star of HBO's The Wire, stood on the table beside his cabana, seemingly stunned by the over-the-topness of it all.

Williams wasn't alone in his daze. Nelly and his St. Lunatics held center court on the hotel's veranda, Timbaland ditched his lo-carb diet for a platter of tacos, and Uncle Luke and Trick Daddy moved from bar to bungalow, as MTV's Sway nearly swung his boom mic into Deco Drive's competing crew.

With drinks a bit scarce and marijuana paranoia high, tempers flared. A few people were on the receiving end of shoves, and a few of those ended up in the water -- along with their Rolexes, Blackberries, and diamond-encrusted Mercedes pendants.

In a flash, an enormous man appeared at the edge of the pool, his girth separating would-be brawlers. Seemingly impervious to the tension in the air, the dude just stood there, sipping his cranberry juice, absorbing the cross-currents. He was dressed in pressed denim shorts, an Arab T-shirt, a somewhat comical Gilligan hat, and sunglasses.

This was Rick Ross to the rescue. He hung quietly for a few more minutes, nonthreateningly. His silent intervention calmed the proceedings, even as it upstaged the antics of this high-profile crowd.

"Supposed to be a party," Ross grumbled as he lumbered to a seat by the pool. "I'm always surprised how different -- different worse -- some people act when they get two dollars in their pocket."

Ross, in the midst of his second successful career, is suddenly everyplace. Though he released his debut album, Port of Miami, to great acclaim September 1, he's barely begun the struggle to remain at the top of the pop charts. Yet he's been anointed the new hip-hop heavyweight: The title is his to lose.

According to Billboard, Port of Miami shot to No. 1 the week it was released in September. In the autobiographical album, Ross pragmatically recounts his coke-dealing past. From his arrival by freighter to a bust in a strip club, the disc waxes docu-gritty, rather than Scarface cinematic.

"I don't deny that was my past," Ross rumbled a few weeks ago while searching for a grouper sandwich. "There'd be no point; I'm from here, and everyone else from here knows me from then. Everyone who is alive."

He says this as a matter of fact, not a threat. And Ross' past beefs have dogged him from time to time: A scheduled September performance at a downtown trouble magnet was canceled after the club's management got jittery when rumors of Ross-hating armed thugs hit the block; the University of Miami backed out of its sponsorship of another Ross show.

But you wouldn't know it to see the hip-hop star on the street. And he's seen a lot, tooling around in his blue convertible Rolls-Royce Phantom, which, he is quick to point out, he purchased with proceeds from the drug trade. "I wasn't thinking about the cars I was going to buy when I was making the record," Ross says.

Ross and the car are featured prominently in the video for "Hustlin'," the ubiquitous single from Port of Miami. The disc could've been a landmark to rival Jay-Z's The Black Album. Typical of crunk and Dirty South hip-hop albums, though, the record contains 18 tracks -- about 10 too many.

But Ross isn't just some no-talent, making vanity music with his drug money. When he throws his throaty growl over million-dollar beats, the result is something more than typically southern bounce music or Miami bass; his scope, unlike that of Trina and Trick, is epic.

"I don't have a gimmick line either," says Ross. "I have a certain type of flow, and it's all about the flow; it's not about yelling 'Yeah!' or 'Thaaaat's riiiight!' or speaking in tongues or whatever. I try to kill every beat."

Listening to Port of Miami is submersive. It plunges into a narrative of cocaine-dealing, gun-toting, and sex-fueled nights in which no one ever sleeps or really even closes an eye. "What's missing is an elegant sense of meter. He often seems to be rapping through the beat, and instead of flowing lines, you get a series of stand-alone phrases," observed Kelefa Sanneh, the hip-hop critic and history-keeper at the New York Times, in a late-September review of the disc.

Still, Ross' real-life rock tale, unusually direct delivery, and use of repeated incantations attracted the attention of Jay-Z in 2005. The hip-hop star then arranged for Def Jam to distribute Ross' label, Miami's Slip-n-Slide. His streetwise image isn't compromised by affiliation with Def Jam, says Ross; his objective is for people to hear his record.

"This album was 12 years in the making to be a classic," says Ross. "I had connections in the music world through business. Those individuals became aware of my interests, my writing, my talent . . . I ghost-wrote raps for years. This is more than a decade of my life, and people who hear it -- a lot of people -- are going to stop and think about Miami."

Ross is similarly unapologetic and direct about the image he presents -- as a gangster turned music mogul -- to his fans.

"Look, my philosophy is this: Get the money," Ross says. "My objective for my people, the example I wish to set is: When we have more money, we have the agenda. Once we blacks control financial operations, that's where talking about other things begins."