I Scream, You Scream

Inside the world of death-metal's premier vocal coach. 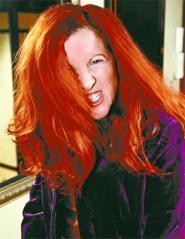 A guttural growl straight from the deepest pits of hell has just emanated from the throat of Melissa Cross, who follows it up with a giggle.

"See, that didn't hurt at all," she says. "But you should see the looks I just got!"

That's because the chipper red-haired late-fortysomething voice instructor is screaming, er, speaking via cell phone from a train between her native Manhattan and Long Island. She's trying to show that there's a right way and a wrong way to howl -- a lesson she tries to impart to the dozens of extreme metalcore, screamo, punk, and hard-rock singers who come to her studio looking for ways to bellow bloody murder without shredding their vocal cords.

Trained in London as a classical singer, Cross was drawn to punk rock in the late '70s and fronted a string of bands, opening for the likes of Black Flag and the Circle Jerks.

"I was screaming my guts out at CBGB, but I was studying opera," she says, "and I ended up throwing all that classical technique out in order to get the sound I wanted, and I injured myself. But in researching speech pathology and speech therapy and the mechanism of speaking, I figured out how to heal my vocal cords and then discovered ways to scream without hurting myself."

In the mid-'90s, a friend in Connecticut who was producing a number of underground metal acts implored Cross to teach her pioneering techniques to some of the singers he was working with. Hatebreed's Jamey Jasta was slated to be her first student; he didn't show up, but once word got out that Cross was the guru of growling, members of Slipknot, Sick of It All, Thursday, Shadows Fall, and even Andrew W.K. and Melissa Auf Der Maur arrived at her door. Now Cross is one of a handful of vocal coaches in America working with this clientele, and she is by far the most prominent and sought-after.

"In the beginning, I was a little frightened," she admits with a laugh. "I felt like a little old high school teacher around a bunch of hoodlums, and I thought they were gonna make fun of me, but it was never like that. They're absolutely the nicest guys I've ever met -- they're pussycats."

The feeling is mutual. "Most of her clients are roughneck tattooed metalcore dudes like me," says Lamb of God singer Randy Blythe, who began working with Cross two years ago to expand his range and protect a scream he once figured was indestructible. "But she has this very nurturing thing that sets you at ease."

Cross' myriad vocal and breathing techniques -- which bear names like "The Dump," "Strapless Bra," and "Over the Pencil" -- appear on her new, self-produced DVD, The Zen of Screaming. It's a valuable education for any extreme screamer-in-training, but it can also be entertaining for fans who want to see the burly dudes from the hardcore band Madball doing "Eee-e-e-e-yah" warm-ups while seated at the piano.

"Some of them walk in and they're kinda scared, because they're afraid I'm gonna be a stuffy voice teacher that's gonna tell them not to do what they're doing or to get rid of their vices," Cross says. "But I'm not a Nazi about their lifestyle. I don't care what they drink, eat, smoke, whatever. I say, 'You wanna scream? Here's how you do it.'"

Even though virtually all her clients swear by her teaching methods, Cross says she's run into a handful of detractors, who say that vocal coaching is antithetical to the punk and metal ethos. "Some people say, 'Oh, if you have training, it's not real.'"

Cross' interaction with her clients isn't limited to her studio -- many times she's called upon by either the bands or the labels to go to concerts and troubleshoot. For example, singers will often try to move around, bend over, or stage-dive while singing, throwing off their breathing and technique, she says. Cross has also been known to lead warm-up sessions backstage before the show.

In case you were wondering, Cross says she loves the music, "especially the sincerity and the passion and the power of these genres." And, she adds, through working with these vocalists she's developed a bond similar to the patient-therapist relationship.

"There's something very vulnerable about showing your voice -- it's like showing your underwear," she says. "So when I'm working with someone's instrument of expression, it can get really deep. Sometimes they're like, 'I can't stop drinking, what am I gonna do?' I get that thing. I get that 'My girlfriend is bugging me' thing, or 'I don't think I'm cut out to be this lead singer, I don't wanna do this . . .' And a lot of this stuff goes into a person's performance. So I just listen, and I try to relay a part of my own experience. I mean, I know what it's like to be onstage, I know what it's like to play in a club with three people and nobody cares, I know the lifestyle they're living, I know the feeling that your life is only as good as your last gig, and I try to get them out of that mind-set. My dad was a psychiatrist and my mother was a nurse, so it's in the blood."