The stars of Toy Story 2 let their moves -- and their choreographer -- do the talking. 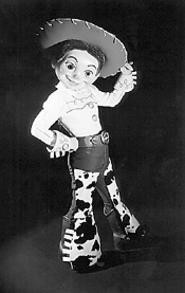 We'd love to ask Mr. Potato Head just how he manages all those complicated moves in Disney on Ice's Toy Story 2, which premieres January 9 at Gund Arena. But alas, the folks at Disney won't grant requests for interviews with the cast's characters (it has something to do with them being toys and not capable of interaction with human beings). So, instead of getting an answer straight from the spud's mouth, we must settle for one from choreographer Barry Lather.

"He has limitations," Lather admits. "But Mr. Potato Head actually moves around pretty good. He's very round. Rex [the dinosaur] is the difficult one, because of his tail. But this is a well-cast show. These are skaters you can just stick in a big costume, and they'll make it happen."

Toy Story 2's plot follows that of the 1999 hit film: Woody is kidnapped by an evil toy collector, and it's up to his friends -- including Buzz Lightyear, Hamm, Slinky Dog, and the green Army men -- to save him. "But there are certain things we have to do our way, on the ice," Lather explains.

Lather is a Disney on Ice veteran (his previous shows include Tarzan and The Lion King), as well as the recipient of an MTV Video Music Award (he's worked with Janet Jackson and Sting) and choreographer of recent Super Bowl half-time specials. Also, he's worked with Olympic gold medalists Brian Boitano, Katarina Witt, and Kristi Yamaguchi. "Working on ice is totally different," he says. "The humongous ice rink is your stage. There really is no front, you have to choreograph in the round."

Or choreograph for the round, in the case of that lovable, rotund potato.