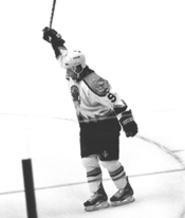 "The word 'damn-near-in-shambles' is an inaccurate statement. It was in shambles."

That's Hank Kassigkeit on the phone, talking about his recent purchase of what may have been Cleveland's worst-run business. Two months ago, the unknown tycoon, who specializes in buying "distressed companies," took the reins of the Cleveland Lumberjacks. The acquisition should have come with a defibrillator.

In the years leading up to the sale, former owner Larry Gordon had moved to Mexico, taking the notion of competent management with him. The team ran up millions in debt, stiffing vendors from Cleveland to Canada. Newspapers and radio stations no longer accepted Jacks advertising. Even a respectable average attendance of 8,000 a game was sleight of hand. Only one in four fans actually paid; the rest came courtesy of ticket giveaways that resembled the Marshall Plan. All of which resulted in a negative balance of $2 million last year.

Into the breach stepped Kassigkeit, who bought the team just days before the season began in October. There wasn't even enough equipment for the opener. A Canadian vendor refused to service the team any longer -- whether Kassigkeit paid cash or not. Only a last-minute airlift from a local sporting goods store allowed the Jacks to suit up for their first game in Grand Rapids.

Worse, Gordon had done little to promote the team. There was no radio contract. No advertising campaign. Precious few season tickets were sold. When the Jacks took the ice for their home opener at Gund Arena, ushers appeared to outnumber fans.

And these were just the beginning of Kassigkeit's problems. "We could sit down and have three dozen beers and discuss this," he says.

But if Kassigkeit just bought the city's largest headache, one wouldn't know by his tone of voice, which maintains a purposeful exuberance. Nor could one tell by the Jacks' play.

Though Cleveland's talk of sport centers on Manny, Sandy, and Chris Palmer's play calling these days, the Jacks have quietly become one of the International Hockey League's best teams. They lead the league in scoring and, for the hockey purist, offer a lineup long on nimble players adept at handling the puck. Chief among them are Christian Matte -- the IHL's leading goal-scorer -- and Brian Bonin, former winner of the Hobey Baker Award, college hockey's equivalent of the Heisman Trophy.

On Friday, the Jacks take on first-place Grand Rapids at Gund Arena, pitting two of the East Division's best teams against one another.

Don't worry about getting a seat. Due to the bumbling of the previous regime, the Jacks are averaging just 3,000 fans a game -- worst in the IHL. The upside: You can get tickets at the gate -- instead of being jobbed by Ticketmaster.